Well here we are...June 1st.  Half way through 2013.  WTH??  When did THAT happen?  I had a few goals in May to try to keep me accountable and well, let's just say this month wasn't the best in terms of hitting goals.  I'm not really sure why, perhaps I just needed to take a mental break from being so goal oriented.  This month wasn't a complete wash out.  I still incorporated some of the things I wanted to, I just didn't do as much of them as I had hoped to.

My big goal was to work on my flexibility and start going to yoga on regular basis.  I went ONCE last month.  I did, however, really focus on stretching and foam rolling after every workout, especially weights.  That has to count for something, right?

My next goal was to get back on the bike on a regular basis and I'm happy to report that has happened.  I now try to ride twice a week.  One long ride on the weekend and a shorter more intense one during the week.  That seems to be working out well.

I've also been trying to aim for at least 2500m every time I swim.  I started off really strong at the beginning of the month but I've now been bumped up a lane again and I'm swimming with folks that are a whole lot faster than me so of course, I'm dying a whole lot sooner than I normally would.  My last two swims I've only managed 2200m and 2100m respectively.  But I know that will change.  I'll get used to the pace and be able to hang on...eventually.

As for getting back on the #plankAday bandwagon...well that has been sporadic to say the least.  I was good for the first week of May and then the wheels feel off that wagon.  I think I was averaging 3, maybe 4 times a week vs. every day.  Oh well.  Something to improve on for next month.

Speaking of which, I suppose I have to work on the above listed items before I can move on to anything else, really.  However, I'm going to add one more thing in - get back out and run with my run group on a more consistent basis.  October will be here before I know it and if I want to break 1:30, I've got to get some speed in the bank.

Make sure you check in with the rest of the ladies in this group.  I know they've all been pretty busy chasing their goals! 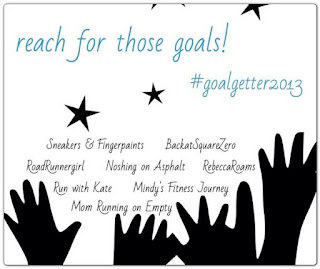 Posted by Phaedra Kennedy at 7:54 AM