This race seems like it happened ages ago but it was only on Sunday!  This week is completely flying by.  Last Sunday marked the first race in my triple header.  I've got another race this weekend (The Bread and Honey 15km) and then another race the following weekend (Binbrook Sprint Triathlon).  I think I'm going to be really tired by the middle of June!

The Woodstock Sprint is the season opener in the Multisport Canada Race series. It's a great little venue that's about 90 minutes from Toronto.  When I first did this race back in 2011 it was a 500m swim, 20km bike and 4.5km run.  This time around they made it a 750m swim, 20km bike and 5km run.  The last time I did this race I was second in my AG.   I had hopes of getting back on the podium this time around.  I figured I'd have my work cut out for me since my cycling took a back seat over the course of the winter;  I didn't really get back on the bike until shortly after Boston.   I was also now 2 years deep into the 40-44 year old AG so I had no idea what sort of competition I'd be facing from some of the younger ladies in the group.  All I knew was that I was going to go balls out for the entire thing and see where that got me.

We arrived shortly after 8:00 am which gave us roughly an hour and a bit to get ourselves sorted in transition, pick up our kits, get body marked and do a warm up swim.  I was a little worried about the water temperature.  I had been watching it all week and because the weather had been all over the place, it never really got too warm.  Granted, it could have been a lot colder but thankfully Pittock Lake is fairly small so the temperature got up to about 63 degrees by race day.  A little on the chilly side for me but it could have been worse I suppose.

G and I made our way down to the water with about 15 minutes to spare before the start.  I waded in while G was fixing his goggles.  It didn't feel too bad at first but that was only because the water hadn't fully seeped into my wetsuit yet.  The further in I went, the colder it got.  I decided to just jump in.  Wheeeee!  It was brisk.  I put my face in and started swimming.  Hard.  I wanted to get my heart rate up and get the blood pumping.  I could feel my feet getting cold. Surprisingly the rest of me felt alright.   I swam back and forth for a while, practicing sighting and just getting a feel for being in my wetsuit.  This was my first open water swim this year.  Nothing like your first race also being your first open water swim of the season!

I finished my warm up and found G.  His wave was leaving 4 minutes before mine so I wished him luck and watched him take off.   Surprisingly I wasn't terribly nervous.  Normally I'm freaking out before the swim start.  I was actually kind of looking forward to seeing what I was capable of.  I've gotten a whole lot faster in the pool so I figured that *should* translate to something in open water if I could manage to swim fairly straight.  My plan was to situate myself off to the side and close-ish to the front.  I figured that would keep me out of the melee but still somewhat close to the action.

The horn sounded and we were off.  I was good for about the first 50 metres then the panic set in.  I couldn't sort my breathing out and I kept inhaling water every time I turned my head.  That just made my breathing worse so I rolled over onto my back and floated for a bit.  I tried to swim again, swam into a couple of people and made it another 15m or so before I started breast stroking.  I then rolled over on my back, panic setting in.  I stopped and looked around.  There were still a lot of people around me, some of them doing exactly what I was doing.  Get a grip.  You can do this.  I rolled back over and started swimming.  The next thing I knew, I was at the first buoy and making the turn.  I swam into a few more people and slowed up again to get around them.  I found some clear water and got into a good rhythm.  Before I knew it, I hit the second buoy.  Sweet only 250m left.  I had started passing people.  I felt good, finally.  I would pop my head up and sight every so often.   The shoreline didn't seem to be getting any closer so I decided to just keep my head down and swim.  I looked up once more and figured I had another 50m or so until I could stand up so pushed a little harder and make sure I kicked hard before I decided to stand up (that's supposed to help direct blood to your legs).

I stood up and ran ashore.  I glanced at my Garmin as I stepped out of the water:  13:37.  Hands down my fastest 750m swim ever.  I ran up into T1, feeling quite disoriented and slightly dizzy.  I had a hard time getting my wetsuit unzipped.  I finally got it down around my waist just as I ran into T1.

This was a gong show.  I was trying to pull my wetsuit off and put my bike helmet on at the same time.  I got my helmet on and continued to yank at my suit.  I couldn't seem to get it off my feet.  There was lots of stepping and pulling before it finally came off.  I tossed it over the rack, grabbed my little towel and quickly wiped my feet off.  On went my socks, then my shoes, sunglasses and race belt.  I grabbed my bike and ran out of T1.  I can't run fast with my cycling cleats on.  I need to work on that.

I had seen a few bikes already racked when I got out of the water so I figured I'd have some work to do.  I hoped that no one would pass me.  My hopes were dashed about 3km into the bike when this woman blew by me like I was standing still.  I looked at her calf and saw 41.  Crap.  About 3km later, I saw her at the side of the road checking something on her bike.  After that I never saw her again so I'm not sure what happened. It was just as well because I had some serious work to do.  I put my head down and just hammered.  My legs felt incredibly flat but I kept pushing.  I caught a couple of ladies in my AG but I had no idea how many were left.  The bike course is fairly flat which given my lack of climbing strength right now was a good thing.   I rode most of the course in my big chain ring and I figured that my legs would probably pay for it a bit at the start of the run.

I rolled up to the dismount line and shuffled my way back into transition.  The run into T2 is downhill and while I'm generally all for letting loose on the downhills, I prefer to do so in running shoes vs.  cycling shoes.   This transition went much smoother than T1.  I think I can shave a few more seconds off it though.

This is obviously my strongest leg and where I hoped to catch some of the leaders in my AG.  My legs actually didn't feel too bad once I started running.  I didn't bother easing into it.  I ran like a madwoman out of transition and proceeded to pick people off.  I saw G coming back in and high fived him as we passed.   I checked the calf of every woman I caught.  40-44?  Nope...NEXT!   I was definitely busting a gut out there.  The temperature was absolutely perfect though.  The sun was shining and there was a bit of a breeze so I never felt like I was overheating.  I really like the run course at this race.  It's part gravel trail and part pavement.  The gravel makes going really fast a bit of a challenge if you're not light on your feet.  I grabbed a mouthful of water just before the turn around and continued to reel people in.  I still hadn't seen anyone in my AG yet.  Weird.  Then, about 400m from the finishing line, I caught a woman.  I looked down at her leg and saw a 44.  Sweet!  I surged by her and rounded the bend towards the finish line.  I hoped that was enough to get me on the podium.
I crossed the line almost neck and neck with an older guy who was determined to not let me pass him.  No matter, it made for some good racing.  I crossed the line and made my way over to see G.  Jason Vurma congratulated me on a great race.  I had no idea what my official finishing time was.   It was the first time I raced with my Garmin and I actually stopped it by accident when I was heading into T2 off the bike.  After that I had no idea what I did so I knew that whatever time it showed would be incorrect.

We made our way over to get our Hero Burger (really my favourite part of the race) and post race chocolate milk and then we flopped down in a patch of sun on the grass.  Of course I wanted to stick around see how I did.   We were also waiting for my friend Barbara who was racing the Swim / Bike.  She had finished before both of us and was off socializing with her teammates from the Toronto Triathlon Club.   She ended up winning the under 39 age category.

We checked the results and they still hadn't updated them yet so I went into transition and packed everything up.  They said they'd be announcing the awards soon so after I packed up I went back to the results posting and they were literally just being updated.   I scanned through the list and found G's name:  1:20:01:01.  He was at the bottom of the page.  I looked at the top of the next page and much to my surprise, I see my name.  My time:  1:20:01:02.  G beat me by 1/100 of a second.  What are the chances of that??  That is probably the ONLY time I will ever be that close to him in a race again.  I scanned across the line to see where I placed in my AG and to my delight I saw 3/21.

YES!  I had made the podium.  When I checked my splits, I knew there was room for lots of improvement.  Especially in the swim and T1.  Hopefully I've managed to get the cobwebs out.

I think as long as MSC holds this race here, I'll continue to do it.  It's such a great venue.

The medals this year are much nicer than in years past.   I hope to add a few more to my collection over the course of the summer! 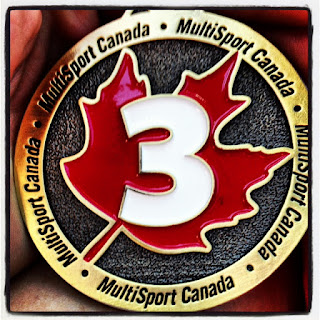 Posted by Phaedra Kennedy at 9:25 AM