Hello, is it me you're looking for..?

Yes, I'm alive!  And maybe you weren't looking for me, LOL.  I totally just dated myself with that title...

In all my years of writing this blog, I've never taken a hiatus this long (almost 5 months!!).  Truth be told, I've been spending most of my time over on Instagram.  But, there's something to be said for the written word so I'm back.

A little catch up for those of you that don't follow me on IG.  We came back from Florida at the end of March to less than stellar weather in April.  I didn't actually get outside on my bike until May 1st.  But, this summer has more than made up for our lacklustre spring.  It currently feels like a jungle outside it's so wet and humid.  But I will take it.

Race wise, I crammed 3 races into 6 weeks.  Maybe not the best idea, especially since 2 of the 3 races were sub-par performances.  Back in June we did Hawaii 70.3.  I had no real goals for this race because I wasn't sure how the heat would affect me.  I did my very first open water ocean swim and I absolutely loved it.  It was my favourite part of the race.  The bike course was the middle 1/3 of the Hawaii Ironman course - it was essentially one big climb and then a descent.  I had hoped to come in around 3 hours and I just squeaked under that in 2:58.  It was hot and windy and that kinda cooked me for the run.  The run took place on a golf course (yup, we ran on the greens!) and it was a mix of grass and pavement along with some pretty short and steep hills.  I ran at comfortable pace for the first 17km and walked through every aid station on the first lap to make sure I drank and got ice and cold sponges.  The second lap I went through the first few then at 17km decided I had enough in the tank to drop the hammer so I did.  I missed the podium by just under 2 minutes.  It wasn't my goal to get there but knowing how close I was and where I could have made that up, bugged me for days afterwards.

The trip itself was amazing.  We had a blast with our friends and I'm so glad we opted to go because I don't think we ever would have gone there otherwise.

Two weeks after I got back from Hawaii I did the Welland Long Course race.  I had a horrible swim a decent bike and a fantastic run.  I clawed my way into 2nd place in the last 400m of the run.  It was really nice to finally nail a solid run off the bike.  I thought that bode well for me for Muskoka two weeks later. 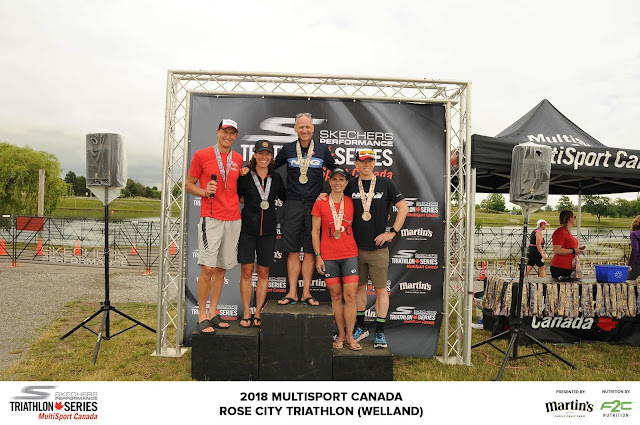 Muskoka 70.3 was my goal race of the season.  That was where I hoped to qualify for the 70.3 World Championships.  My AG was pretty stacked.  They changed the bike course so it definitely played to my strengths - less steep climbs, more rollers.  But, I did not have the day I hoped to have.  My swim was alright but as soon as I got on the bike, my legs felt flat and my heart rate was super elevated.  I rode well within my power range but watched the watts I could hold drop throughout the race.  With about 15km left on the bike I threw up.  I was drinking my race fuel and it went down and then came right back up a few minutes later.  I was aiming for a 2:40-2:45 bike but I came in at 2:49 with legs that felt like lead.  I went flying out of T2 and as I got going my legs felt a bit better.  At least for the first 2km and then I started to get a side cramp.  That's when everything started to go sideways.  I started to have a tough time keeping nutrition or fluids down.  Every time I drank, I felt like I was going to throw it right back up so there was a lot of stopping and walking.  My stomach was not happy.  I suffered through that first loop and then I finally clued in that I should try to have some flat coke or pepsi because I know that settles my stomach.  So that's what I did at the 9km mark and by the 11km mark I felt better.  I started taking in a bit more fluid / nutrition but the damage was done.  I was running on fumes.  I did manage to catch 3 women in my AG though but it still wasn't enough for a podium spot.  Once again I missed the podium by 2 minutes.  I was heart broken.

I knew there was only one Worlds spot in my AG so I figured there was no way I'd get it but, I thought I'd stick around anyway just in case a spot rolled down.  Patience has never been one of my virtues but it certainly paid off in spades that day.  The woman that won the 60-64 AG didn't show up so her spot rolled down to my AG, which was the biggest and myself and another woman wanted it.  I finished ahead of her so I got the spot.  I started crying.  Definitely not the way I wanted to get the spot but, it's done.  I'm headed to Nice next year and I can't wait! 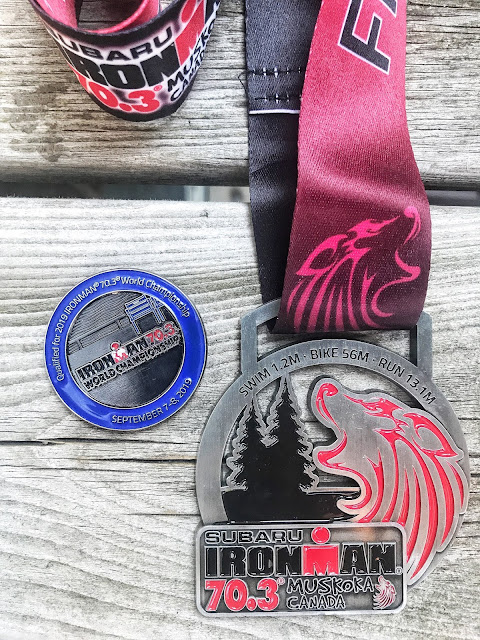 I am currently enjoying a very unstructured summer.  I really feel like I needed a mental break.  I lost that fire that I had at the beginning of the year and I need to find it again.  So right now, I'm not thinking about next year.  The most planning I've done is paid for the race and booked a place to stay. I am very torn about my goals next year - if any.  Part of me wants to muck about like I did this year, but maybe with a *bit* more focus and only do the 70.3 WC, with maybe a few sprint races thrown in.  The other part of me wants to see what I'm really capable of with some guidance and someone to be accountable to and tackle one, maybe two 70.3's leading up to the WC in September.  That also means I NEED to stay healthy and of course I can't help but think about the last time I worked with a coach, I ended up getting injured and not being able to race.  But, I didn't realize I had all these underlying issues so, there was that.  Now that I know there are certain things I need to be doing, hopefully I will be better off....

I also have to realize that I may have to give up some of the things that I really enjoy, like riding with Morning Glory.   But, I also know that I was incredibly dissatisfied with both my 70.3 race performances this year so there's that.  The question I am currently wrestling with is, how bad do I want it?

Only time will tell.

I may not post every week, but my goal is to get back on here and share training tips and some of my adventures.  I got tired of posting weekly recaps - it just felt a bit redundant and I'm sure it didn't always make for interesting reading.  So, my goal is for this blog to be a place where I share my knowledge as much as possible with some stories thrown in for good measure (and entertainment of course).

It's nice to be back!