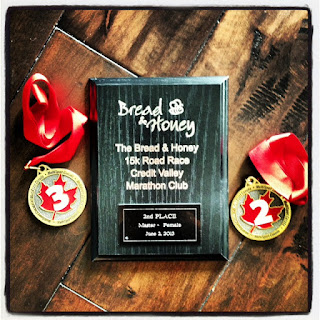 Gotta say, the running race was the hardest.  I hurt way more after that race than I did after either triathlon.    Must be the really good warm up I get before I hit the run portion of the race, ha ha.

To say that I'm thrilled would be an understatement.  I'm PUMPED.  Yesterday's race was a little longer than the previous one I did in Woodstock.  The swim was the same distance, the bike was an additional 10km (30km instead of 20) and the run was 7.5km instead of 5.   That extra 10km on the bike totally put a beating on my legs.  The little work I've been doing on my cycling seems to have paid off though.  I managed to average just over 33km per hour on the bike, which I've never been able to do so I must be doing something right.

I got through the swim with only one minor panic episode which was HUGE for me.  I swam off course multiple times which probably added about 50m to my swim but whatever.   This time around I situated myself at the front off to the side and I think that was a good option for me.  I'll do that again next time.

It was my first time doing this particular race so there will be a separate race report hopefully in the next couple of days.   Suffice to say I'm pretty tired.  I opted to take today off and just be lazy.  I'll pick things up again tomorrow at the pool.  I'm also looking forward to not having to get up at some ungodly hour of the morning next weekend to race.  As much as I love to race, I need a bit of down time as well.  G and I will be back at it the following weekend (June 22) to race another triathlon in Welland.  Apparently that one is very flat and fast so I'm looking forward to seeing what I'm capable of with few more weeks of cycling as well as some good solid rest.

Did you race this weekend?

Posted by Phaedra Kennedy at 4:01 PM

Congratulations!!! You can tell how long I've been out of the loop. Last thing I knew you were in marathon recovery mode.

This is exciting, and you seem to be getting stronger and stronger :-). Does it feel that way?

Ha ha ha...it's amazing how time flies. I *think* I'm getting stronger but for me, the true test will come in the fall when I run my goal half marathon.

Just to be lazy? You are a machine that walks away with hardware, which is amazing. Running is hard enough for me, now you are throwing cycling and swimming into the mix? Love it and congrats.

he he he, thanks Pavey! I am a runner first and foremost but triathlon is a close second. I actually think that cross training has made me a better runner. :)

Holy crapola! Way to go P! You are having an amazing start to your tri season :) Just read your recaps. I hope that all the swim/spin cross training I do helps to make me a better runner too!