Monday Musings: Back into the Hills

This past weekend G and I went out to Muskoka to do Spin the Lakes, something that is becoming an annual tradition with our friends.  Last year, I was just getting back on my bike after about 3 weeks off due to my injury.  I couldn't run but I could ride, so I was happy to be able to do something.  I had signed up for Spin the Lakes well before I got injured and the original plan was to race it.  That didn't happen last year so I figured this year it I'd make up for it.  Spin the Lakes is essentially the Muskoka 70.3 bike course.  It's pretty freaking evil.   So I thought this year it would be a good idea to take my TT bike for a rip through the hills.  Because Tremblant has some pretty evil climbs at the end of the race, so it's best to be prepared.  Right?  No matter that I've only ridden my TT bike once outside since Florida ha ha.

It would also give me an opportunity to test my fuelling strategy as well as my new power zones.  When I did my zone calculations, I was a little surprised at what my race power was supposed to be.  I felt that it was probably a bit too high for the distance I was tackling so I figured I'd aim for about 10-15 watts lower for the first half and see how I felt.

We got to Hidden Valley with just under an hour before the event started so we went up and picked up our t-shirts, meal ticket and raffle tickets and then went back to the car to get ourselves sorted out. I got Tom Sawyer ready to roll.  I went to fill up my aero bottle when I noticed it was leaking everywhere.  I tightened it up and started filling it again.  Still leaking.  So I took it out of the holder and took it apart.  The lip along the inside had started to warp so the lid wasn't sitting flush.  ARG.  So much for using that.  I emptied the bottle back into my regular bottle and put it back on my down tube.  Now I just had to remember to drink.   I had made 3 bottles of E-Fuel, I had GU vanilla spice Roctane and 1 coconut cream Lara bar cut into thirds.  My goal was 57g of carbs per hour (1g of carbs per kg of body weight) so the bottle of E-Fuel + 1/3 of the Lara bar should technically be enough.  I had the gels as a "just in case".

My plan was to ride this solo, meaning that I didn't want to draft off anyone.  I wanted to treat it like a race.  G and I lined up in the start chute, towards the front.   There was a combo of people in road bikes and some people on TT bikes like myself.  I figured the first few kms would be a bit hairy since we descend and climb right away when we're leaving Hidden Valley and there isn't really room to spread out unless you hammer it right from the start, which I didn't want to do.   I knew what that first 10km was like, hammering it was not the smart thing to do.

We rolled out and I stuck with the group for the first 2km or so.  As the hills started, the group started to thin out.  I climbed the first few hills in my big chain ring, trying to get around groups.   In hindsight, that wasn't the smartest thing.  I worked it through here trying to get around the packs of people.  Eventually things really spread out.  I stayed in aero for as long as possible between groups.  I tried to stay in aero for as long as possible on every climb.  I was feeling really strong despite the heavier bike.  My TT bike is so much heavier in comparison to my road bike and when you're climbing that extra weight makes it really tough.

I settled into a solid groove down Dwight Beach road and onto highway 35.  I stayed in aero for pretty much this entire section unless I was passed by a pack, which happened a few times.  I'd sit up, soft pedal, let them go by and get right back into aero.  Despite my bottle malfunction I was still managing to drink often.  The bigger issue was that I couldn't really see my power meter.  It was below my line of sight so I had to look down to see what my watts were.  Not convenient.  Every time I looked down I was anywhere between 170-190w.  Or well over 200 if I was climbing.  Not good.  I tried to slow things down a bit and I really took things easy on the downhills, I just let gravity do the work.

I rolled into Dorset to the first rest stop.  My plan was to ditch my arm warmers, use the porta potty and hit the road.  I didn't want to stop for long.  The black flies were really bad as well so I was in and out of this stop really quickly.  I had gone through one bottle in just over an hour so I took my 1/3 of my Lara bar, switched out my bottle and hit the road.  I climbed out of Dorset to the 117.  I knew once I got onto the 117, it would be hammer time.  I caught a group just as I turned onto the 117 and they stuck with me for a long time.  There were about 11 of them.  I stayed in my aero bars and trucked along.  It was windy along there so I was working harder than I probably should have.  But, I wanted to see what I could do.   There were a few big climbs along here that I opted to do in my smaller chain ring.  On the second one, the group decided to pass me.  They thanked me for the pull and told me to hop on.  I said no thanks, I didn't want to draft.  Off they went.  On the next downhill, I caught and passed them all again.  On the next big climb, some of the group passed me again.  I let them go.

One of the girls stuck with me for the remainder of the ride along the 117.  I could hear her right on my wheel.  We trucked along for a while.  We saw a beautiful fox run across the road.  That was a treat.  I thought she might stay with me when we turned onto Baysville but she opted to stop at the rest stop.  I kept going.  I didn't want to stop.  This section had a lot of rollers.  I was surprised at how quickly I made it along the 117.  I had a feeling I was going to pay for it.  My legs were still feeling ok but I knew the next 30km were going to be tough.  I switched up my bottle and put a full one on my down tube.

By the time I was 80km in my legs were telling me I went too hard.  I had 17km left and I knew it wasn't going to be easy.  I think had I been on my road bike, it would have been easier but alas I was on my heavy TT bike.  I just told myself I was building strength.  This was exactly the type of workout I needed 5 weeks out from Tremblant.  Those last 17km were absolutely brutal.  My legs were screaming at me.  All the short steep climbs were just killing me.  I got out of my saddle so many times.  As I made that last descent towards Hidden Valley, all I could think of was the fact that I just wanted to get off my bike and that I had ZERO desire to run.  As I came bombing down the hill, I saw G at the car.  I figured if he was waiting for me, I wouldn't be running.  I rode up to the top of the hill and the finish line, spun my legs out around the bend and turned around to come back down to the car.  I was done.  No way was I running.  I''m pretty sure come race day I will regret that decision.  Those efforts make you stronger over all.  Even if I had done 15 minutes of running that would have been better than nothing.  But I didn't.   It took me 3:12:45 to ride 97.5km.  That's an average of just over 30 kph with over 1000m of climbing.  I'd be lying if I said I wasn't disappointed when I finished.  I had expected to be faster, especially with all the riding I've been doing.  But when I sat down afterwards and looked at the course and the fact that I didn't draft at all, I'm pretty happy about it.  For those of you interested in the numbers, my normalized power for the entire ride was 189 watts.  Way higher than I wanted to be but proof that I can ride close to that intensity, I just need to trust in my abilities!

That was the big ride of the week.  The rest of my week was pretty easy compared to that.  This is how it all rolled out.

Tuesday:  19.8km of hills leading the Toronto Triathlon Club ride.  Thanks to Eric D'Arcy for this pic and the for help that day.  Awesome group that came out for my first ever group workout.  Looking forward to more hills tomorrow!! 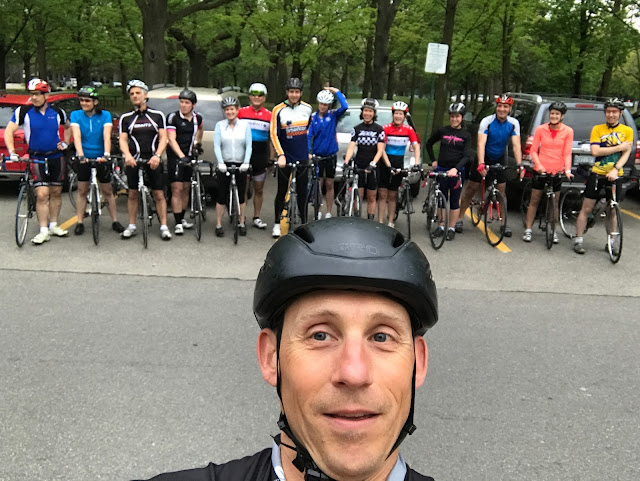 Thursday:  Since it was totally pissing rain, I stayed inside and did my first ride on ZWIFT.  It was just over 25km in 45 minutes.  Despite the rain, I went out and ran.  I did 6km at race pace and in the process did something to my hamstring.  It was super tender afterwards.  Time to go see my ART guy this week. 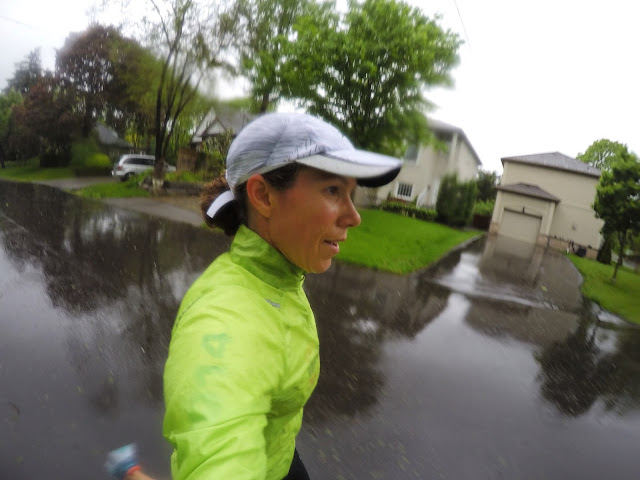 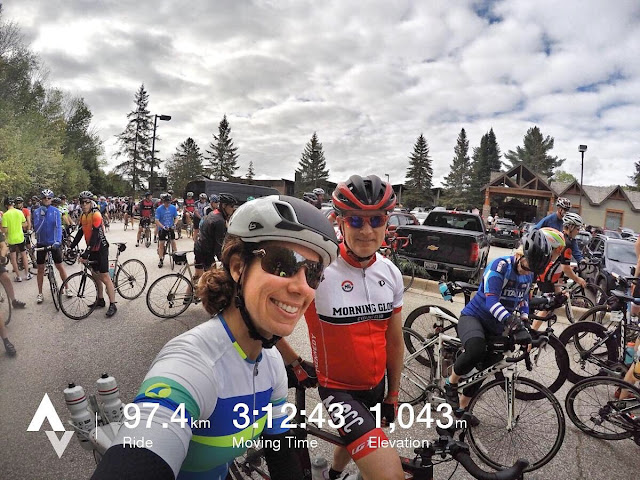 Sunday:  13km run.  This was supposed to be closer to 20km but David and I were both spent so we opted to cut it short.  We ran on the new Muskoka 70.3 run course.  It's definitely better than the old course.  Still hilly but not as many rollers which is nice. 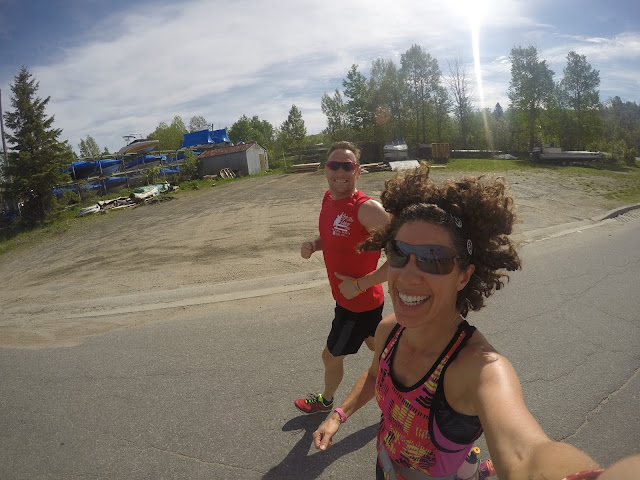 Only two more weeks of training before it's taper time!  It's also time to get into some open water!  Here's hoping the weather holds up for the next few weeks so we can head up to the quarry and get some swimming in!

I hope everyone had a great weekend and to all my US pals, have a wonderful Memorial Day xo


Posted by Phaedra Kennedy at 4:54 PM