Oh hello June!  Here we are half way through 2017.  Time is just whizzing by.  We have THREE weeks left until Tremblant!  THREE.  Holy crapamole.   We've been occasionally checking the water temperature in Lac Tremblant and a couple of weeks ago it was a balmy 6 degrees celsius.  Thankfully it's now gone up to 15.2 which means that hopefully in another 3 weeks it's closer to 18 degrees which would be perfect.

Not to sound like a broken record (I'm going to) but the weather really isn't helping in terms of warming things up!  The Caledon Quarry that we normally swim at delayed it's opening slightly because the water temps were still quite cold.  It finally opened earlier this week and we opted to head out there Saturday morning for our first open water swim in Ontario.   Luckily the weather was in our favour (thank you Mother Nature!)  It was sunny, with very little wind and it was 14 degrees.  So not totally balmy but not cold either.

There was a small group of us, pretty much all women, save for G, ha ha.  We got ourselves suited up appropriately.  And by appropriately I meant with booties and a neoprene cap for good measure.  I had stuck my hand in the water when I arrived and it was FRESH.  So I could only imagine what it would feel like when I fully submerged myself.   Pro tip:  to help keep the cold at bay, I was told to wear ear plugs.  Apparently your ears have receptors in them that are sensitive to temperature so if you wear earplugs, it helps keep your temperature regulated in cold water.  I tried this on Saturday and it worked.  So much so that I ended up having to take my neoprene cap off part way through the swim.  It also helped with my balance when I was getting out of the water.  Normally I feel a bit woozy after an open water swim but I felt totally fine.  I'm a CONVERT. 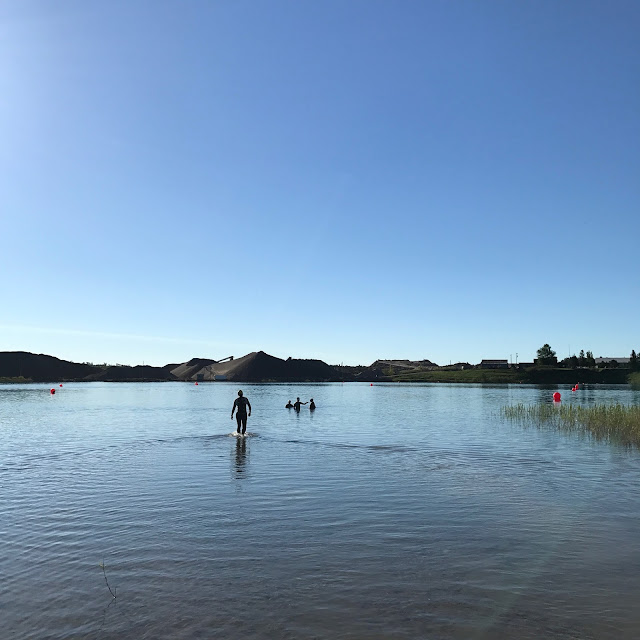 We waded in and took our time getting used to the temperature.  It did take your breath away for the first little bit.  I walked in to just past my waist and then dunked my head.  That really made me gasp but I was ready to start swimming so I swam out to one of the buoys and then swam across to the start buoy.  I was going to stick close to shore so I could swim in quickly if I got too cold.   As you can see by my Strava map, I did NOT manage to swim in any semblance of a straight line.  I swam back and forth for a bit and then stopped to adjust my wetsuit.  I hadn't pulled it up high enough so the range of motion in my arms felt very limited.  Once that was fixed I was good to go.  I swam two
400m loops before my hands felt like they couldn't really do much anymore.  My arms were tired and it felt like I was swimming in slow motion.  I had covered just over 1200m total so that was enough for me.  The best part?  ZERO panic.  None what so ever!  I think I'm finally getting comfortable with this open water swimming thing.  :)

That was the big adventure this week!  I'm hoping to get a few more OWS in before we head to Tremblant on the 22nd.

I'm heading into my last big week of training this week as well so here's hoping that it goes as smoothly as this past week went!

Monday:  43.5km ride.  Normally I take Mondays off as a rest day but G had the day off (Memorial Day) and it was so beautiful and sunny out that we decided to go for a ride.   We drove out to Guelph Line and did a little rip around Campbelville.  It had been a while since we'd ridden out that way.  My legs were still feeling a bit tired from the weekend but I wasn't about to turn down an outdoor ride with G in the sunshine. 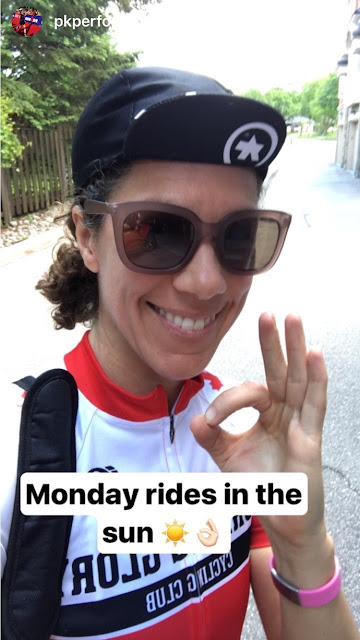 Tuesday:  8km run - hill repeats in a.m. and 22km ride - TTC hill clinic in p.m..  Since I rode on Monday and I knew I'd probably riding that night, I opted NOT to ride with Morning Glory and I slept in.  I don't think my legs could have handled the beatdown they would have gotten doing 5 laps of Edenbridge.  Instead I opted to do running hill repeats at lunch.  Holy sweaty.  My hamstring was still proving to be bothersome so I made the call to Pivot to go see my ART guy.

Wednesday:  2200m swim.  I actually felt pretty good today despite the fact that it was short sets of sprints.  I'm definitely not a sprinter but I like trying to go fast.

Thursday:  8km run with my friend David.  My hamstring was still kind of bugging me even after some dry needling the night before so we kept the effort fairly easy.  David was still pretty wiped out from the weekend and the previous days workout.  My legs actually felt really good other than my hammy. 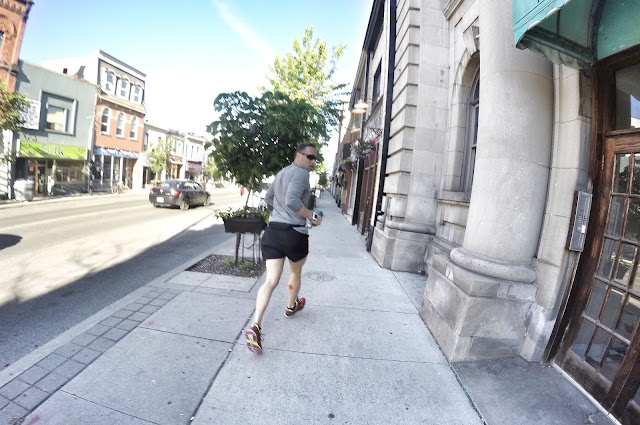 Friday:  37.5km ride - High Park Hot laps in a.m. and 2100m swim at lunch.  I had originally planned on doing the Real Deal Thursday night Time Trial but just couldn't get my ass out of the house so, I got up early with G on Friday and we met up with the Morning Glory development ride.  Holy crap was it ever a big group.  I managed to hang on to the first group for about 5 laps and then I caved.  I was pretty pleased with myself.  I did 12 laps in total.    I missed my masters swim because I went and rode instead so I made up for it with a swim at the York Rec Centre at lunch.  I felt really good today and swam about half my workout with pull and paddles, which is not normal for me but I need to work on my upper body strength so those have become a necessity.

Saturday:  1200m open water swim, followed by a 75km ride, followed by a 4.2km run.  This was the BIG day.  I actually felt really good for all of these elements, with the exception of the end of the ride.  I have been complaining to G that my hamstrings seem to be doing all the work even when I'm on my tri bike.  I honestly can't seem to get my quads to engage.  I have seen someone about that and there will be a post about it in the future.  But towards the end of the ride, I really felt that my hamstrings were fatiguing.  On the run, my legs felt a bit better, it felt like I was using all of my muscles but it took a while for that to happen.  Very strange indeed. 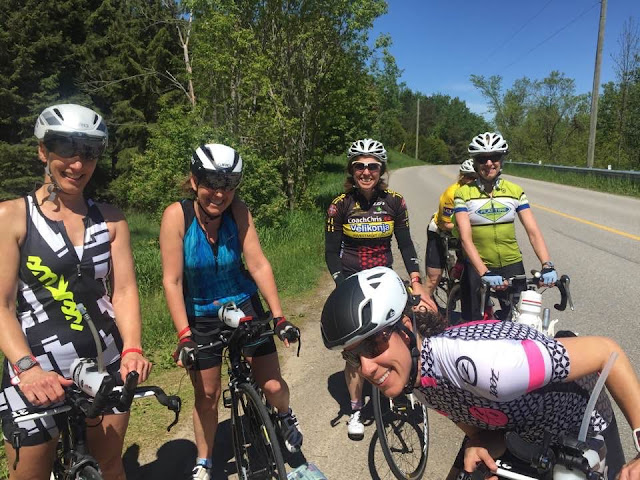 Sunday:  3000m swim, followed by an 18km run with 8km at Z3 building to Z4.  This was hard but I felt strong and my pesky hamstring was no longer bugging me.  The only thing that was bothering me was my left glut.  And even then, towards the end of the run, I didn't really notice it until afterwards.  Then it was uncomfortable to sit on that side.  That's my good old piriformis doing all the work.  But I was pretty happy with these workouts and I was definitely ready for a rest day because that was 13 straight days of training.   I'm actually surprised I felt as good as I did these last few days.  I was definitely fatigued on Sunday morning, but once I did my run, I was a-ok.  I slept like a baby last night and got a full 8 hours so I feel very well rested today.  My legs are a bit sore but that's to be expected after a hard run yesterday.

This is the first time in a VERY long time that I've actually done all my prescribed workouts for the week!  Here's hoping I can carry that momentum over to my last big week of training!

How was your week of training?  Anyone else wonder if summer is ever going to show up??

Have an awesome Monday! 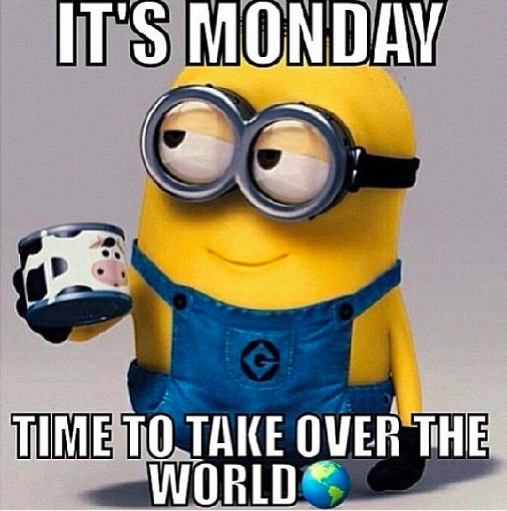 Posted by Phaedra Kennedy at 2:14 PM