We go out in the world and take our chances....
Fate is just weight of circumstances....
That's the way that Lady Luck dances.....

I ran into T2 in my cycling shoes and shuffled over to my spot in transition.  I racked my bike, took off my helmet and then took off my shoes.  My feet were actually still damp so I had to dry them off before I could put my socks on.  Even then getting my socks on was a struggle.  In retrospect I should have chosen a different pair of socks but these matched my outfit so of course I had to wear them, ha ha.  It took me a solid minute to get both pairs on as well as my shoes and race belt.  I grabbed my hat, sunglasses and gels and started running.   I put my hat on as I exited T2 and shoved my gels in my pockets, keeping one out and ready to go.  Surprisingly my legs felt ok.  They didn't feel tired.  What was really bothering me was my left glut and upper hamstring.  It hurt.  I felt like the nerve was being rubbed.  I didn't want to try to change my gait because that would really mess with things.  So I plodded on.  My Garmin beeped and I looked down to see 4:39 for the first km.  Whoa.  I didn't feel like I was running 4:39/km.  It felt comfortable.  That was a good thing.

I spent a lot of time running hills in my training leading up to Tremblant and it totally paid off.  I scampered up the first big climb like it was nothing.  I figured the rollers leading into the village of Tremblant wouldn't pose too much of an issue for me since I had done so much hill work.  I was chugging along, passing people, feeling pretty good, other than the fact I had to pee.  I had to pee at about 60km on the bike but I didn't want to stop and by the time I got onto Duplessis, that sensation went out the window, probably because I was working so hard.  But out on the run, I started to get uncomfortable. I thought perhaps I could run through it but I know that when I have to pee, I usually stop drinking and that wouldn't be a smart thing considering I was only 3km into the run.  So just before I started climbing into the old village, I stopped at a porta potty.  Luckily I didn't have to wait.  As much as I love my one piece tri suit, getting  in and out of it while sweaty is a pain in the ass.  I was in the porta potty for at least a minute, probably closer to a minute and a half.   But once I got out, I felt a million times better and started to pick up the pace again.

I had no issues with the hills leading into the old village and my km splits remained in the 4:40 range (other than the porta potty stop).  I knew that once I got onto the rail path, it was a false flat going down hill on the way out so things were going to feel really easy, which they did.  I settled into an excellent rhythm.  I'd grab water and the occasional gatorade at aid stations but what I really wanted was a coke.  I finally got one at the second aid station on the path.  Ahhhh.  So.  Good.

Since the run course was an out and back, I figured I'd see G so I kept my eyes peeled for him.  I saw a lot of the top age groupers on their way back, including Rob Wheeler, a guy we ride with from time to time.  I saw a few other Zoot athletes out on the course as well - easy to spot in our awesome kits!

I was ticking off the kms fairly comfortably.  I didn't feel like I was pushing too hard.  The pace felt sustainable.  I was figuring my average HR was probably around 155-157.  I don't know that my legs could have gone any faster even if I wanted them to.  I figured at the pace I was running I'd probably come in around 1:42-1:43, if I could sustain it for the entire run.  I finally saw G as I got closer to the 9km mark.  He had made the turnaround and was on his way back.  I'd say there was probably just under 2km that separated us.  He looked like he was running really well.  Old me would have had the speed to catch him for sure.  But, current me did not and wasn't even going to try.

I got to the turnaround and started the trek back.  I was halfway done.  Coming back I watched my pace start to drop a bit.  The sun was out in full force so it was getting a little hot and I was running up hill.  It was slight, but enough that it affected my pace.  I grabbed another water, coke, then gatorade.   I started seeing some familiar faces as a lot of my friends were now on the run.  I saw my friend Lois and I saw Nathalie again - we exchanged high fives and whoohoos, as you do, ha ha.  I had actually managed to catch a couple of women as well.  Once again, I wasn't sure if they were in my AG or not but I passed them both decisively.

At about the 14km mark, I was starting to hurt.  I told myself I only had 7km to go.  35 minutes or so.  My legs were starting to feel it.  I am chalking this up to a few things, mainly my lack of longer runs off the bike.   The next aid station, I stopped and walked through it, grabbing water and coke again.  I made sure not to stop for too long as it hurts like hell to start running again after standing around.  Soon I was at the 16km mark and the suffering was really starting. 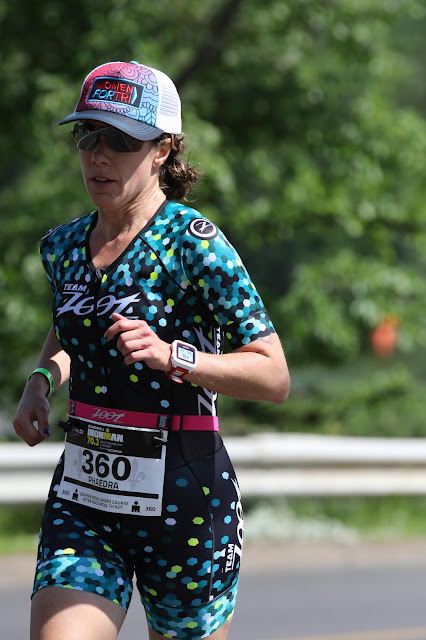 So what did I start doing?  I started smiling.  An IG friend of mine had commented on one of my pre race posts and said "Smile every mile".  That stuck with me and when the going got tough, I started to smile.  It seems counter intuitive but honestly, it made me feel better.  Maybe not 100% but it made a difference.

At the 17km aid station, I stopped to grab another gatorade, coke and water.  I opted to take my last gel and instead of running and eating it, I stopped and stood at the aid station.  My legs were feeling it.  I ate the gel, grabbed another water to wash it down and I was off.  I hoped that it would give me enough energy to power through the last 4km because I was really starting to hurt.  My right quad was feeling crampy and my calves were sore.

As soon as I got out of the village, I knew the end was near.  There were spectators peppered along the road leading into the ski village and I smiled at each and every one of them.  I rounded the bend past the swim start and climbed the hill.  There were people walking.  Once again, I had no issue getting up it and I passed a couple more women.  I could hear the DJ and people cheering.  When I got to the bottom of the hill, there were people everywhere.  I started grinning from ear to ear and high-fiving people.  Anyone that had a hand out, I was going to hit it.  I passed the 20km mark and started to pick up the pace.  I also started to get emotional.  There were a few tears shed for sure.  I couldn't believe that I was almost done.   It felt like my first 70.3 all over again.  I caught two more women as I made the turn around the driveway of Hotel Quintessence.   The crowds were insane along here.   I made my way down the through village, right by the same spot I stood cheering last year and got choked up again.  STOP CRYING.   I composed myself as I followed the turn of the finishing chute.  Only a few hundred meters to go.  I ran into the open area just before the finish line and raised my fist in the air and yelled YES with a huge grin plastered on my face.  I glanced up at the clock and saw 5:35 something but that meant nothing to me because I had no idea what time I started at. 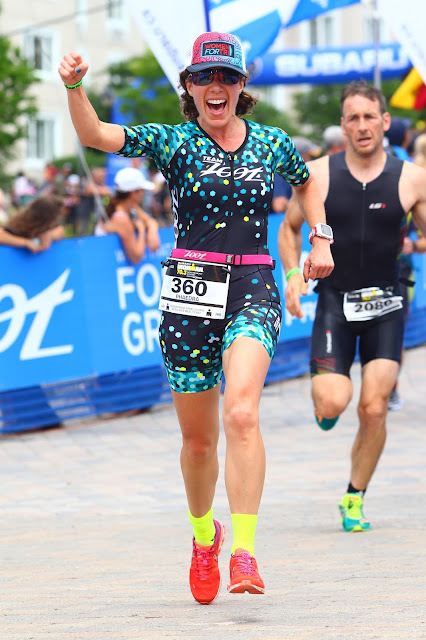 I heard the announcer call my name as I came towards the line.  I jogged down the ramp and started walking.  I had stopped my watch when I crossed the line but was so darn happy I was finished, I didn't even bother to look.  I wanted to find G.   I found him right away and I hugged him and started crying again.   I was overcome with emotion.  What a perfect day.   I collected my medal and my finishers hat and we immediately got in line for poutine.  I wasn't messing around.  I was hungry.  It was only then that I looked down at my watch and saw the total time.

My official time was 5:09:44.  I didn't start my watch right away when I went into the water and, I stopped my watch by accident on my way out of transition so I lost some seconds there.  My final run time was 1:44:48 and I went from 10th to 6th.

I was positively gobsmacked.  I was hoping a good day would net me a 5:15 or so.  I didn't think I'd manage anything faster than that.   I went into this race with zero expectations in terms of where I'd end up in my AG.  I knew that I was a fairly strong athlete so I figured I'd probably end up in the top 10-15 at least if I didn't have any mechanical issues and depending on who else showed up.   That time got me 6th in my AG.  If I had raced last year and gotten that time, it would have put me in third.  The top 3 women in my AG went sub 5 hours.   That is just plain CRAZY.

I am absolutely thrilled at how the day unfolded.  We had fabulous weather, I remained calm during the swim, I nailed my power numbers, and managed a decent run.  This gives me a good benchmark for things I can work on for Placid.  I was less than two minutes out of 5th place and I know exactly where I lost it.  So, moving forward, I will be working on faster transitions as well as just making sure I get even stronger climbing on my tri bike.  And of course, I will be putting in a bit more speed work on the run, along with continued hill running because like I said yesterday, Lake Placid ain't flat.  That run course is no joke.

I want to give a massive shout out to everyone that wished me luck - THANK YOU!  My awesome health care crew also deserves special mention as they helped to keep me in one piece this year:  Dr.  Peter Lejkowski at Pivot Sports Medicine and my RMT and pal, David Lamy.  And of course, G, without him, I wouldn't be doing this crazy sport.  He introduced me to it all those years ago and I am forever grateful.  Here's to crossing many more finish lines together.


Posted by Phaedra Kennedy at 8:23 AM