Slowing Down and Catching Up

After last weeks insanity, I could finally see a light at the end of the tunnel.  With no impeding jobs looming on the horizon, I knew I'd finally be able to catch up on all my goings on outside of work.  I can't even begin to tell you what a relief that is.  I was actually able to take last Friday off.  G was going up north for a boys golf weekend so I had the house to myself.  FUN!

Friday morning was spent at Gears testing out saddles (am trying out the Adamo) and getting my fit re-tweaked.   Friday afternoon was spent poking around the new Target where much to my surprise I found my leave in conditioner that I usually get from my hairdresser!  It was $3.50 cheaper too AND, it's much closer to my house than my hairdresser is.  SCORE.  I did a bit of wandering around Winners in Cloverdale and then went off to meet my friend Jon for an early dinner at my fave burger joint - Woody's - for a pint and a burger.  It was so nice to catch up with him!  And I finally got to try my friend Andy's beer.  He is part of the Oast House Brewers and I've been dying to try their beer.  It's not available at the Beer Store or LCBO just yet, you either have to go to the Brewery in Niagara on the Lake or you can get it a various pubs across the city.  Woody's just started to carry it so of course I had a pint with my turkey burger.

I was home by 7:00 pm so I actually sprawled out on the couch and rented a movie....again!  I know!  That's two weekends in a row!!!  I rented Star Trek Into Darkness and I loved it.  I was a Trekkie nerd growing up so I thought it was a pretty good modern representation of the characters.  It was so nice to just chill out and be entertained.

Saturday morning I was up bright and early to meet with my friend Caitlin.  She is going to be my guinea pig for the practical component of my coaching certification.  We headed off to the track so I could take her through a whole barrage of tests.  We were there for a couple of hours.  It was good fun.  It helps that she is an eager participant.  She's excited to get started and I know she's 150% committed to putting in the work.

I still had grocery shopping and a 23km run to do.  It was still kinda chilly out so I opted to hit the grocery store first.  I think I set a P.B for the fastest grocery shop ever.  I really wanted to get out and run.  I got home, unpacked everything as quickly as possible and changed into my running clothes.  I was out the door by 1:00 pm, which is way later than I'd normally do a long run, but, it was way earlier than I thought I'd be.  It was still kinda chilly out but the sun was warm so I opted for a tank top and shorts.  It was downright nipply those first 3-4km before I warmed up.  Brrr.  I started off feeling a little rough.  I think Thursday's mile repeats were still hanging around in my legs as was the ride from the day before.  Somewhere around the 4km mark, all the aches started to go away.  My hamstrings felt a little tight but it was manageable.  I glanced down at my Garmin amazed to see my heart rate hovering in the low 140's and my pace at 4:30's - 4:35's.  It felt easy.  It felt like that for my entire run.  I kept thinking I'd hit a wall at some point.  Nope.  In fact, my heart rate dropped a bit as I went on, which is weird, I've never had that happen to me before.  My legs actually gave out before my lungs did, which is usually what happens to me, ha ha.   I ran 23km in 1:49:43 for an average pace of 4:46 km's.  My average heart rate for the run was 139 which is insanely low given that my normal long run target is between 150-152.  I was so pumped when I got home.  I couldn't believe it.  Of course I Instagrammed it right away, ha ha.  I was definitely inspired by RunEmz and all her awesomeness.  She managed to run 108.88 miles in 22 hours.  For us Canucks that works out to roughly 175km.  Yes, you read that correctly.  175km.  On a freaking treadmill.  What an inspiration. 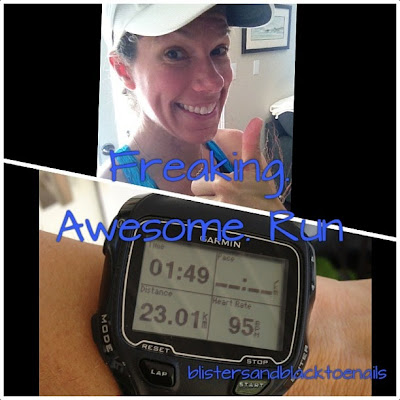 Sunday swimming has started again so Sunday morning I hit the pool.  I actually ended up getting up really early on Sunday to get on the computrainer to put some time in on the saddle before I went to the pool.  I lasted half an hour.  My legs were so tired from my run and my crotch / sit bones were still tender from the new saddle.  Ugh.   The swim was just what I needed to get the remaining soreness out of my legs though.  It wasn't too hard either, lots of drills and technique work which can be mind numbing but it's so important.  I was SO freaking hungry when I got out.  Thankfully I had the foresight to make these babies on Saturday evening. 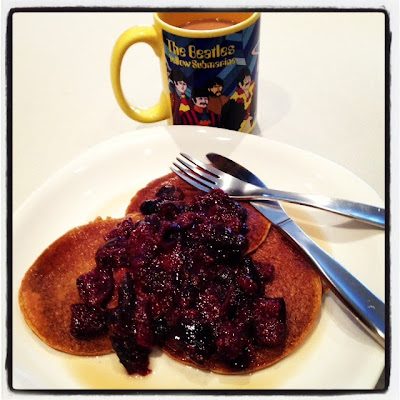 Pumpkin spice protein pancakes with stewed figs and maple syrup.  Oh.  My.  Goodness.  Seriously my most favourite post workout meal ever.  I LOVE pancakes.  After I inhaled those I spent some time figuring out the remainder of my training for Scotia.  Yes, I know it's only 5 weeks away.  You can get a lot done in 5 weeks, especially in the speed work department.  After that, the cooking bug hit me again and I went on a bit of a bender in the kitchen.  All this took me about 3 hours but I'm now pretty much set for the week.

Hmmm....guess I didn't really slow down much this past weekend, other than Friday night, ha ha.  But, I am all caught up with all the little things that have been on my to-do list for the last little while so perhaps that will allow me to slow down in the near future.  Let's hope so.

How was your weekend?   Action packed or chilled out?

Posted by Phaedra Kennedy at 4:36 PM

EMZ definitely lit a fire under me as well... you just freakin want to run after watching her, right? Leading by example and such an amazing person.

EXACTLY! I'm so envious of the face that 1) you got to meet her and 2) that you got to RUN with her!!! She really is so inspiring.

I just added Woody's to my foursquare lists for Great Burgers AND Great Beer... thanks for the recommendation!

You are most welcome!! It's my favourite place hands down. You have to wait a while for your burger but I think it's totally worth it.