With my A race looming, I figured it was time for me to get back on the running wagon....STAT.  My summer had been eaten up by work and a whole lot of triathlon racing.  My normal training routine kinda went out the window and I had a hard time making it out to my run group.  My running went from 3 days a week to 2 if I was lucky.  I was good about getting my long runs in, it was just my mid week tempo and speed work that took a back seat.  Although I guess racing every other weekend counts for something, right?

I figured once tri season was over, I'd go out and test my legs with a 10km to see how I fared.  Depending on my time and how I felt, I'd have a rough idea as to how much work I'd need to do over the next 6 weeks.  Now, obviously so many things can affect your time and your time isn't always indicative of what you'd be capable of off a successful taper etc etc.  I went into this race with ridiculously sore and tight hamstrings.  So much so that I was a bit worried I'd hurt myself if I pushed too hard.  I also didn't really take it easy the day before;  3 hours of standing / dancing around on a tile floor in the kitchen never does my legs any favours.   It's not like I ever really take it easy the day before a race anyway, ha ha.  Ok, maybe the day before a marathon.

I figured a smaller race would be good, not too many people to contend with etc and the timing of it was perfect.  It was also only $15.  You can't beat that...although you do get what you pay for.  This was a total no frills race.  A couple of tents for registration and kit pick up, no t-shirt (which I appreciate) however you did get a heavy duty M.E.C drawstring bag.  Races seem to be really into giving these things out nowadays.  I have an abundance of them kicking around the house.  There was one tiny corral that everyone lined up in and these odd carpet like timing chip mats.  The timing chips themselves were like small credit cards that you attached to your shoe with twist ties.  Twist ties!!  I had a pic but for some reason I deleted it off my phone, d'oh. 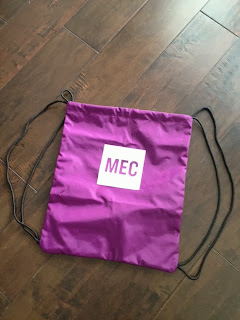 The race was located in Tommy Thompson Park down on the Leslie Spit.  I probably should have taken that into consideration when I registered.  The spit is notoriously windy.  It's also quite rough in some places so you have to watch your footing.  Kinda hard when you're hauling ass.  The race organizers did warn us about a few potholes with water in them (it had poured rain the day before) so we knew to watch for them.  There was also a 5km and a half marathon.   The half marathon went out 15 minutes before the 10km and then the 5km went out 15 minutes after the 10km.  So there was always people on the course.  There were only about 300 participants in total so it's not like the course was ever going to be really crowded.

I had a 21km run slated that day so my plan was to go out and do a 6-7km warm up, race and then do a proper cool down.   I picked up my kit, dropped it off in the car and headed out for my warm up.  My legs felt absolutely horrible.  They were sore and heavy and my hamstrings felt like tightly wound guitar strings.   I hoped that 6km would be enough to sort it out.  I plodded along at a very easy pace and enjoyed the morning.  It had started off a bit cool but as the sun came it, the temperature had started to rise quickly.  When I got back to the car, I stripped down to my shorts and singlet and went off again for another km.  I ran back to the car again, checked the time and decided to make my way to the start.  I had 15 minutes to spare so I spent it doing a dynamic warm up.  Before I knew it, it was GO time.

I got into the starting corral and lined up behind the first row of people.  I wasn't sure what the competition was like.  There were a couple of folks that "looked" like they were speedy but it's so hard to tell.  Normally I try to get myself up towards the front but we had lots of room to spread out so I wasn't concerned.  There were a couple of race announcements and then the guy with the loudspeaker started counting down.  3-2-1 - and GO!  No horn, no nothing.  Just yelled GO.  Classic.

With that, we were off.  Of course I started out way too fast.  I hit km one in 3:47.  Um.  What? The next km was 3:57 and the next was 3:58.  I thought there was no way I could sustain this pace.  I've never been able to hold anything that fast, especially once we got into the less sheltered area of the course.  Sure enough my next split was 4:07.  That was a little more like it.  At the 3km mark I noticed that the km markers were off.  I hoped that they would even themselves out before we hit the turnaround or else the race would probably end up being short.

Just after the 3km mark, the path started to get rough.  There were a lot of rocks and some hard packed gravel and mud areas that we ran through.  I did a lot of puddle jumping and pot hole dodging here.  Not really ideal in a race but what can you do.  It kept me light on my feet which is always a good thing.  The path eventually turns into a freshly paved bike path.  That was heavenly.  I noticed we were coming up to the turnaround.  I glanced at my watch and it was just past 4.5km.  Hmmmm.

I hit the turnaround and kept hammering.  A few minutes after I passed the turnaround, my Garmin signaled 5km.  Great.  I figured the course was going to be short, it was just a question of how much.  If it was negligible I could chalk it up to my Garmin being slightly off but I was thinking it was going to be at least 300-400m, which is a pretty big discrepancy.

I passed a few folks that were running the half marathon and I actually caught a guy that had been slightly in front of me since the start.  We went through the muddy / gravelly patch again and I caught another guy here.  I had somehow found another energy reserve.  I was feeling really strong.  Hurting like hell, but strong.  I figured at some point we'd be running either into the wind or it would be coming at us from the side.  As soon as I rounded the bend just past the 6km mark it hit me square in the face.  Did I mention that I hate the wind?  Yeah I know it makes you stronger but man, does it ever demoralize you when you're in it.  Just when you think you're motoring along, doing awesome, you look down at your watch and think WTF...I feel like I should be going so much faster.  I am pretty sure I hit my max HR for the day (194) somewhere in the last 3km of the race.
Those last 3 + km were pure hell.  That wind was so strong.  Surprisingly my pace stayed relatively consistent, albeit slower than the first 3km.  I think had my legs been 100% I might not have suffered as much.  Sure my lungs were burning but my legs, well they were positively on fire.
As I pushed my way through the wind, I kept glancing at my Garmin and looking for the kilometer markers.  There was no 8km marker and then all of a sudden there was a 9km marker.  I looked down at my Garmin and I was still at 8. something.  Seriously?

Admittedly I was happy to see that 9km marker even though it meant that the course was probably going to be short.  I was totally dying.  My brain was screaming at me to stop or at least slow down.  I ignored it.  The next thing I knew I could see the start / finish line.  I started to push the pace and caught a guy.  He glanced over at me and must have thought he didn't want to get chicked so he put the afterburners on and pulled away from me.  I had nothing so I watched him go.


I ended up second place woman overall and made the top 10 overall, which is always a nice thing.  More importantly, I have a good sense of where my abilities are at and how much fine tuning I'm going to need to do over the next few weeks.

Sub 1:30 is definitely within my grasp.

About the race...would I do this one again?  No.  Running along the spit is nice if you're out for a leisurely run with a friend.  RACING along it is not.  I'd look at doing another one of the M.E.C races at another venue though.  You do get what you pay for but it's a nice change from the insanity / intensity / crowds of some of the bigger races.  You also get 10% off anything at M.E.C with your race bib the day of the race.  Not a bad deal.

Posted by Phaedra Kennedy at 7:11 PM