Well, I hope you all had a fabulous holiday!  I certainly did.  I love this time of year, especially the time we get to spend with family & friends.  I could do without the tons of food and booze.  It seems like it's be a non stop whirlwind of booze, snacks, cookies, chocolates and generally not very good for me food.   Thank goodness to whoever it was that decided that jeans needed lycra in them, I bow to you and your genius.

As the year draws to a close, many of us runners  have started planning out our 2013 race season.   Actually I'm sure some of us started planning a few months ago (ahem).  I've got 3 confirmed races in my schedule so far and a few more that I'd like to do but haven't registered for yet.  Of course, I plan on peppering my summer with some sprint triathlons.  I'm really looking forward to that!  I hadn't planned out my fall season yet because I wasn't sure what was happening with NYCM.  After almost 7 weeks, the New York Road Runners finally made an announcement. Thankfully they came up with multiple options:

Option #2 - Guaranteed entry into the ING New York Marathon for 2013, 2014 or 2015.  Runners will be required to pay all processing and entry fees at the time of application with fees maintained at the same rate as those paid in 2012.

Option #3 - Guaranteed entry into the NYC Half 2013.  Runners will be required to pay all processing and entry fees at the time of application.

I had figured that I'd be running Boston and New York next year.  But the more I thought about it, the more I thought I'd just like to limit myself to one marathon a year.  Yes, I'd really love to run NYCM but I don't feel that option #2 is 100% fair to those of us that spent the money and showed up ready to run.  I don't want to fork out another $350US on top of the $350 I already spent.  So, I'm going to take my refund and try to re-qualify in for 2014 instead.  I double checked the qualifying standards for my age group and I'd have to run a 1:37 half.  Given my half marathon results over the last 2 years, I think it's doable.  It will give me something to aim for this fall because my race calendar needs some filling in, in the second half of the year.

I have a few friends that are trying to talk me in to doing a half Ironman this year.  Two of my friends have registered for Muskoka 70.3.  I registered for it the first year they held it but was unable to do it as I hadn't quite recovered from my first laparoscopy.   I have ridden the course numerous times so I'm very familiar with the bike part of it.  I'm not going to lie, I'm tempted.  It's a big time commitment though and I'm not sure I'm up to it.  I'll re-evaluate after Boston.  Right now, that's the main goal.

Speaking of which, training for that has started already.  Christmas Eve morning I was out at the local track doing my first workout.   Nothing like kicking off your training plan with a 3x1600m track workout.  It was tough but I got it done and I hit or exceeded my goal pace of 6:22 per 1600.   I had to lie down for about half an hour when I got home but it felt good to be out there pushing the pace again.  Yesterday morning I headed out for a 10km run with 4 of it at a tempo pace of 4:17/km's.   I didn't quite manage the 4:17's, probably due to the food hangover I had from Christmas day but I wasn't too far off.  It's put me in a good head space for the upcoming year and sometimes, that's half the battle. 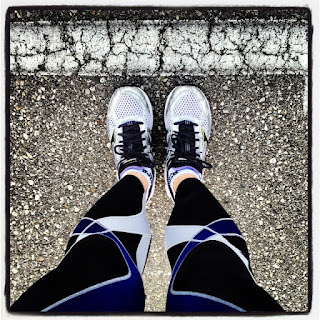 When did you start putting your 2013 race schedule together?  I started in September, ha ha.

What races are you doing next year?


Posted by Phaedra Kennedy at 8:53 AM

I'm still working on my race schedule! I have for sure the WDW marathon in 3 weeks and the Nike Womens Half in DC in April -- those are the only ones I have already registered for. I have a bunch more I want to do, but trying to figure out what will work and what will not! Love following your journey :)

Woohooo! A marathon in 3 weeks? Seems so strange to think of that given that we have 20cm of snow on the ground here, haha. Best of luck with your 2013 racing plans! Thanks for following along. :)

Sounds like you made the right call. I'm glad you finally got some options for NYCM. I am really envious of your pace! One marathon in a year is all I can handle the thought of - I'm impressed you even considered both. I'm cheering for you, and I can't wait to see you blow Boston out of the water.

I think so. I figured it would take them a while to figure out what to offer people, I'm really glad they came up with as many options as they did! Mentally I think I could probably handle 2 marathons a year but my body says otherwise, ha ha. I've got score to settle at Boston so here's to not imploding like I did last time! :)