2011 was a banner year for me all around so while I had high hopes for 2012, realistically I figured there was no way it could top 2011.  Especially in terms of my racing season.   The first half of 2012 was amazing no doubt.  The second half was a little underwhelming for me in terms of racing but looking back on it now, I'm ok with that.  I was busy working on other things.  Things that needed tending to.  From an racing standpoint, 2012 wasn't as action packed as 2011 (14 races last year vs 9 races this year) but this year, there was so much more to my year than just racing.   Last year I experienced a transformation on the outside.  This year I worked on transforming the inside.  More on that later, let's focus on the racing for now...this is a blog about running after all.

I opted to tackle the marathon in hopes of getting another B.Q.  Doing a marathon this year was part of my master plan from last year.  I raced 3 half marathons and a bunch of other smaller races in 2011 to try and work at building up my speed.  I lost a bunch of weight along the way and gained a whole lot of speed in the process.  I started off my race season at the beginning of March at the Chilly Half Marathon, the day after my birthday.  I went into the race with zero expectations of myself and ended up beating my previous half marathon P.B. by almost 3 minutes and winning my AG by almost 5 minutes to boot.
Happy Birthday to Me!  Take that 41!
3 weeks after the Chilly Half, I ran Around the Bay 30km.  My goal at this race was to get a silver medal (sub 2:30).  The closest I had ever come to that was a 2:38.  Not only did I get my silver medal but I set another PB by just over 20 minutes.  I just missed getting a gold medal (sub 2:15) by 2 minutes.  Next year, I'm gunning for 2:14:59.  This was probably the best race I ran this year.  I paced myself smartly and managed to negative split it.  I can't remember the last time I negative split a race.
Next up, a whole 12 days later, was the Good Friday 10 Miler.  Another PB for me by 9 minutes and 2nd place in my AG.  A much more competitive field this year too so I was pretty happy about the second place. 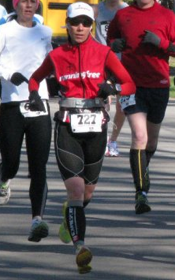 The beginning of May was my "A" race - the Mississauga Marathon.  I had hoped to break 3:20.  An aggressive goal for sure but one that I was confident I could manage if I was smart.  It was a tough race and I wasn't properly dressed but I managed to pull off a 3:18 and land on the podium again as the 3rd place female masters finisher.  Say what?
Next up, just 3 weeks after Mississauga, was the Toronto Women's Half.  I had no clue how my legs would feel.  I hoped that I had recovered enough from the marathon to run a good race.  Sure enough, I pulled off a course PB of 1:32:09 and won my AG.  An amazing improvement on 2011's 5th place in my AG and a 1:41:52.
After this I decided I wanted to race a 5km.  So in June I ran Run the Runway 5km.  It was flat but super windy.  I ended up being the overall women's winner with a time of 20:17.  So darn close to sub 20.  If it wasn't so windy, it could have done it.  Ah well.   No pics of this as G didn't come, but I did get a pretty cool medal. 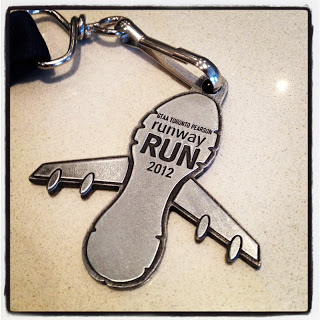 The rest of June & July I focused on getting back on my bike. August was going to be a big month of racing.  I registered for 3 races in a row:  the Toronto 10 Miler, Bala Falls Triathlon and the Toronto Island Triathlon.  Then at the end of July, I tweaked my calf.  Running went out the window.  I missed the Toronto 10 Miler and Bala Falls but I managed to do the Toronto Island Tri.  I pulled off a 4th place AG finish.  Given the fact that I had just come back after almost 3 weeks off, I was pretty pleased. 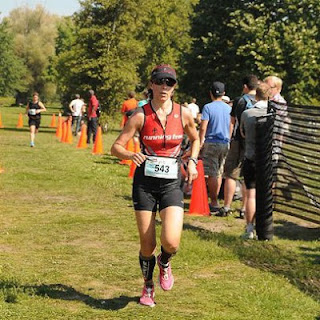 By September I was right into my training for NYC.  I still managed to sneak another race in there though.  In late September, I ran the Oakville Half Marathon.  No PB here but I did manage to snag the overall Masters Female win.  Wheee.  No pics cause G ran it with me!

October brought the Scotiabank Half Marathon on a very soggy Sunday.  My plan was to run 12km to the start and then do the race so I could get my last 20 miler done before NYC.  I wasn't sure how that would go as I was dealing with achilles issues.  I gutted out a 1:34:16,  which was 30 seconds faster than last year and I had a ton of fun.
November rolled around and I was pumped for NYCM but alas, it was not to be.  My running took a bit of a back seat after NYC.   Probably due to the fact that we were going to be traveling.  Which brings me to my next category.....

If you had said to me at the beginning of the year that I was going to take 4 trips this year, I would have said you were nuts, especially since we just finished rebuilding our house in December of last year.  Never in a million years did I think we'd travel as much as we did this year.  I knew we were going to be going to Jamaica (friends wedding) and NYC but I figured that was it.  Somehow we managed to squeeze a trip to San Francisco to visit friends (yay for RBC Avion miles!) about a month after coming back from Jamaica and a trip to Paris just 3 weeks after going to New York.  Ok so the Paris trip was a business trip for G but I was lucky enough to tag along.  I got to run in 4 different places this year.  Amazing.  There are no words for how lucky I feel.  Except maybe THANK YOU UNIVERSE.   I know I wouldn't have made it through some of these trips if it wasn't for the work I did on myself.  Cue the next category.

Last year, I think all the success I was having with my racing helped bottle up what I was really running away from.  Between 2009 and 2010 G and I tried in vain to start a family.  3 rounds of failed IVF treatments resulted in a great deal of heartache.  I initially channeled that heartache into taking control of my body once again.  I did that with resounding success in 2011.  Emotionally though, I never really dealt with all the things I was feeling.  Running helped quell those emotions but not deal with them. Those feelings started manifesting as various anxieties or even worse, amplifying existing anxieties like my fear of flying.  After having a panic attack of epic proportions on a flight to the Dominican in 2010, I decided it was high time I did something about it other than have to take atavan every time I got on a plane.  Mid-summer I started seeing a Cognitive Behavioural Therapist.  She helped me work through the anxieties and things I was feeling and I can confidently say that I can now fly without taking anything.  I made it to Paris and back without any issues.  All the little things that I used to be anxious about don't bother me any more.  Getting this dealt with was the best possible thing to come out of 2012.  I feel like I can live my life fully now with little or no trepidation.  I'm still working through a lot of the emotional fallout but the anxiety has gone.  I think the Universe had to physically slow me down first in order for me to deal with this, thus my calf and achilles injuries cropping up almost back to back.  At least that's my theory.

Most importantly, I wouldn't have been able to do any of this without the love and support of my amazing G.  He is my lover, my best friend, my sole mate and my number one fan and I can't imagine my life without him in it.

Happy New Year to all my readers.  I can't thank you enough for stopping by and taking the time to read my random thoughts and ramblings.  I wish you a year filled with health, happiness and many many miles.

Thanks Lovely!! Happy New Year to you too! Hope your 2013 is spectacular!

Big hugs right back! That's an incredibly honest post. And it sounds like 2012 was a really mixed bag - with plenty of success along the way, in true you style! Here's to 2013, and may it hold even more wonderfulness for you (no, I don't care that wonderfulness isn't really a word)

Awww, thank Kate. :D It was a mixed bag on some levels but I wouldn't have changed any of it. Here's to a kick ass 2013 for both of us!