I had drafted my usual Thinking Out Loud post and was going to publish it this morning after my workouts.  But after the events of this morning, all the things I was thinking about seem so trivial.

I had a brick workout scheduled this morning so I had to do a hard ride followed by a hard run.  G usually goes and rides with a local bike club - Morning Glory - so he went off to do that.  I got back from my run shortly after 7:00 and started stretching.  As an afterthought, I grabbed my phone so I could text G to see if he could pick up some cream on his way back from the ride.  I then saw that I had 2 missed phone calls, a voicemail and a text from a number that I didn't recognize.  I could feel a lump forming in my throat.

I called into my voicemail only to hear the voice of my friend Michael telling me that G had crashed his bike.  I held my breath.  Apparently he was conscious even though he had hit his head.  The bad part was his shoulder.  They had called the ambulance because he was in so much pain.  I called Michael back right away and he assured me that G seemed to be fine that it was just his shoulder and maybe some broken ribs.  He said he'd call me when the ambulance got there.

I ran around the house grabbing clean clothes for G & inhaled my breakfast.  I was just about to get in the shower when  Michael called me back and said the ambulance had arrived and that they were stabilizing him and taking him to St. Joe's.  The paramedics suspected it was either a broken or dislocated shoulder / collarbone.  Not an ideal situation.

I got myself showered and dressed and G texted me to say he was at the hospital and that they were taking him in for an x-ray.  I made my way through rush hour traffic to the hospital and walked into Emergency to see G sitting there with his arm in a sling, his cycling jersey pulled open, a bit of road rash on his legs, a few bloody knuckles and a glazed look in his eyes.  They had given him 2 percasets and a gravol.  He was just waiting for the x-ray results but looking at his shoulder, there was a huge bump on it.  And it was sitting lower than his other shoulder.  I was amazed that he hadn't shredded his jersey.  I asked him what happened.

He was riding with a pack of guys along Lakeshore West but the Boulevard Club.  They were literally about 5-10 minutes away from finishing the ride.  By the Boulevard Club there are three concrete posts that go across the bike path.  Why they're there is BEYOND me.  But they are painted bright yellow and they are a decent height so they are easy to see.  However, there was a fourth, smaller post that the rider in front of G didn't see until the last minute.  He swerved but G had riders on either side of him and couldn't go anywhere so he hit the post full on, went over his handle bars and landed on his shoulder.  Then his head hit the ground.

I cannot even begin to tell you how bad this *could* have been.   Thankfully, he landed on his shoulder.

The doctor called him back in to go over the x-rays and said that he had a separated shoulder.  He said if you were going to have any shoulder issue, that was the better thing to have apparently (instead of a broken collarbone or dislocated shoulder).  He said that G could continue to work out but that he'd have to let the pain dictate what was possible and what wasn't.  He also said it was important for him to move the joint around so that scar tissue doesn't build up and interfere with future mobility.  He did suggest that he to to the Fracture Clinic at St. Joe's and speak to a surgeon there to see if they thought surgery might be necessary.  The separation was fairly wide so it *could* be something that is required.  The wait at the Fracture clinic was insane so G is going to go back first thing tomorrow morning.

Of course this does not bode well for our race in Europe.  He's definitely not racing next weekend.  The doctor did say that G should continue to try to workout and to let the pain dictate what he can and cannot do.  Given the amount of pain he's in now, I don't think he'll be doing much for the next couple of weeks.  So his European race is up in the air.  I've been on the fence about it since Boston and now this has pushed me closer to the "I don't want to do it" line.  I signed up for it because we were going to do it together.  Triathlon is what we do together.  I wouldn't seem right to toe the line without him.

I clearly have a lot to think about but right now I'm just thankful that it wasn't more serious.  I'm thankful for the amazing people at Morning Glory Cycling Club as well as my pal Michael who stayed with him till the ambulance came and then he took his bike & checked it over.  The awesome folks at Morning Glory even sent G a get well cookie.  Little do they know that most of that will end up in my belly. 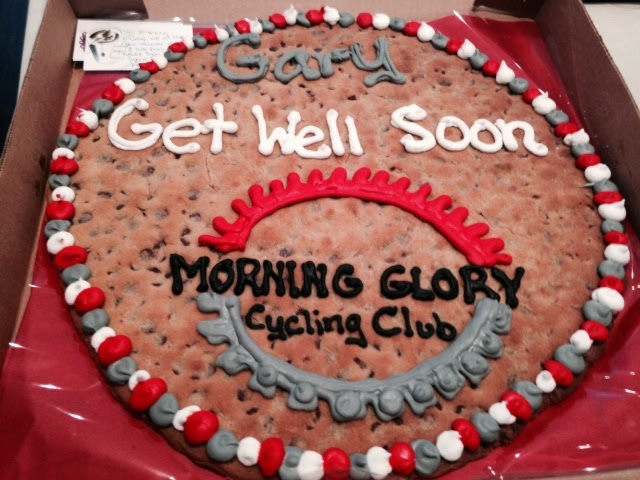 Posted by Phaedra Kennedy at 4:10 PM

Email ThisBlogThis!Share to TwitterShare to FacebookShare to Pinterest
Labels: Thinking Out Loud

I'm SO glad it wasn't worse! That is a very scary situation! He will definitely be in my prayers for a speedy recovery. Giant cookies are definitely the best "get well soon" food :)

It's amazing what things in life make us truly appreciate how fragile life can be. So happy he's mostly okay. Sending good thoughts for a quick and easy recovery. As much as I know you love triathlon, his wellbeing is more important, so whatever you decide about Luxembourg, don't feel too bad about it. There will always be more triathlons to run.

Oh my! Thank goodness he is okay!!! I can't imagine how you felt getting those calls! All the best for a quick and easy recovery. I wouldn't worry about the race either - go on the trip and be thankful to have each other!

That is seriously scary. Glad to hear he is OK and in good spirits. I haven't taken a bad spill on my bike as of yet, but have definitely had some close calls. That's great that he had people around to help out and be there for him (and send him a giant cookie!). I totally understand your predicament with whether or not to do the race without him. I would feel the same way if my husband or someone I had been training with had a similar incidence.

I am very sorry to learn of the unfortunate events of this week Phaedra. Sending much love and thoughts from across the pond. How is G now? Well on the road to recovery hopefully!
How very thoughtful of the cycling club to send (you) (via G) a decorated cookie. :)
Sounds like you had a marvelous response from the medics and hospital staff which is helpful.
No doubt a difficult week for you both and the trip to Europe now understandably uncertain. Hope that all goes well for you both in the next few weeks and that all turns out for good.
Take Care

OH NO poor G!!!! I am not going to lie cycling in the city definitely scares the heck out of me. I am so happy he is okay!