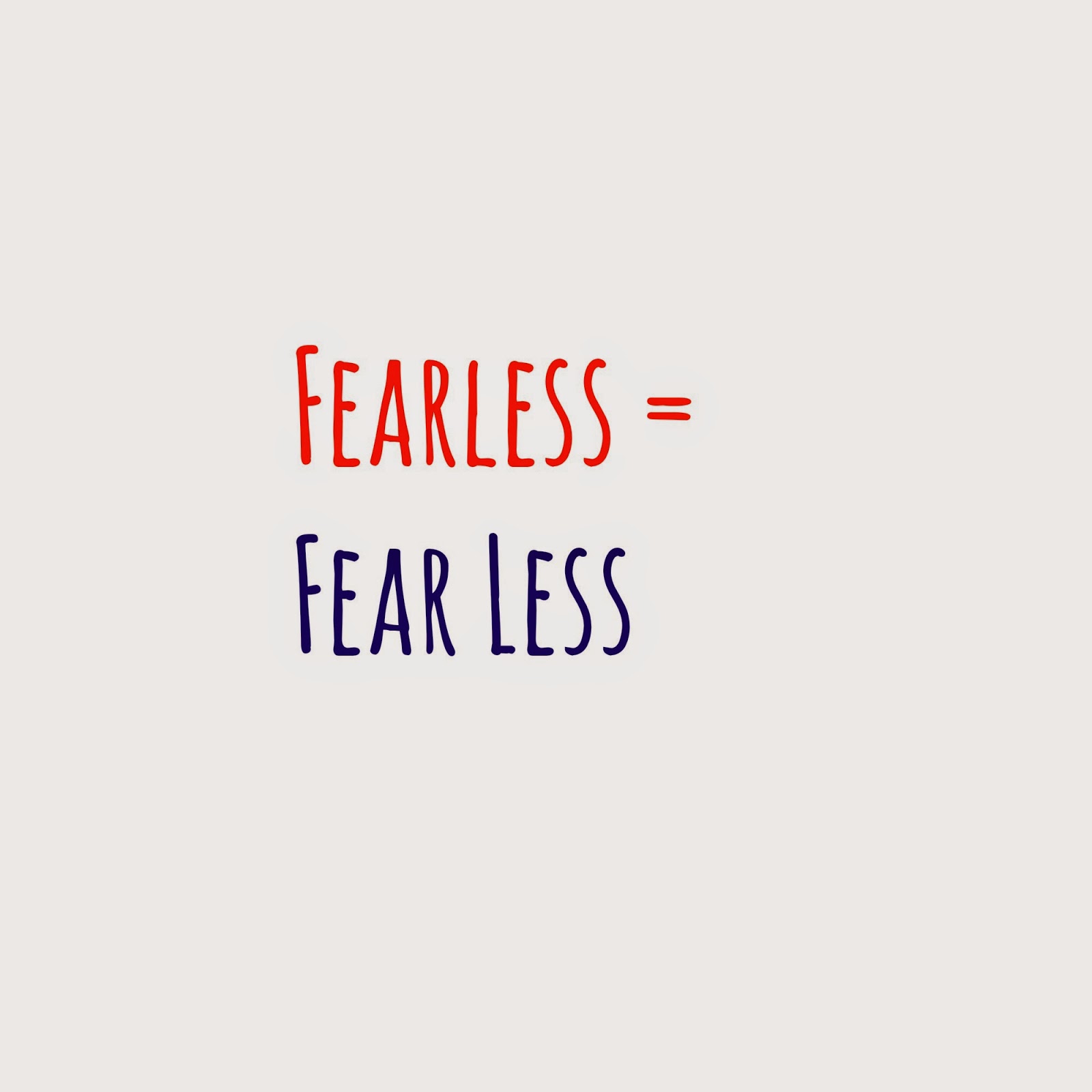 I've been tossing the double entendre of this word around in my head for a while.  Probably since my friend Jonathan claimed it as his "words to live by" at the beginning of the year.  The profundity of it struck a chord in me. It seems so simple, so easy.   But it's not.  At least not for me.

The person you see in these pages is generally the person I am in real life.  Yes, I worry and obsess about things that are beyond my control (just ask G) but I've gotten a LOT better in terms of rolling with the punches as of late.  I'm not afraid of a hard work and I'm always happy to do it (despite my occasional grumbling).  Nothing much phases me in that department.  With the exception of one thing.

I thought that I dealt with this demon back in 2012.   I suppose I did because for a while I was totally fine with OWS.  Last year, old fears began to resurface and I suffered a few panic attacks while swimming.  Not full blown ones but close enough.

It's frustrating because I thought I had trained my mind to deal with it.  Now when I think about swimming 2km in open water, my heart starts to race, my palms get sweaty and I feel anxious and filled with dread.  There are several factors that feed my fear.  Get ready because a few of them are pretty freaking ridiculous.  I'm pretty sure I think too much.

1.  How do I occupy my mind for that long in an unnatural setting?  By unnatural, I mean that as humans, we are out of our natural habitat when we're in the water.  When I'm on my own two feet, I have no problem tuning out.  Put me in the open water and I can't quiet my mind.  I keep thinking about how much I want to be done...and it's not like I can just start walking.  No.  I HAVE to swim if I want to get anywhere.  Or I stop and have a lifeguard bail me out and I call it a day.  That thought has crossed my mind MANY times (I did say that I think too much).

2.  I have a deep seeded fear that all of a sudden I won't be able to swim anymore or I'm going to get too tired that I won't be able to finish the swim.  So incredibly illogical and the biggest crock of shit ever but that's where my mind goes.

3.  And then there's The Panic.   The Panic ensues from a myriad of things:  cold water, labored breathing, water up my nose, realizing how far I have to go, someone swimming into me, you name it.  When it starts, it's like every fiber of my being is screaming STOP STOP STOP.   It's almost paralyzing.  I am assuming it comes from already being anxious, so add some discomfort to the mix and it's like a molotov cocktail.

4.  There's always that fear of touching something or seeing something in the water.  That scene from Jaws with Richard Dreyfuss when he is diving by the boat and pulls out a sharks tooth only to dislodge the head of the boat owner.....yeah, that's the stuff of nightmares and it's something that's always in the back of my mind.  Never mind that 99.9% of my swims are in LAKES.

Clearly I have an incredibly overactive imagination.

How do I deal with all of this?  I know that practice helps immensely.  The more opportunity I have to swim in open water, the more comfortable I feel in it.  I'm usually pretty good by the end of the triathlon season, ha ha.   And by pretty good I mean that I might still panic a bit but I'm usually able to keep moving vs having to stop and roll over on my back to catch my breath and try to calm down.

I think what really needs to happen is that I need to learn to love the open water.  To not be so afraid of it any more.  There needs to be a healthy respect for it but fear should not be part of the equation any longer.


Making the decision is easier said than done.  I feel like I can decide that but I don't feel like I have the right tools to enforce that decision when the fear starts.  THAT'S where I'm struggling.  I'm worried because I don't have a lot of time between now and my 70.3 to actually get into the water and practice.  I'm also scheduled to race this Sunday.  It's the first tri of the season and really, the last thing I want is for my first open water swim of the season to be in a race situation.   The C3 Quarry is supposed to open this weekend so I'm hoping that I can get up there for a practice swim tomorrow.

Mike has been a huge help in talking me through things this past week.  I feel pretty darn lucky to have two great people in my corner this year.  Ming gives me the work and Mike gives me support.  He even offered to be my swim buddy at my race this weekend!  I figure I'll be able to make it through 750m ok.  It may be slower than I want it to be but that's fine.  Either way, he's going to be there because he signed up to race it as well.  And of course G will be there cheering me on.

Now, if I can only figure out how to turn those thoughts OFF between now and Sunday, all will be peachy.

Does anyone else struggle with similar issues in the swim?  If so, how do you deal with them?

Posted by Phaedra Kennedy at 1:45 PM

I honestly, 100% believe, that you wrote this post for me. I get to the point where I almost throw up even thinking about the open water swim leg in triathlon. I am fine swimming in open water on my own, but the idea of hundreds of other people splashing and kicking around me makes me ill. If you have any pointers for a newbie (Boise will be my first) I would love to hear them.

Kristen,I have struggled with this on and off for pretty much my entire triathlon career (10 years!) I've done some races where I've let EVERYONE go and I've stood there waiting for what seems like an eternity, but was probably only about 30-45s, and then I've started swimming. I'm an alright swimmer so I usually end up catching people but at least I'm not in the melee at the start. Makes for a less stressful experience.

I might do that, especially for my first. I definitely don't want to get caught up in so much chaos that I panic and hate the experience. What's a few seconds, right?

Open water swimming is no joke! For me, I'm not afraid of open water swimming, at all, unless I'm in a race, then I panic. I am extremely comfortable swimming in open water and I love being in lakes and ponds. I think growing up spending weekends on a lake helped with this! What upsets me the most is, I have so much confidence when I practice open water swims and I have no fear.. then I get to race morning and my heart rate goes through the roof and I panic. I have been in races where i have to stop and tread water because I literally can't breathe! I found that getting a song stuck in my head and repeating it over and over again helps to relax me! You should try it, it might work for you too... anything to take your mind off the fear.

Kristen - that's kind of my situation as well. I'm somewhat OK in open water when it's NOT a race. But when it's a race, forget it. Funny you mention the trick about the song. I've done that a couple of times with success. This past weekend at my sprint race I had The Eurythmics "Sisters are Doin It for Themselves" going through my head, ha ha. Seemed to do the trick. :)