It had to happen sooner or later.  I'm actually amazed that it took so long, although I think the events of this week had a lot to do with it.  Yes folks, I finally had my first training meltdown.  I usually have at least one of these per training cycle and it usually happens during a huge block of training.  Which has been the case for me over the last couple of weeks.  Coupled with what happened to G the other day, and the high crap factor of yesterday's ride and well, everything just seemed to be a bit too much for me.  I haven't been feeling very confident as of late.  I feel like the decision to do a 70.3 only 8 weeks after a marathon was maybe not the greatest idea.  I feel like I haven't had adequate time to prepare the way I would have liked to (lots of open water swimming, long rides followed by long runs).  I also feel like I've lost a lot of strength.  That seems to be the kicker for me.  I felt it yesterday on the climbs and in the wind and I can physically see it in the way my body looks.  I'm no longer the super lean athlete I was last year.  My body has changed.  I'm carrying more weight around my midsection and thighs than I have in the last 2 years.  I can only chalk that up to not lifting like I used to.  I'm also carrying 4 extra lbs that I somehow managed to put on after Boston and that I haven't been able to shake.  I know 4lbs doesn't sound like a lot but when you're already slim, 4lbs makes a difference in everything.  It can slow you down.  I feel and perform my best when I'm in the low 120's.  I'm hovering around 125-126lbs right now.  Anyway, all of this came to a head yesterday and after my ride, I sat on the couch and cried.

I touched on some of this with Mike yesterday (another coach & owner of Real Deal racing).  He gave me a pretty good pep talk.  Ming has also reassured me that things will turn around.  I am full of mixed emotions right now.  I'm questioning my reasons for racing as well as my desire to do so.  I was miserable on the bike yesterday.  If it wasn't for my friend David, I think I would have thrown in the towel.  Since G can no longer ride, I have also lost my main training partner for my long rides which sucks.  To top it off, my friend Heather and I went into the water yesterday and it was positively FRIGID.  I'm not sure how much open water swim practice I'm going to get before I get to Luxembourg.  Pretty much all the open water in Ontario is colder than normal.  My first triathlon of the season is next weekend and I can't even fathom getting into the water and actually swimming.

But...things could be worse....every time I look at G with his arm in a sling, I am reminded of that.

Now that I've gotten that off my chest, let's look at the week that I had.  It was a high volume week but some workouts were shortened due to lack of time on my part + due to water conditions.  As usual, I'm linking up with the Bestfoot ladies to recap my week of training. 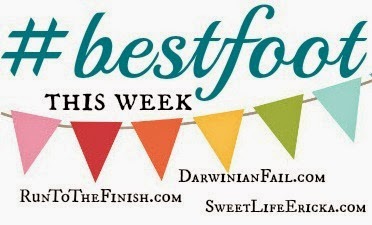 Monday:  2000m swim followed by a 50 minute bike with intervals

Tuesday:  10 km run.  Was supposed to be 12-15km but I got stuck at work late and got to run club just before they started.

Thursday:  35 minute hard bike (probably should have done a longer warm up) followed by a 7+km run with 1km repeats.  Holy tough.

Sunday:  A amazing 20km run followed by a 30 minute weight workout and then a 10 minute dip in the lake. 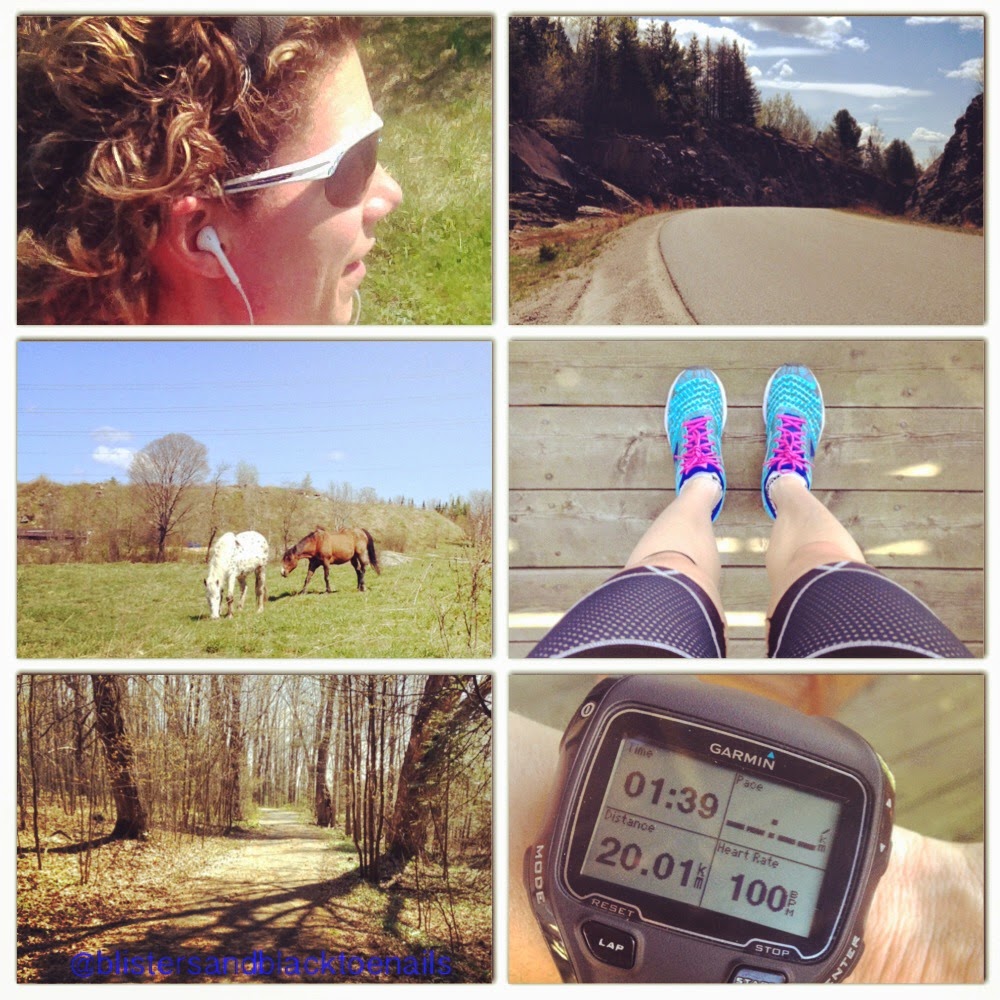 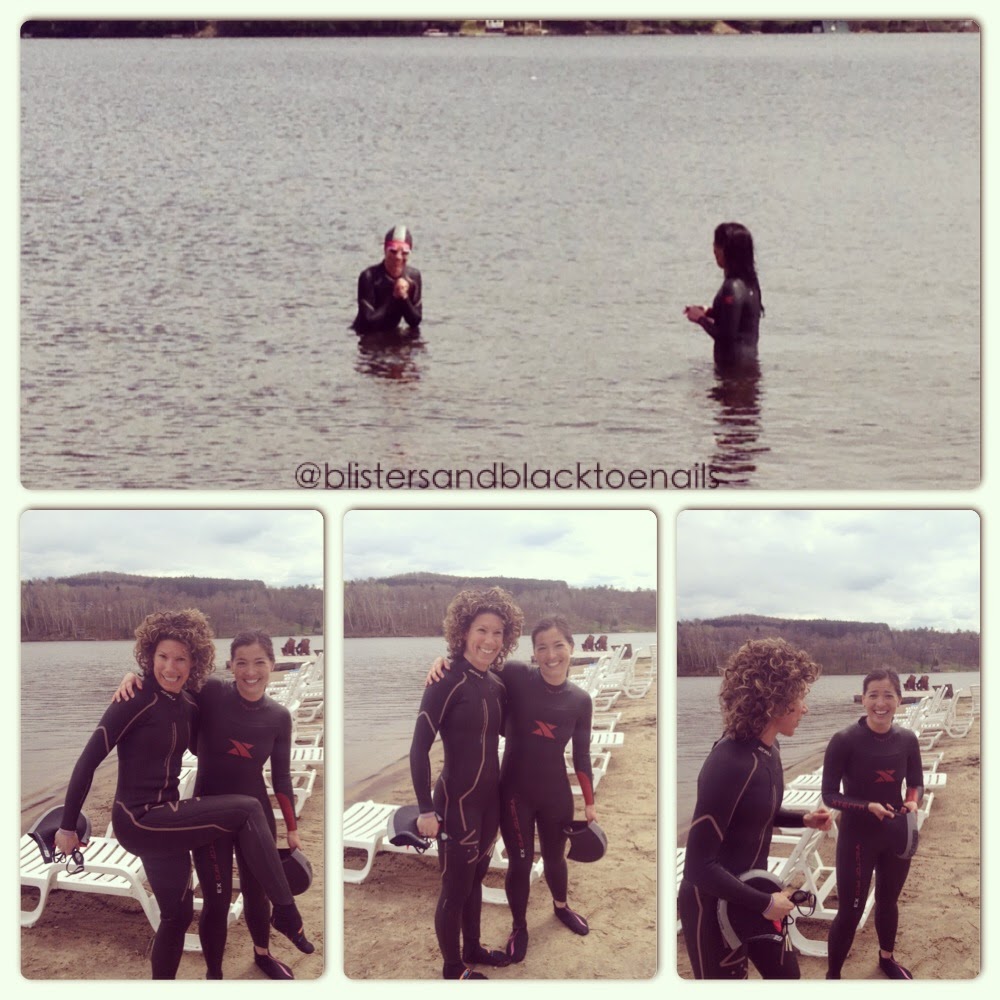 Thankfully this is a low volume week so I should have some good recovery time built in to my program.   I had a really hard workout today so I've asked Ming to give me tomorrow off.  Fingers crossed he does.

How was your week of training?
Posted by Phaedra Kennedy at 11:46 AM

Oh training meltdowns. I definitely had one all last week. You'll muscle through, I'm sure of it!

My training week was weird but good. Very unusual, but I feel good coming off it. I still feel like I need to be doing a lot more though. Never enough I suppose.

It's always nice to hear that others question what the heck they are doing and experience meltdowns as well. I've had a couple while training for 70.3 Boise. It's amazing how our emotions and mentality literally ride a roller coaster throughout the process of training for one event.

There is actually something quite unique and beautiful about it, because it means that there IS passion and importance in what you are doing. If it weren’t meaningful, it wouldn't create those feelings. Embrace them and know they are part of the process - as I am still learning this myself. You’ve got this. You are strong!

At least you got that meltdown out of the way!

ummmm I plan to have at least 3 meltdowns before my 70.3. I think it is normal. You get worn out and stressed about your expectations, and you start to panic/ overthink things.

1. You are training goddess and if anyone is going to crush their 70.3 it is you

2. I am cheering for you from Canada!!

Thanks for sharing your meltdown, it really makes me feel like I know more what to expect as I embark on my big year of training. You are really going to do amazing. You have to have the low points to have the highs, right?

oh man, i've been there. But what doesnt kill you makes you stronger, right?

oh man, i've been there. But what doesnt kill you makes you stronger, right?

Thanks for all your kind words everyone! Kristen, your words made my cry. You hit the nail on the head for sure. Sometimes I think I care TOO much, ha ha.

Good grief Phaedra, it's no wonder that you sat down and cried - you're being too hard on yourself!
You are an inspiration for many of us and your dedication to sport is proven in your success.
Enjoy the high times and the low times for the two wouldn't exist without one another.
Respect ...