The Longest 3 Minutes of My Life: The Mingate Algorithm

First off, I want to thank you all for your support & comments on my Boston race report.  That's what I love about the running community - we "get" each other and we all support each other.  You guys rock.

Now that Boston is done, Coach Ming has said he's shifting my focus from the run to the bike & swim.  We have 7 weeks to get me primed and ready to go.  I've been training in both disciplines throughout my Boston training, I just wasn't pushing myself in either of them.  I was in maintenance mode.  Subsequently, I started slowing down in the pool, which I wasn't happy about but I know that will come back once I start pushing myself again.  As for the bike, I've actually shown improvement which is generally what should happen when you actually log the time in the saddle.  I didn't do any of that last winter and if I did, it was sporadic at best.  This year, I rode 3 times a week during my Boston training.  About 80% of the rides were just recovery rides but sometimes he had me doing power work.  That consistency in the saddle has paid off.

Tuesday night I went down to U of T to the infamous "Pain Cave" because Ming wanted to do another test.  Of course I was apprehensive, but I was also curious.  He said it would be less than an hour including warm up and cool down.  Ok then.  I was chatting with one of my colleagues at the studio that was a part of Mings PhD study and he just smirked when I told him what I was doing.  He asked if I knew what test I'd be doing.  I said I had no idea.  He warned me to be prepared for a world of hurt.  Awesome.

I met Ming at the U of T Athletic Centre and he proceeded to take me through a labyrinth of hallways, down some stairs and into the underbelly of the building.  I wish I took a video because I felt like I was literally being led into the dungeon.  We walked past what looked like heating units and plumbing, all of which was enclosed in cages.  We rounded a corner to a hallway with a series of offices.  Ming opened the door to one of them and I had my first introduction to the pain cave.

It was a large-ish room with a couple of offices a large table and some chairs and a whole bunch of exercise equipment.  There was a treadmill and a couple of interesting looking stationary bikes. Ming had me get on one of the bikes and start pedaling.  I've never been on a bike like this.  The minute you applied pressure to the pedals, it increased the resistance so it made it harder to pedal.  He dialed in a cadence (95 rpm) so that's what I had to maintain, which was fairly easy for me as that is about where I'm at when I'm on the trainer.  There was a table in front of me that had a computer screen on it with a graph.  The graph was tracking my power so it was kind of neat to watch it.  He had me do a good warm up with some 5s max sprints that showed up as spikes on the screen.  After I was warmed up, he explained that we were testing for Critical Power, which is also known as Functional Threshold Power.  I tested for this back in December except that this test was a 20 minute test.  Mings PhD thesis was centered on developing a shorter more accurate way to test for this.  So, I knew that my suffering would be shorter than 20 minutes at the very least.

Ming explained that I had to ride all out, as hard as possible until he said stop.  I didn't ask for how long as I figured he probably wouldn't tell me.  I had put my heart rate monitor on but he didn't want me see it so I had to put the watch on the table in front of me.  He then proceeded to remove the computer screen that was in front of me and he also turned the other screen he had away from me so I couldn't see it.  I had NO visual distractions, no music, no nothing.  I think he does this so you really have to go within yourself and focus on nothing but the pain so you can work through it.  As he started his countdown, my palms started to get sweaty and my heart rate spiked.  I said to him that I figured my heart rate was high and he looked at it and started laughing.  I was clearly nervous about what was to come.

As soon as he said GO, I mashed the pedals.  Normally I will focus on something but I had nothing to focus on other than the black table in front of me.  I looked at that for a bit and then just closed my eyes.  Ming started encouraging me.  I concentrated on pushing those pedals as hard as I could.  The lactic acid started to build up fairly quickly.  My breathing became ragged and soon I was gasping air.  I was also hunched over with my head down.  That seemed like the most comfortable way to be when I was exerting myself to the extent that I was.  The encouragement kept coming and all I could think was "when will this be over?"  I couldn't even ask the question -nothing else was able to come out of my mouth except gulps for air.  But, I kept mashing, even though ever fiber in my body wanted me to stop.  I focused on not letting up or backing off but trying to push through the hurt.  I can do this on the run but I haven't quite experienced what it's like to do on the bike.  Until now.  It felt like forever but Ming finally started to count down.  I could taste blood that's how hard I was working.  As soon as he said stop, I sat up and let up on the pedals.  I knew I had to let my legs spin out for a bit after that kind of effort.  I did that for a bit but was thirsty so I got off the bike to get some water.  Oh my God, my legs were like jello.  I asked him how long that was and he said 3 minutes.  My response?  "That was the longest 3 minutes of my life".

Yesterday Ming gave me the data from my test as well as "a picture of what my legs drew on the screen".  This what he said:

- The CP value is 30w higher than when we tested you in Dec, so that's a really good sign when we haven't focused on cycling yet and the supplementary bike workouts are helping
- so with your new and improved CP,  that means the training zones are different now.
- the "toughness" score (ie. the variance on the points along the line) is very good, that means you "know" how to push yourself! 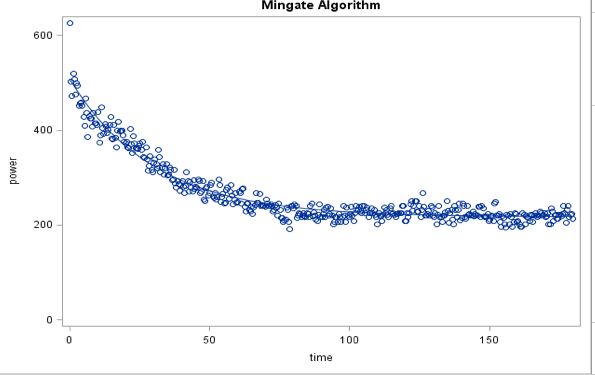 This is all Greek to me so I asked him what these numbers mean.  Apparently I have good Critical Power but I have to work on developing my anaerobic capacity, which, according to Ming makes sense because I have only really been training my aerobic system vs. my anaerobic system.  The really good news I took from all of this was that my CP (or FTP) went up by 30 watts with consistent easy training.  I can only imagine where it will go once I really start pushing myself.

So when I opened my training log yesterday, I noticed a whole new set of values. 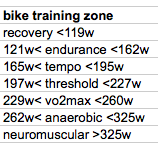 The next 3 weeks will be all about training my anaerobic system so I'm going to have to get comfortable with being uncomfortable.  I'll be hanging out in the higher end of this range a few times a week.  In fact, tonight will be my first hard workout.  It will also be a brick.  Nothing like having your first run after a marathon come AFTER a hard bike ride, ha ha.

Sounds like how I feel when my crossfit trainer puts me on the rower. 500m as fast as possible. I get heart palpitations sometimes--feel lightheaded. I know my heart rate is high when i do this. And I know its good for me to push through that anaerobic state. But it doesn't feel good, for sure!

This is fascinating information! I would love to have that kind of info about my running. And congrats on the improvement!