And So It Begins

I am a mere 5 days away from the first race of my season and normally I'm excited but this year I'm so not feeling it.   I'm blaming that entirely on the weather.  The Polar Vortex has made it's way back to Toronto so it is currently freezing.  That race day forecast I posted a couple of weeks ago....all lies.  I think I jinxed myself by doing that.  This is now what we are expecting on Sunday. 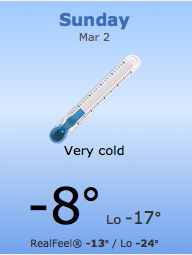 I had a great race last year, coming very close to breaking 1:30 without it even being on my radar to do so.  I also negative split the race by about 2 minutes.  I basically hauled a$$ for the last 7km, running as hard as I could.   I certainly don't expect a repeat of that performance this year, mainly because of the temperature.  I've been doing so much indoor training this year that running hard in the cold has become very difficult for me.   That being said, there is something about race day that makes just about anything possible.  I don't expect to come close to my Scotia PR but if I go sub 1:30, I'll be happy.  It will all depend on the wind, which right now is forecast as being 13kph out of the north east so it should be at my back on the way to the finish line.  But we all know how fickle the wind can be.  I'm convinced it blows in circles because almost every run I've done outside this year, it's been in my face no matter what direction I'm going.

I always go into this race with no expectations because it's the first race of the season.  I treat it as a test to see where I'm at.  I feel like my training has been going well, even with all the treadmill miles.  It's definitely different than last year with the addition of all these extra miles on the bike, which I'm sure will have some benefit in regards to my running.  I thought for sure that Ming would have me doing a long-ish bike workout on Saturday but he's given me the option of a half hour run, half hour ride or half hour swim.  I'm thinking it's going to be a ride.  Just a really easy spin to get my legs moving.

What I'm looking forward to the most is our post race brunch.  My friend Kiki and I are going for brunch after the race to start my birthday celebrations, because that's how I roll.  Start the celebrations early and celebrate for the entire week of my birthday, ha ha.   My birthday isn't until Monday but that's a minor detail.  After brunch we've been invited to our friend Carm's place to use the hot tub.  Perfect post race recovery!  So while I may not be terribly excited about racing in the cold, I at least have some fun things to look forward to afterwards!

Who else is racing this weekend?  Anyone else adjusting their race day expectations due to the Polar Vortex?

Posted by Phaedra Kennedy at 10:31 AM

Email ThisBlogThis!Share to TwitterShare to FacebookShare to Pinterest
Labels: racing, running, The Chilly Half Marathon

No race for me this weekend. I do start my official half iron training next week though. I was hoping that starting in March would mean mild weather, but it looks like all my runs will be painful cold if I don't want to do them inside. So I'm kind of cranky now. Enough with this winter already, yeesh.

I'm doing Chilly as well and agree that the freaking wind just blows in your face no matter what the weather says. Ya for lakeside running! My plans are also adjusted due to the winter/cold. I like your post race plans. Sounds like mine except I'm going free chili and beer and no hot tub. Happy birthday month, fellow March Birthday Gal.

I hope I see you there. I had a GREAT run on Sunday, and I was hoping to sub-2 at this race. But now...I am not so sure. SIGH

Good luck on Sunday. Maybe I'll see you & your amazing hair at the start line again. I ran the ATB route last weekend with the wind in my face the whole way. How does that happen? Talk about miserable. Winter winds be gone!

Good luck on Sunday! I'm running it too, hoping macnic up there can drag me to a new PB, but the weather will definitely be a factor. IME it doesn't matter which way the wind is supposedly blowing, it's always in your face coming west towards Brant St (I run along there all the time). Just a nice extra added challenge, I guess (this is what I tell myself).