If you had told me in January that I was going to podium in every race I did in 2013, except one, I would have said you were nuts.  Yes, I had high hopes for this year, especially after the end of 2012, and it did not disappoint.  I took my newly improved psyche / mental game and ran with it (literally!).  I upped the ante this year and signed up for the 13 in 2013 challenge to keep me motivated and racing.  I was so gung ho, I actually ended up racing 14 races this year.  I also set myself some lofty goals.

January and February saw me busting my butt and logging miles.  My first race of the year rolled around on my birthday on March 3rd.  It was the Chilly Half Marathon and it's a race I've done every year for the last 3 years.  I wasn't going to miss this year given that it actually happened ON my birthday.  I had no expectations going in.  I was just going to run it and try to negative split it.  I ended up running a 1:30:48, beating my previous years time by a couple of minutes, setting a new P.B. and ending up 3rd place in my AG.  First podium of the year and so close to 1:30 I could almost taste it.  Good things were in store, I could just feel it.

Fast forward 3 weeks to Around the Bay 30k.  This is the oldest road race in North America and it sells out every year.  They give you colour coded medals based on your finishing time.  For women, if you're 2:30 or slower, you get a bronze medal.  For 2:30-2:15 you get a silver medal.  For 2:15 or faster, you get a gold medal.  Last year I got my first silver medal.  This year I wanted a gold medal.   Realistically I should have used it as a training race for Boston instead of really racing it like I did.  But, I got my gold medal and my second podium of the year.

Racing ATB like I did kind of did a number on my legs.  I started having hamstring issues.  I was slated to run an 8km race as part of my Boston taper but I skipped it, opting to focus on getting as close to 100% as possible for Boston.  By the time Boston rolled around I was probably about 95%.  Of course that wreaked complete havoc on my mental game but I reminded myself that I was lucky to be there in the first place and that I shouldn't worry about the outcome.  My goal that day was to run happy and I can honestly say that I did.  I think that race will go down as one of my best.  I smiled for pretty much the entire race, even when I hurt and I ran the whole time.  I didn't stop ONCE.   The best part?  I came out with a shiny new marathon P.B by almost 2 and half minutes. 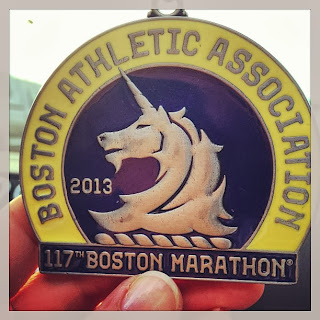 After Boston it was time to get busy on the bike so I could focus on my upcoming triathlon season.  I probably didn't ride as much as I should have but I seemed to have done enough to get me where I wanted to be.  I raced 7 tris over the course of the summer.  I think that was about two too many, ha ha.  It was literally race, recover, race, recover.  But I made the podium in each race I entered, so by the end of the season, I had enough points to win my age group for the series.  One of the great things about all this racing was that I raced myself into some seriously good fitness.  My run times started dropping like crazy.  By the time my season ended at the end of August, I felt really strong.  My training for Scotia started and I watched my times at the track drop to places I've never seen them go.  I was pumped. 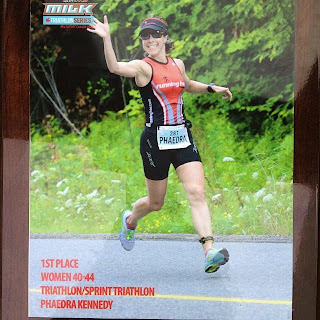 Scotia was my second A race of the year.  This was the race I was hoping to break 1:30.  Watching my times drop in training, I gained boatloads of confidence.  I knew well ahead of time that I was going to do it.  I could feel it.  I was so excited for this race, I could barely contain myself.  My new question was how fast could I go?  I had a number in my head that I only shared with two people.  I crossed the finish line in 1:27:11.  Pretty much exactly where I thought I'd be. The best part was that I ended up 3rd place Masters female.  This was HUGE given the size of this race and the caliber of talent that usually races. 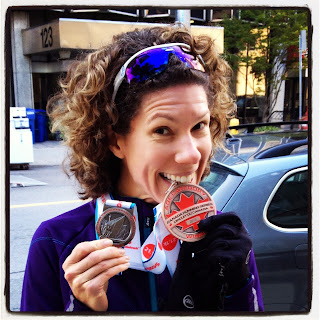 After Scotia, I started to wind things down.  I still had one race on the calendar, the Tannenbaum 10km in December.  I kept up my tempo work but took it easy on Thursdays, just putting in miles vs. pushing myself with interval training.  My goal for Tannenbaum was to break 40 minutes.  I figured if it wasn't windy, I'd be able to do it.   Sure enough, race day was calm.  I cranked out a 39:39.  I broke the previous masters course record by over almost 3 minutes.  What a fantastic way to cap off such an incredible year. 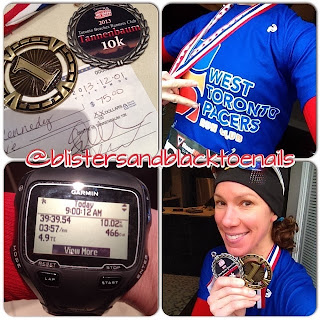 I say that this was Lucky 2013 but really what it came down to was hard work.  I know I wouldn't have been able to train and race the way I did this year if I didn't have a good support system.  So I suppose from that perspective, it really was Lucky 2013.  I'm lucky that I work for a great company that understands and appreciates my passion.  I'm lucky I run with a great group of people that make me work hard.  I'm lucky that I have an awesome group of friends both real and virtual who support and encourage me.  I'm lucky that I have an amazing crew of people who make sure I can keep pushing my body:  my friend and massage therapist David & my PT Meg at Synergy.  And mostly, I'm REALLY lucky to have such an incredible husband who supports all my crazy endeavours.  He is my biggest cheerleader and believes in me more than I believe in myself sometimes.

2013 is going to be hard to beat.  It's definitely going to go down as a very memorable year.  That being said, I'm looking forward to making some epic memories in 2014.   It's going to be a Year of Big Things.  I can feel it.

A big thanks to all of you that read along here & follow me on twitter & instagram.  May your 2014 be a year of good health, happiness and milestones.

Posted by Phaedra Kennedy at 4:04 PM

Email ThisBlogThis!Share to TwitterShare to FacebookShare to Pinterest
Labels: #13in2013, year in review

Wow, what an amazing year you've had! Awesome half marathon and 10K PRs/PBs. And 7 triathlons! I think I did the same number and by the end of the season I was definitely on fumes. Good luck in 2014!

Congrats on all you've accomplished in 2013 and all the good things to come in the new year! I'm a non-runner, but I find your blog so inspirational! I get pumped up just reading it!

I am basking in the light of your awesomeness... I don't know if I've said it before, but if I was going to hire a coach, I'd probably put you at the top of the list. I know you're not actually a coach, but how much better could so-called professionals do? ;-)

I tried to comment on this yesterday but it didn't work from my phone. Just froze and booted me out. Let's try this again.

I just wanted to say that you freaking rock and you have had the craziest, most awesome year ever. I felt like I was watching you race every weekend!!! Okay, I'm exaggerating but you get it. You are one of the most dedicated and hardworking people I know and deserve every bit of goodness that comes your way.