A while back I hinted at a big adventure for 2014.  Well folks, the pieces are all falling into place.  The final piece to the puzzle was put in place this morning and quite frankly, I'm so freaking excited I can't even bear it.  Next year is going to be EPIC.  Why?  Because G and I just signed up for this: 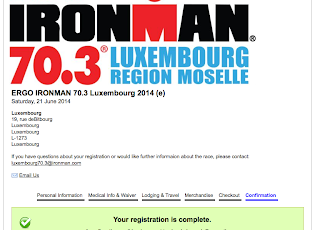 Yes folks, that's a 70.3.  And yes, it's in Luxembourg.   We are off to race in Europe once again.  Why Europe?  Well, why not I guess.  It came about on my suggestion that we take a nice trip to Italy in the summer to celebrate 10 years of marriage.  G said that would be great.   A couple of months later G says, I'd like to do a 70.3 next year.  In Europe.  Ok, not really my idea of a nice romantic holiday but the more I thought about it, the more excited I got.  After all, this is what we love to do together.  Yes, I'm a bit apprehensive about doing a longer distance race.  Especially the swim.  BUT, I have to remind myself that this is a half Ironman.  I made it through 2 full Ironman races in one piece, I know I can get through this.  That being said, I am never happy to "just get through" something.  That is not in my nature.  I am a competitor and I want to go out and race it.  With my early season race card filling up and my lofty goal for Boston, I didn't think I could hammer out a training plan that had me peak for Boston, while still getting a good deal of cycling in and then peak for Luxembourg a short two months later.  I needed help.

Enter my friend and colleague Tom Nesbitt.  He mentioned to me that Real Deal Racing was putting together a multi-sport team and he had talked me up big time to one of the owners.  A few weeks later, I happened to meet said owner (Mike Mandel) and talked to him briefly about coaching.  I was just starting to do some research on coaches.  I am definitely someone who follows her gut and I immediately liked Mike.  But I also feel I have to investigate every avenue so that's what I did.  But I came right back to the guys at Real Deal.   I wanted to have my FTP test done so I contacted Mike and said I'd like to go ahead with that at least and that I'd like to talk to them about coaching.  So the night of my test was also like an interview.  They had to make sure I wasn't nuts and that we were going to be a good fit as a team.  By the end of that test, I was completely sold.  Both Mike and Ming are great guys and I'm so excited to be working with them this year.  I have complete faith that they will help me get to where I want to be and it's nice to know that they are excited to be working with me as well.  To quote Mike: We are taken by your passion and excited by your past results and considerable potential.   To say I'm pumped would be an understatement.

The other big change for 2014 is that I will no longer be racing for Team Running Free.  I am now a part of the Real Deal Multi Sport team.  It's a small but mighty roster of talented athletes and I am honored to be one of them!

2014 is definitely going to be the year of the Real Deal.  Booya!
Posted by Phaedra Kennedy at 9:55 AM

Awesome!! I would love to race/run/live in Europe. You're going to have a wicked experience!

Congrats to you and looking forward to reading about your year ahead!

That will be an amazing adventure!