As part of my "Big Things in 2014" plan, I decided I should probably get my functional threshold power tested on the bike.  I had my lactate threshold tested on the run just over 2 years ago and on the bike about 7 years ago but this whole "functional threshold" thing was new to me.  After doing a bit of research it is essentially the same thing except the number you end up with is not heart rate based but power based.  It's a number that is measured in watts.  What are watts?  Watts, in the most basic of terms, are the amount of power you are able to generate on the bike.   Why is this important you may wonder?  Well, unlike heart rate, which can be influenced by many things like temperature and dehydration, watts are absolute.  Your power is your power, period.  Thus, for training on the bike, it makes much more sense to train with power vs. heart rate.  Now that I have a computrainer, it's something that I want to take full advantage of.  Especially if I want to improve my cycling.

Enter Mike Mandel & Ming-Chang Tsai from Real Deal Racing.  Real Deal offers FTP testing as well as coaching services and computrainer classes all over the city.  These guys know their stuff.  They live and breathe cycling.

So last Thursday I dragged my slightly scared butt over to RPM for a 90 minute session with Mike & Ming.  One of my fellow coworkers has been participating in a study with Ming and has referred to him as Dr. Pain.  He posted a video on Facebook of the end of one of his testing sessions.  It was scary stuff.  So I was super nervous.  I know how to push myself on the run and I've learned to handle that pain but the bike is a whole other world.

Mike got my bike up on the trainer and I hopped on and did a warm up.  I chatted with them about racing and next years plans and then Mike explained the test to me.  He was going to have me do some cadence drills to get me really warmed up, then I was going to do a few one minute efforts and then I was going to go into a 20 minute all out ride.  The key, he said, was to not go out too hard or your power would drop off substantially by the end.  In running terms it would be like hitting the wall in a marathon.  Mike advised me to pick something to focus on to take my mind off the eventual discomfort I would feel.  I opted to focus on my cadence up on the screen in front of me.

I watched the countdown on the screen and as soon as the 1 disappeared from the screen, I cranked the pedals.  I watched my watts spike.  I shifted gears to find the right balance of cadence and power.  I settled into a pace that I thought I'd be able to maintain for 20 minutes.  The first 5 minutes didn't feel horrible.  I was toeing the line between comfortable and uncomfortable.  Mike asked me what my effort level felt like and I said about an 8 out of 10.  I went on to say it kind of felt like a tempo effort in running, because at that point I could still speak in full sentences.

I was thankful for the spinning class that was happening because the instructor had some good tunes cranked.  The next 5 minutes definitely felt harder and I could see my heart rate had started to climb into the 170's.  That was definitely 10km race pace territory.  My breathing became more and more laboured.  I kept my eyes on my cadence, occasionally glancing up to look at my watts.

I watched my watts start off around 192 or so and then by the time I hit the halfway point of the test they had dropped to 190.  I didn't want them to go below 190.  No rhyme or reason for it, I just didn't want it to go below that.  At the halfway point Mike says you're past the hard part, this is going to be easy.  I laughed.  Because at that point I could still laugh.  Then the encouragement started.  Both Ming and Mike were encouraging me to push harder and try to get my watts up to 191.  I dug a little deeper.  I hit 191.   More encouragement to go for 192.  The shovel came out and I dug a little deeper.  I saw 192 come up on the screen.  At this point, I was really starting to feel the pain.  I was told I had just under 8 minutes left.   Good God.  I knew it was only going to get worse.  More encouragement from the guys to get one more watt.  I found 193.  My heart was in my throat.  My legs were burning.  Mike asked me what my effort level was and all I could say was hard.

With just under 5 minutes left I was at 193 watts.  The guys were pushing me to get to 194.  They were joined by a woman who was setting her bike up for the time trial session that was scheduled after.  She chimed in by saying I was the leader and she was chasing me, she was right on my tail.  That seemed to light a fire under me and I managed to crank out another watt and hit 194.  At this point I could not longer focus on anything.  I was working so hard I couldn't see straight.  My cadence appeared as a blur on the screen in front of me.  The boys were pushing for one more watt.  I didn't think I could do it.  I put my head down and hammered on the pedals.  Just when I felt like I was going to die, I heard the cheers.  I hit 195.  Now all I had to do was hang on.  I had less than 2 minutes.  I put my head down and kept grinding.


When Mike announced I was done, my first words were "Somebody get me a bucket."  I immediately stopped pedaling but Mike said I shouldn't stop.  So I sat up and switched gears so my legs could spin.  He said I could stay there as long as I needed to so I did.  I was actually a little afraid to get off my bike as I wasn't sure if I'd actually be able to stand or walk.  So I spun my legs until my heart rate came down and I had some feeling in my legs again.

I maxed out at 195w.  To determine your functional threshold power, you take your max watts from this test and minus 5% so that put me at 186w for my FTP.  I have no idea if that's good or bad, all I know is that it can be improved upon as my cycling fitness is next to non existent.

I can honestly say that's probably the hardest thing I've ever done physically.  But I'm glad I did it.  I now have a training tool to help guide me through my winter training.  Once I start riding outside, I'm going to have to invest in a power meter if I want to continue training and racing with power.   That's a whole other expense that I don't want to think about right now.  So many toys, not enough money, ha ha.

This is what I got at the end of my test.  I can do this test again on my own at home in a few months to see if I've improved.  Not sure if I want to go through that kind of pain again, but I'm sure my curiosity will probably get the better of me. 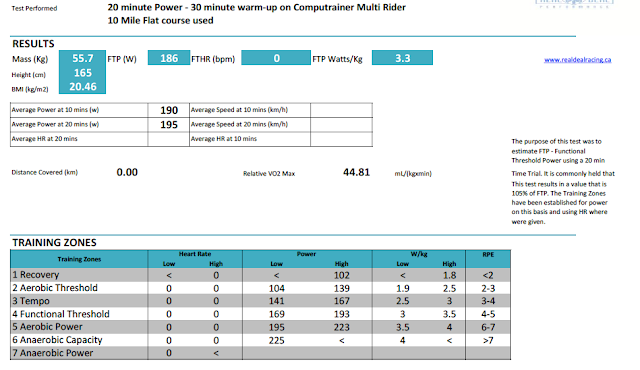 Have you ever done this test?
Posted by Phaedra Kennedy at 7:52 AM

Wow, that sounds intense. I have never done a test like that but it sounds like it could be really helpful for your training!

Holy cow. Just reading this made me feel sick to my stomach!! Somebody get ME a bucket!