I made it through my first week of 70.3 training, a.k.a "Mingsanity" relatively unscathed, other than the cold I had Tuesday / Wednesday which caused me to miss two workouts.  This in turn, altered my schedule for the rest of the week.  Even with this, I still managed almost 10 hours of workouts.  Good Lord.   The craziest part of this is that BOTH of my runs this week were done on the treadmill, including my 20km long run.  I can honestly say I don't think I ever want to do that again.  I was really hoping that the mild temps that rolled in on Friday would have melted everything on the ground by Saturday morning.  In some areas it was just wet but for the most part the roads around my neighbourhood were a slushy, icy mess.  When I saw the temps for the weekend I was so excited because I thought I'd finally be able to run outside again.  I even got up early so I was out on the road earlier than normal.  I made it exactly 350m before I opted to turn around due to the incredibly dicey footing.   Foiled once again by Mother Nature, the nasty wench.

I am really really hoping that today's mild temperatures finally get rid of the remainder of the crap on the roads because I don't think I can face another treadmill run.  I may actually resort to doing this to one of my older pairs of Mizunos just to get me through the next little while. 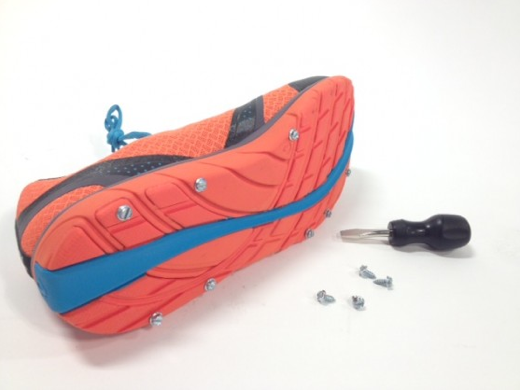 I guess that's enough kvetching about the weather.  I *do* live in Canada so I'm going to have to learn to suck it up I guess.

Now, on to the FUN! I'm going to be linking up with Kat over at Katrina Elle for her Weekly Workouts Round Up!   Let's see how my first week of 70.3 training went down.

Normally I take Fridays off but because I was sick on Wednesday, I opted to go and do a short swim.  I'm thinking I probably should have just taken the day off because that now means I've got 8 straight days of workouts instead of 6.  We'll see how this old body of mine handles it.

I have to admit, I'm really loving the bike right now.  I think I am finally dialed in fit wise.  I can crank out almost 40kph on flats without too much effort so that's a good sign.  Now I just need to get used to my saddle.  I think riding with this girl on Sundays also makes it way more enjoyable.  It's so nice to have some company on the longer rides!  Kiki is also training for a 70.3 at the beginning of June so we're kind of on the same schedule.


Anyone else dealing with ice / crappy weather?  If so did you brave it and go out or did you opt for the treadmill?
Posted by Phaedra Kennedy at 9:49 AM

Great way to get it done, even if it wasn't ideal to be inside so much! Have you looked into the Yaktrax Run for your shoes? I got a pair for xmas, I should have brought them out for Saturday's run, but I made it through unscathed! Keep up the awesome work!

Luckily I don't have to deal with the weather. However, you look like you got in lots of great workouts anyway.

Way to get it done! I need to get myself back in the pool. Sigh. I made it outside for a run Saturday, but the ice was out in full force. I did around 3.4 miles but I was wayyyyyy slower than usual.

Way to get all that training in, despite being sick! I've done four runs on the treadmill this week due to the snow and ice. I don't mind the snow, but ice poses a lot of risk! What 70.3 is your friend doing in June?

Sara- yes, I have Yak Trax but I don't use them unless it's really snowy out. I don't like the feel of the springs underfoot on the harder surfaces.
Abby, I can't even begin to tell you how luck you are!! :)
Thanks Courtney!
Kristen, she is doing Eagleman which I think is either June 7th or 8th.

You are killing it on the bike! Teach me your way oh wise one! I still don't think I have found my bike groove by I am hoping that will come more naturally when I can actually get outside!

Quinton told me he would put screws in my shoes for me but I wouldn't know which ones to "ruin" for that. My feet are so weird and I am so sensitive using old shoes so I didn't let him do it! I actually ran outside on Sunday and it wasn't the best. I got my long run done but I did have to stop my Garmin quite a few times as I had to tip toe around big icy patches or hop over slush puddles. Hoping for better conditions this weekend!

I can't believe you did 20km on the TM. Bananas.

I've been considering putting the hex bolts into the soles of my shoes, but I'm too scared of the sharp points stabbing me in the feet.

I'm not sure if you've done it elsewhere, but you shouldn't let a good Flash Gordon reference go to waste... Ming the Merciless!