I came about this treatment modality completely by accident.  I was complaining about my knees to my chiropractor and he was surprised that with everything I had been doing to fix the issue, that I was still having pain.  He suggested we try shock wave therapy.  It's usually a last resort because it's fairly expensive (most places charge $170 or so a treatment!) however Pivot had discounted their service at the beginning of 2015 and never changed it so I thought why not, what have I got to lose?

What exactly *is* shockwave therapy?  The medical term is Extracorporeal Shock Wave Therapy (thus ESWT) extracoporeal meaning that it's performed on the outside of the body.  From what I understand, there four different types and it depends on the machine being used.


What does shockwave therapy do?

According to Wikipedia:  "Shockwaves stimulate angiogenesis (new blood vessels) and neurogenesis (new nerve cells).   The exact physiological mechanisms at this stage are poorly understood, but it appears that the cells undergo microtrauma which promotes the inflammatory and catabolic processes that are associated with removing damaged matrix constituents and stimulates wound healing healing mechanisms."

In layman's terms, shockwave therapy stimulates healing in areas that are usually slow to heal, like tendons.  In addition to stimulating the healing process, shockwave also seems to have an affect on the nerves, assisting in diminishing pain.

1) "Through hyperstimulation anesthesia, where the nerves sending signals of pain to the brain are stimulated so much that their activity diminishes, thereby decreasing or elimination pain.  This effect is sometimes short lived."*

2) "It is also believed to diminish pain over longer periods of time through the stimulation of the "gate control" mechanism where the nerves can be stimulated to "close the gate" to pain impulses sent to the brain.  It is thought of as activating a "re-set" button that recalibrates pain perception"*

This was the reason Peter suggested it to me.   I needed a reset as I think I had become so sensitized to feeling pain in my knees.  We needed to find the "off" switch.

The therapy I had done was actually radial pressure wave therapy as evidenced by the machine that was used (this took some digging on good old google!).  The practitioner applies a wand to the affected area and that is what emits the pressure wave. 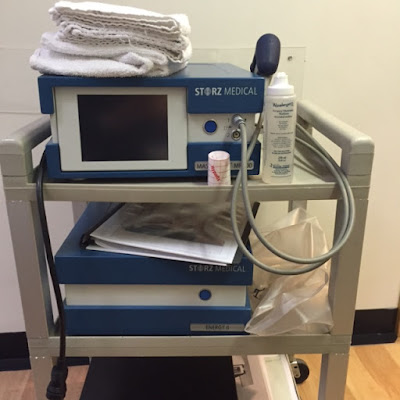 I think that depends on who is administering the treatment.  I had two people treat me at Pivot.  Peter and Yuri.  Peter takes a more aggressive approach with me, which I appreciate as it usually gets results.  Yuri had a bit of a softer touch.  Either way it hurt.  The best way to describe it would be a like sonic jackhammer beating on your tendons.  Depending on the setting of the machine it can be mildly uncomfortable to fairly painful.  I was never sore afterwards, there was just a dull achy feeling.  I was told not to ice or take anti inflammatories as that would adversely affect the shockwave work.

I had the recommended 4 treatments and I'm completely pain free now,  so I'd say that it does.  Especially since I've been dealing with this for the last 2 years.  It took away all the sensitivity I was feeling around the outside of my knees and now that I'm working on proper movement patterns I think I've rounded the bend.  I know of other people that have used it successfully to treat plantar fasciitis.  However there are many conflicting studies out as well.  So, like most things I guess it depends on the individual.

I'm so glad Peter suggested it as I think that was the off switch that I so desperately needed.  It helped me move into my next phase of healing which is the work I'm doing with Lauren.   Things are definitely moving in the right direction now and I couldn't be happier!

Who else has had success with shockwave therapy?