Happy Tuesday Gang! I'm coming to you from Ocean City, Maryland for today's Tri Talk Tuesday. Cynthia and I are fresh off our Eagleman races so no better time than now to talk about race day etiquette! 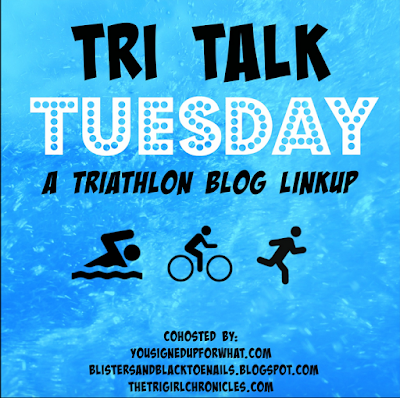 There is a lot to think about in triathlon and it can be so overwhelming sometimes. So much so that sometimes things like common courtesy go out the window. It doesn't have to be that way if you treat the race like any other social situation (for the most part) Here are my top 6 race day etiquette tips.

1. Know the Rules! Triathlon Ontario and USA Triathlon have rules that need to be followed. You can find them here and here. Read them and understand what you need to do to have a safe and fun race and avoid landing in the penalty tent or even worse, being disqualified. Apparently there were a lot of people that misread or misunderstood the rules because when I passed the penalty tent on the bike course, it was jam packed.

2. Be Aware of Those Around You. This is especially important on the bike. I was shocked at how many people were weaving all over the place or even worse riding in the middle of the road on Sunday's race. Not only is that dangerous for your but its also dangerous for other competitors. I can't tell you how many people I saw cross the centre line to get around other people. Which brings me to my next point.

3. Speak Up. When coming up behind someone on the bike that happens to be either riding in the middle of the road or riding erratically, don't just try to pass them, make them aware of your presence and intention to pass by saying 'On your left'. If you hear someone say that, move over to the right and let the person pass. I always make a point to say thank you when I pass someone that has moved over for me.

4. Stash Your Trash / Don't Litter! This is common sense. I do believe there are penalties now for littering. Keep your trash on your bike or person and dispose of it either at an aid station or in transition.

5. Share The Rack: Transition is always a tight spot, especially if the race is sold out. If you happen to arrive early, don't take over multiple spots. Rack your bike and set your stuff out neatly and as close to your bike as possible.

6. Use Your Manners: I always make a point to say Thank You to the volunteers. They don't have to be there, they've taken time out of their day to help out. So say thanks. I also make a point to cheer on my fellow athletes. If someone passes me, I always say good job. And vice versa. On Sunday's race I cheered on any girl I saw in a Smashfest Queen kit. There was a lot of "GO SMASH!" out on the course which made for a fun day.

Those are my few bits of advice to keep in mind while racing. Is there anything else you'd add to the list?

Make sure you head on over to the link up and check out all the other posts!

Posted with Blogsy
Posted by Phaedra Kennedy at 7:52 AM

The bike etiquette is probably my top pet peeve. So many cyclists don’t stay to the side and weave around the road as though they own it. This has been a problem in all of my races. I don’t understand why it is so difficult for people to stay to the side (unless passing). Rocket science? I don’t think so.

And yes, use your VOICE! A triathlon race is no time to go completely silent. Whether its letting other athletes know you are passing or thanking the volunteers, no athlete should go from start to finish in silence.

Interesting timing (and reading - great post!). At my tri on Saturday there was a couple ahead of me for part of the bike who were irritating me because they were so flagrantly breaking the drafting rules. I know they were together because they traded water bottles a couple of times, and I saw them running together later in the race. Anyway the female half wasn't just drafting a little bit, she was right on his wheel the whole time I was following them (which was quite a while as we were going around the same speed). Eventually I got so annoyed I passed them, but I'm pretty sure she sucked his wheel for the entire bike. I wanted to say something when I went by them, but I didn't (maybe they just didn't know about the drafting rules?).

Kinda wished I had said something, though, when I saw later she won an age group award. Really unfair to the girls who finished behind her that she got such a huge advantage on the bike. I dunno, do you say something in that circumstance? Just hope they got spotted and penalized? I know it's sometimes hard to stay legal when the course is crowded, but this was just blatant.

Definitely good points. I hear you (and one of the prior commenters) on speaking up, although depending on the intensity of the race I'm not a big talker as I'm using my breath to fuel forward progress. I may shout "left", but I'm expecting others to also know the rules, hold their line, and check behind them before moving out to pass (I realize this is a pretty big ask...as pretty much every person linking up today has complained about the same issues on the bike course). Excited to hear your race report and I will be heading north later this week for Mont Tremblant!

I love today's link up! Especially about sharing space on the bike rack! Some people think the whole thing is for them! I hope more people will read this and figure it out! haha!

Great tips! There was some serious weaving going on Sunday by cyclists. I will confess that those rumble strips freaked me out in the beginning of the bike course since I was passing so many people, that I stayed on the outside of them for a while because going in/out of them every few seconds was feeling dangerous.

The third point is something that should also be taken outside the race. I know a few times I've nearly been run down by a cyclist who couldn't be bothered to give a shout-out so I wind up screwing up and going the "wrong" way... Frustrating.
- Krys