Last Sunday marked my first long run since the beginning of June.  I thought it might be ugly but it actually wasn't too bad.  Probably because I went out really easy.  Much slower than my normal long run pace.  I've been operating in my anaerobic zone for a large part of my weekly mileage these days and I feel like it's time to slow things down.  I honestly feel like I've lost some of my aerobic base.  Sounds weird given the amount of endurance activities I do over the course of a week.   I guess you could say I have a good overall endurance base but in terms of specifics, my run base has suffered a bit over the last few months.  Given that it's the middle of race season, I'm not ready to stop everything and focus on completely rebuilding it.  That will come in November and December.  I will do the same with my cycling because that REALLY needs some work.  I have to credit Miss Zippy with putting this idea into my head.   She wrote a series of excellent posts on rebuilding her base.  She wanted to get to the bottom of why she was always crashing and burning in marathons.  I had similar problems, until this year with Boston.  It was the first marathon I actually ran from start to finish, no stopping, no walking, nothing.  Yeah, it hurt but I never felt like I couldn't continue or that I had to stop.  Every other marathon I've run, I've had to stop and walk at *some* point during the race.  Including my two Boston Qualifiers.   Perhaps I've finally gotten myself to the point where I have developed a good base, I don't know.  But I also figure it wouldn't hurt to take the time to lay off the speed and be kind to my body before I go back into marathon training mode at the beginning of January.  Sure, I'll lose a fair bit of speed if I take that time off but I know it will come back once I get going again.

So last Sunday I laced up my Yellow Birds and ran for time instead of distance.  I ran just under 15km in 1:17: and change.  Normally I would have been around 1:15:00 or even a bit faster if I trained in my "normal" zone (zone 2) 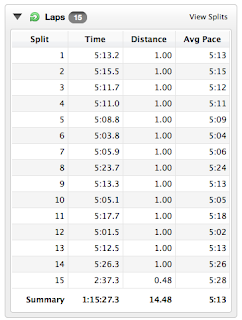 The goal is to keep my heart rate in zone one.  If I base my HR on my lactate test from 2011, my heart rate zones pan out like this:

I trained for Boston mainly in zone 2.  If I look at following Miss Zippy's program I'd be running with a heart rate of roughly 143.  Which is safely in my zone one.   I tried that on last week's run.  It wasn't easy especially since it was so hot out.  Tomorrow is likely to be the same.  But I think it will be worth it in the long run.  See what I did there?

One thing I may do in the off season is get my lactate threshold test done again.  Especially since I've been racing consistently for the last couple of years.  I'm sure it's probably changed a bit.  In the meantime, I'll spend the next month doing my long runs with my heart rate in zone one, then it will be time to ramp things up for my Scotia Half training.  Sub 1:30 or bust baby!!!

Posted by Phaedra Kennedy at 4:46 PM

Interesting!! I was wondering yesterday how my Garmin put my time worked into zones since I don't have an HRM attached to it...