The Sunday Ritual, A Different Path & A Reboot

Yes, it's Sunday again.  Normally I'd be writing this sprawled on the couch recovering from my long run but, I decided to dice things up this weekend and do my long run yesterday so I could swim and ride today.  Not only did I run yesterday, but, instead of following my usual westbound route along the lake, I opted to run east and then north up the Humber River Trail.  I hadn't run up that trail since late last year so I figured it was high time.  I also figured a hilly-ish long run would do me some good because NYC is not flat.  At least that's what I've been told.  So I went Eastbound yesterday and I'm so glad I did.  Even though my legs didn't feel great, I felt energized to be running somewhere different.  I also discovered a new path that is partially completed.  Right now they are working on extending it east to Marina Del Rey / Humber Bay Park.  I'm hoping that they will also extend it in the other direction because it would be so nice to run right along the water instead of running along the sidewalk on Lakeshore.  It was a nice little diversion off of Lakeshore even if it was only about 5 minutes.  The view of the city and the Etobicoke yacht club wasn't too shabby either.

I had hoped to be out on the road by 8:00 am but that didn't happen.  I was tired and really dragging my butt so it was closer to 9:00 by the time I actually left the house.  It was a gorgeous day out so it was a busy morning on the paths.  Lots of runners, cyclists, walkers, you name it, they were out.  And why wouldn't you want to be outside on a day like yesterday?  Days like this are going to be few and far between in a couple of months so we might as well get out and enjoy it now!
The temperature was perfect.  I almost wished I had a tank top on when I was in the sun but most of this run was in the shade and there was a cool-ish breeze so I was actually quite comfortable.  Once I hit Humber Bay Park East, I turned north and followed the Humber Trail.  There are a few rollers on the way out but for the most part is a gradual climb.  You are working just hard enough on the way out.  It's mostly bike path but it's peppered with a bit of dirt and gravel trail which I quite like as well.  I wasn't sure how far up I'd get.  I guessed that I'd make it to at least Dundas maybe further.  I was way off, I made it way past Dundas and almost up to Eglington before I turned around.  I was hoping I'd be able to maintain a sub 5:00 min/km pace but my legs had other plans, especially for the first half hour of the run.  But, I managed to pick up on the way back, especially since it was downhill.  I think this past week of not enough sleep, less than optimal eating and a deep tissue massage that I hadn't quite recovered from all played a part in my slower than normal pace.  But, whatever, we're all going to have days like that so I didn't worry too much about it.  Especially when you've got scenery like this to distract you.

The important thing is, I got it done.  I actually quite liked doing my long run on Saturday.  It's nice to have a quasi lazy Sunday.  Sure I still got up early to do my swim but I was back home by 9:45 even with a stop at the grocery store.  Love it.

After last week's horrible eating, it's time for me to get back on the wagon.  By the end of last week, I felt gross and bloated.  I hate feeling like that so it's time to re-stock the freezer.  I've been a busy little lady this afternoon.  I cleaned out and re-organized the fridge.  I finally used one of the 2 heads of cauliflower I bought last week.  I cut it up and roasted half of it with garlic, olive oil and lemon.  Easily reheated or eaten cold. 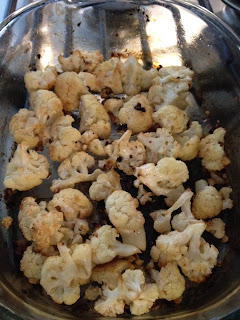 The other half I cooked in 1/4 cup of water + 1/2 a can of coconut milk until it was really soft.  I tossed in a few cashews that I had kicking around as well.  Once the coconut milk had cooked down, I turned the heat off and let it sit for about 15-20 minutes.  I mashed it up with a fork and then took my immersion blender to it and whipped it to a nice smooth consistency.   I think that will be part of my dinner tonight.
I've been wanting a change of pace for breakfast so instead of making my usual frittata / quiche, I decided to make a couple of mini ones and then cook up some quinoa to have on the days I'm not eating these.  I could have made them crustless but I kinda like the crust.  I didn't think a chick pea crust would go well with the ingredients I had on hand so I opted to make one out of ground flax and hemp seeds.   The filling consisted of sauteed spinach, smoked salmon and goat cheese.  Had I actually had dill, I would have put that in as well.   I think they look pretty good.  We'll see how they taste.  The good news?  I actually had the foresight to write down the recipe!

Mix ingredients together in a bowl.  Divide in half and press into an oiled ramekin.

You could probably skip this next step if you want but I like a crunchy crust so I opted to bake the crust for 10 minutes at 400 degrees.

Sautee spinach in oil and water until wilted.  Add to ramekin.  Add cut up salmon.  Beat egg and egg whites, season with salt and pepper, add dill if using and mix in.  Divide evenly between ramekins.  Break up goat cheese and drop into egg mixture.
Place on top rack of oven and bake for 20-25 minutes or until mostly set.  I tried not to cook them until completely done as I will be re-heating them for breakfast and didn't want them to be over cooked.

That will be my breakfast tomorrow.  Can't wait!  I just finished cooking chicken burgers from a Martha Stewart recipe that I tweaked a bit.  Will have to post that one later on this week.  I am hoping to be able to make this recipe later on this evening, I'll just have to figure out what flour to substitute as I'm running very low on almond meal.  I do love me some pound cake and this one looks pretty darn good.  I'll have to remember to portion and freeze it asap so I don't eat half of it one go!

Despite my busy week, I still managed a decent week of training.  I worked really late on Thursday so I was planning on taking Friday as my day off.  It's just as well, I was totally zonked by then.  This is how it all went down this week.

+ 40 minutes of strength training.  Just over 8 hours of workouts this week.  Not bad. I suspect that total will start to climb along with my mileage over the next few weeks.  Crunch time is coming!

What did you get up to this weekend?
Posted by Phaedra Kennedy at 5:00 PM