I'm usually a bit of a stickler for rules or guidelines, especially when it comes to running.  One of the golden rules of running is not to experiment with anything new on race day.  Which is something that I've followed fairly religiously.  Until now.

I'm going to be wearing a brand new pair of running shoes to race in.  Granted they are the same model I've been wearing for the last year, they are just the newer version.  Apparently there has been very little change to the shoe other than the colour and the fabric.   But, they are still brand spanking new shoes with zero miles on them.  I'm just about to rectify that and take them for a spin around the block to get them a little dirty.  They are a bit on the obnoxiously bright side.

I'm a little apprehensive about wearing new shoes but my other ones are completely shot and I can't imagine running a half marathon in them let alone another 5km.  So tomorrow morning I'll be lacing these babies up and going for broke. 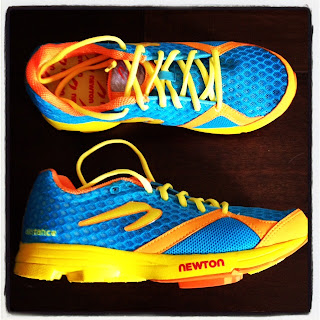 Posted by Phaedra Kennedy at 3:59 PM