Looking for my Game Face 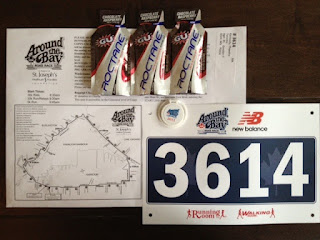 Tomorrow I'm slated to tackle the oldest race in North America;  Around the Bay 30km.  I had high hopes for this race at the beginning of my training.  Not to say that I don't have high hopes any more, they are just being tempered by my reality as of late.  I'm coming off some leg issues and I barely eked out 29km last weekend.  I can't even begin to imagine racing 30km.  My original goal was 2:20.  I think if I'm smart and I pace myself properly that may still be doable.  That's 4:40/km's.  I do know I'm not going to race it like I did the Chilly Half.  My thought process going in to that race was to just run as hard as I could for as long as I could.  It totally worked that day.  This race is 9km longer.  9km is a long way if you've already covered 21km.  It's also a long time to suffer.

I'd be lying if I said I wasn't a wee bit scared.  I know that if I managed to run 29km last week, then I should be able to run 30km this week.  But the memory of just how slow and uncomfortable last weeks 29km is still lingering in the back of my mind.  I know that the only person who really cares about my time is me.  Nobody else.   So what does it matter you ask?  It matters because if I don't make my time, I will feel like I failed.  Absolutely ridiculous, I know.  The fact that I went out and did it, doesn't seem to count for anything when in reality, it should.  It doesn't mean I am any less of a person because I didn't make my goal time.  This is the curse of a hard headed competitive runner.  In fact it doesn't mean anything in the grand scheme of my life.  It's a small dot in the larger picture.  Learning to let go of these expectations is a slow going process.

So I'll have to be smart tomorrow, which, when I'm left to my own devices, doesn't usually happen.  I am going to spend this afternoon relaxing & trying to figure out how to set my Garmin to keep me on pace.   I'm also going to spend some time trying to find my game face.  I'm sure it's here somewhere, I just need find it.
Posted by Phaedra Kennedy at 1:49 PM