The last 72 hours have been a total whirlwind and I feel like I've been hit by a Mac truck....but it was SO MUCH FUN.  On Friday we loaded up the car and went up north.  We had two good friends of ours that were doing their first Ironman in Muskoka so we wanted to support them.  We were staying at a friends cottage in Dorset which is along the bike course so we signed up to volunteer at the aid station there on race morning.  Friday night it took us 4 hours to get to the cottage.  If the roads are clear it's usually about 2.5 hours.  It was 11:30 pm by the time I went to bed.  We were planning on riding with friends Saturday morning and they wanted to go early.  I put the hammer down on that and said no, I wanted a bit of extra sleep so we were going to meet them.  For whatever reason, I didn't sleep well and ended up tossing and turning most of the night.  I got up at 6:30 and we were on the road by 8:00 am.  G and I rode the Muskoka bike course backwards from Dorset until we met up with our friends Pat & Jenn on South Portage.  We turned around and headed back to Dorset.  G wasn't feeling very good and neither was Jenn.  It didn't stop G from hammering back with Pat.  I hopped on their wheels and hung on.  I was actually feeling pretty good and I surprised myself by hanging on for quite some time.  We stopped in Dorset to regroup.  G pulled the pin as did Jenn so Pat and I continued out for another 10km or so and then turned around.  We hammered our way out to Raven Lake and I think Pat was surprised to see me right on his wheel.  I probably could have gone even longer but G had gotten everything he needed in Dorset and was ready to head back.  It was the first ride I've done in a while where I've felt really strong the entire time.   When I uploaded my ride to Strava I was treated to this: 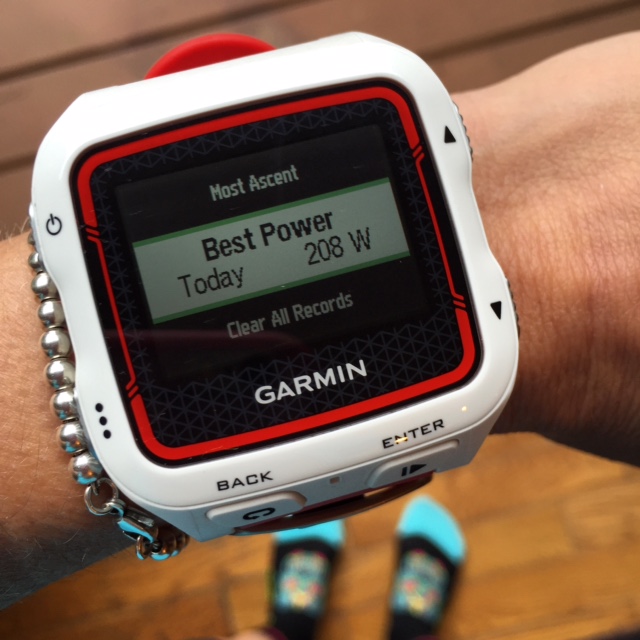 Another new 20 minute power PR.  Must've been the socks.

The rest of the afternoon was spent lazing around as the skies opened and it rained for the rest of the day.  I had an epic nap while wrapped up in a blanket on the couch.  I love lazy afternoons like that.   Even with my hour long nap, I was still in bed by 9:00 pm.  The alarm went off and 5:00 am we were up and at 'em.  We had to be in Dorset for 6:45 am to help start setting up.  We got there a bit early and were put to work right away.  The volunteer Captains there were Clint and Barb and they were the nicest people.  We spent a good hour opening bottles of Gatorade and stacking them on the table.  G and I were assigned to separate stations.  I was at the Banana station, which thanks to Sarah, my awesome partner, was probably the most fun station.   We had a Minions thing going, yelling "Bananaaassss" as the athletes went by so when they came by on the second loop, we got a lot of that as they rode by.  I was so busy cutting bananas I almost missed my friend David L.  He saw me first and pointed and then I started jumping up and down and yelling.  I knew my other friend David B probably wouldn't be too far behind him and sure enough about 20 minutes later, I spotted him and was ready with the cowbells.  I have a blister on my middle finger from the cowbell rubbing on it.  My first spectating "injury"  ha ha.  That at my throat is still pretty sore this morning from all the cheering I did. 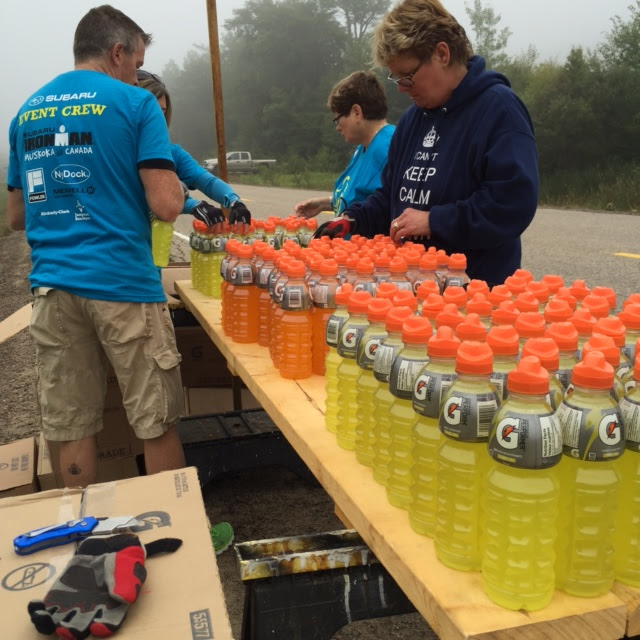 After we wrapped up our 5 hour shift we went back to the cottage.  I had planned on doing a 16km run but my legs wanted none of that.  I managed to drag myself out for 11km over some insane hills. 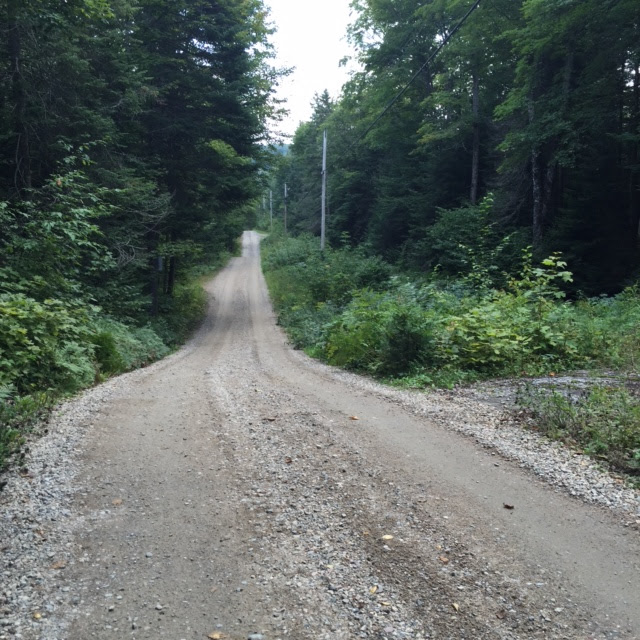 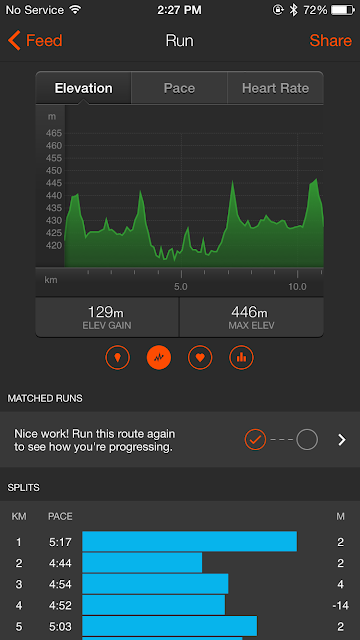 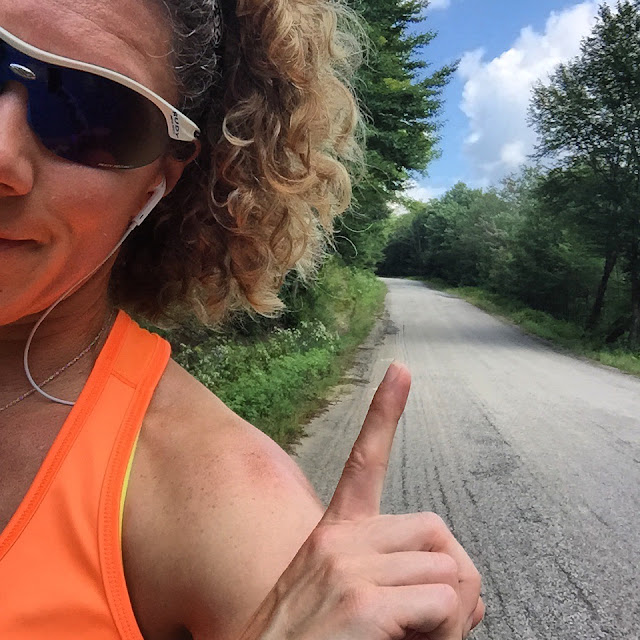 It was ugly and it hurt but I got it done.  We then packed up the car and headed into Huntsville to do some more cheering.  We saw the David's a couple of times along Main Street and then made our way into Deerhurst to get a spot near the finish line.  The finish line of an Ironman is a special place.  As soon as I heard Mike Reilly calling out "You Are an Ironman", I got goosebumps and a little emotional.  That's one thing I will never forget - hearing him say my name followed by those words as I made my way down the finishing chute at the Olympic Oval in Lake Placid.  What a day.  So of course we were super excited for both of our friends.  I kept tracking them online.  I figured David L was going to be on pace for about a 12 hour day and David B about a 13 hour day.  I wasn't too far off.   We saw David L come running down the chute just after 7:00 pm, so focused on that finish line.  He looked so strong.  He finished in 12:06. 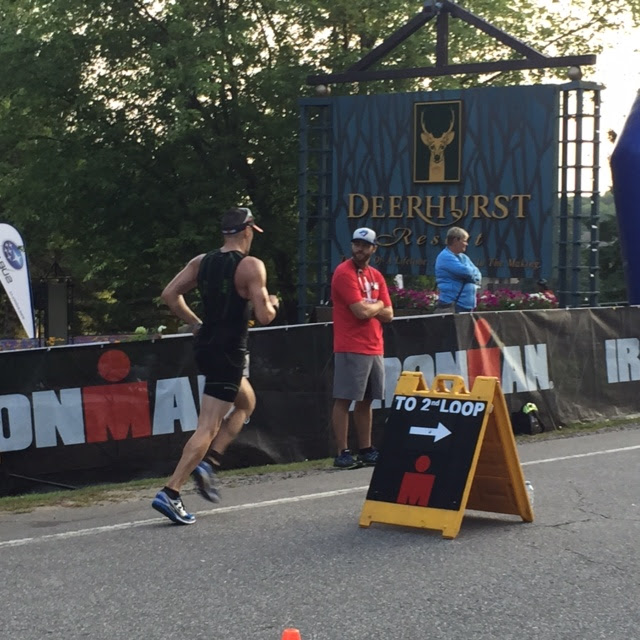 An hour and a bit later, we saw the other David come booking along the finishing chute.  He slowed up for some high fives.

He finished in 13:24.  We went and met up with them after - both of them were really happy with how their days went.   I am so proud and happy for them both.  I'm so glad we were there to see it.

So it was a pretty action packed weekend that for once didn't have a massive amount of mileage.  What it lacked in miles it made up for in intensity I suppose.  This coming weekend will be a whole different story as we're heading to Mont Tremblant to put in some serious time in the saddle.  Bring it on.  For now, lets look at this past week...

Monday:  OFF - triathlon race season is officially over so I skipped swimming
Tuesday:  33km with Morning Glory, followed by a 40 minute weight workout.  12km run in the pm.  Legs were pretty tired by the end of the day
Wednesday:  1700m swim.  I was seriously disinterested in this workout.  I feel like I need a mental break from swimming right now.  Our coach has us doing distance all the time.  I never thought I'd say this but give me some hard 100's for a change, ha ha.
Thursday:  6km run.  I was going to ride with Morning Glory but opted to run instead.  I do have a half marathon coming up so I should probably get some more run mileage in my legs. Went for a massage after.  Best thing ever.
Friday:  OFF
Saturday:  60km of Muskoka's finest hills on the bike
Sunday:  5 hours on my feet, followed by 11km of more of Muskoka's finest hills in my running shoes.

I am going to be elaborating on this whole Training Stress Score thing later on this week so stay tuned for that.

Posted by Phaedra Kennedy at 12:09 PM

I have been trying to volunteer at a MSC race all year, but the timing has never worked out. I'd love to bike marshal a race like Emma did this past year, that sounds like serious fun. Glad you were able to cheer on your friends and have an enjoyable weekend as well. Have fun in Tremblant.

Wow mountain woman you are killing it!
Queen of the mountain for sure.