Disclaimer:  I was provided a pair of Fresh Foam Zantes in exchange for an honest review.  I did not receive any other compensation.  All opinions are my own.

I run with music all the time.  The only exception is when I'm racing in a triathlon as it's not allowed.   Music definitely fuels my workouts.   99.9% of the music on my running playlists is faster paced music.  Since I'm working on my running cadence, I find music with a faster beat helps me keep my turnover quick, which is the goal these days.  Music helps to keep me focused and it picks me up when I'm starting to fade.  There's something about hearing my favourite songs during a run that really gets me going.   I've got current favourite playlist that I've been listening to on a regular basis.  I've put a sampler of it on Spotify - you can check it out here.  Which leads me to the CONTEST part of this post.  Who doesn't love a good contest?

New Balanced has partnered with Spotify and they want to hear what music fuels your workout.  They want to know how you #RunToAFasterBeat.  The grand prize is a trip for two to a music festival of your choice and $1000 in New Balance gear (ahhh!!!).  There are two ways to enter:

1.  Head on over to freshfoamzante.ca and submit a 5+ song playlist through the Spotify plugin
2.  If you're already a Spotify user, log in and submit an existing playlist that meets the above listed requirements.


Now on to the shoe!

It's been a while since I've run in New Balance and can I just say WOW, I'm really impressed with this shoe.

First Impressions:
When I took the shoe out of the box, I was amazed at how light it was.  It weighs nothing (7.6 oz to be exact).  It's easily one of the lightest shoes I've tried.   The colour way I tested was the grey and pink.  I prefer a brightly coloured shoe so I'm not a huge fan of this colour combo but, New Balance does have that base covered as there is an awesome purple, blue and green combo in the Fresh Foam Zante line. 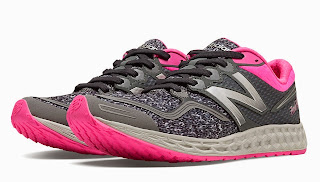 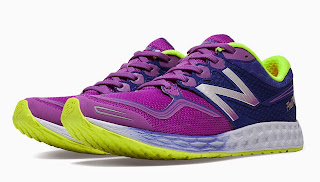 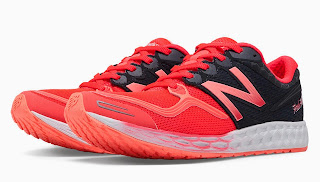 These shoes fit like a wonderfully snug slipper.   They hug your foot without being restrictive.  The heel counter is a bit lower cut than other shoes which I quite like even though I wear orthotics, which pushes my foot up a bit higher in the shoe.  My foot was still held quite snugly in the shoe despite the orthotic and low heel counter combo.  It never felt like it was going to slip out.   The upper has a molded sock liner and no sew material application which means there is nothing in the shoe that will rub on your foot in anyway.  I could easily run sockless in these (triathletes take note!!)

From the New Balance Canada website:  Sleek, snug and dialed in for speed, Fresh Foam Zante has a bootie-like design that wraps the foot like a second skin. Designed from data gathered from fast runners, it has an aggressive toe spring that delivers a quick, incredibly smooth heel to toe transition.

I did my first run in these the Tuesday after my 10km race.  I thought my legs would be recovered but boy was I wrong.  The sluggishness of my legs did nothing to dampen the springy feel of the shoes.  I tackled a nice easy 7.5km. Because of the name I think I expected a cushier, maybe even mushier ride.  I was pleasantly surprised by the responsiveness of the ride.  Because it's so light, the shoe feels very minimal.  It's almost like running in bare feet but with memory foam strapped to the bottom of your feet for protection.   I went out again on Wednesday for 3.5km.  I wanted to go longer but I cut it short due to the kamikaze gnats that are out in full force right now).    On Thursday morning I did a brick so I rode for an hour then immediately laced up the Fresh Foam Zantes and went out for a 6.5km run.  My legs always feel horrible in my first few bricks of the season but I have to say, the spring in these shoes made up for what my legs were lacking.   I did another brick on Saturday and I was positively flying in these shoes.  Yes, I'm pretty impressed with these kicks.  They are going to be well used this summer.  Nice work New Balance!

Who else has tried the Fresh Foam Zantes?  What do you think?  Don't forget to check out the contest at freshfoamzante.ca

Posted by Phaedra Kennedy at 11:17 AM

Sweet! I love the way the Zantes look and was wondering what you'd think about them. Sounds like such a great shoe!

Honestly...these bugs need to go. They are ALL over the place and fly into my mouth and eyeballs.

OOOOH I love the colours!

I have not tried these yet. I was on a shoe binge about a year ago and have more than I need. However, I may be looking to replace closer to fall. I've seen these advertised and have been intrigued - I need higher cushion neutral shoes.

Totally agree with your review. I also wear orthotics and didn't find it compromised the fit. They are like wearing slippers...so comfy! I like the grey though, I'm more into bland colours :)