Monday.  You are always such a slap in the face.  Especially after a most excellent weekend.  The sun was shining, it was finally HOT and I got my first bad tan lines of the season (yay for perma shorts!).  I could have easily kept that party going but alas, I'm not independently wealthy so I have to work now so I can play later.

I had the Mississauga 10km scheduled on Saturday even so that meant I had to get my race kit on Friday night.  I ducked out of work a bit early so I could get over to Port Credit.  Made my way in and out of the expo fairly quickly even with a stop at the Burnbrae Farms booth.   I grabbed my swag bag and headed home.  The folks at the Mississauga Marathon know how to do a swag bag right.  Look at all the goodies! 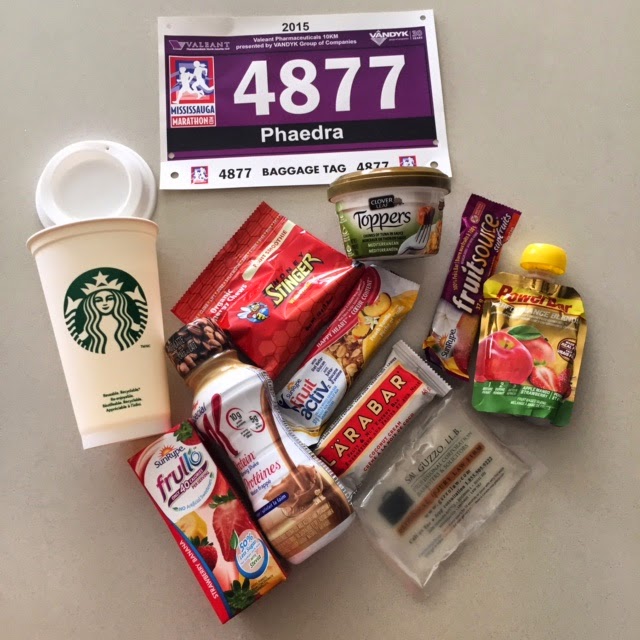 I was exhausted so I hit the sack early.  We had planned on a 3 hour ride for Saturday so we were up and out the door by 7:30 to meet the gang for 8:30 am in Inglewood.  We couldn't have asked for a better day.  My legs felt pretty crappy but the fabulous weather and company more than made up for it.  We ended up riding 75km which was more than enough for me.


We got home and I showered, stretched and had a bit of a nap.  My legs felt heavy.  I also wasn't sure what to eat so I had some scrambled eggs mid afternoon and then just before we left for the race, I had a scoop of protein powder with some almond milk.  I figured I needed something in my stomach.  G dropped me off at the start of the race, I did a warm up, took a gel, fought my way through the crowd to get to as close to the front as possible and then we were off.  I'll save the full race report for another day because there is a good story in it.  But suffice to say, even though my legs didn't feel great I still managed to pull off a sub 41 minute 10km and I ended up as second place female overall. Pretty pumped about that.   Of course this is how I celebrated. 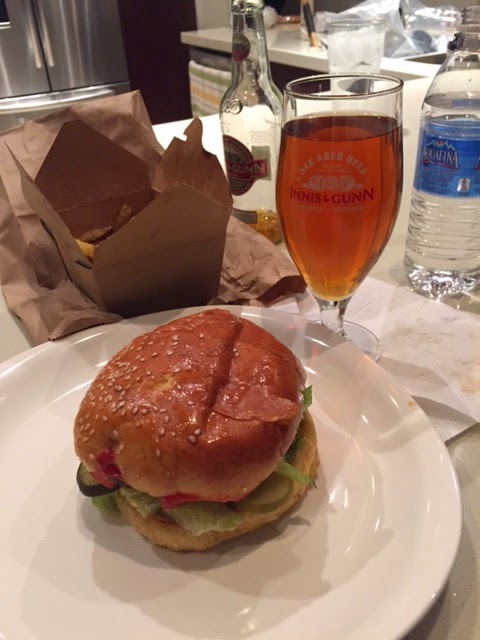 Sunday I got up early, skipped my swim and hopped on my new road bike to ride out to the Mississauga Marathon race course so I could cheer on some of my friends and a couple of my athletes.  Nicole was running the half AFTER running a 15km "warm up" (coach's orders) and Mike was doing his first marathon.  I found Nicole and Sam just before the 16km mark.  Both of them were smiling and happy, which was awesome to see.  I saw my friend Kiki as well who decided to race last minute.  Gotta love her.  After I saw that crew, I got back on my bike and rode out to Clarkson & Lakeshore to about the 22km mark of the marathon.  I was hoping I'd see Mike here but then figured it might be better for me to go further down the road so I doubled back and rode into the subdivision that was part of the route.  I saw the men's leader who had a huge lead on the second place guy.  I then saw Emma who was the bike marshal for the 3rd place guy.   I rode along and eventually came to the aid station just north of the 28km mark.  I sat here and waited for Mike.  I didn't have to wait too long.  He came motoring along.  I took a picture and let Caitlin, his fiance, know that I just saw him.  I sat there for bit longer and then decided to ride down and see if I could find Mike.  I found him again just before the 25km mark and I rode with him for a while.  He hit the turnaround so I turned around and stuck with him on and off along here.  He went into the little park and I rode up Clarkson to my original position at the aid station.  I waited here for him.  As soon as I saw him I could see he was struggling a bit.  I kept him company all through the subdivision.  He had to stop and walk a bit so I rode ahead.  I kept Caitlin in the loop with texts every so often.  I stuck with Mike from 30km almost right to the finish.  He had a tough go of it but he finished and I'm really proud and happy for him. 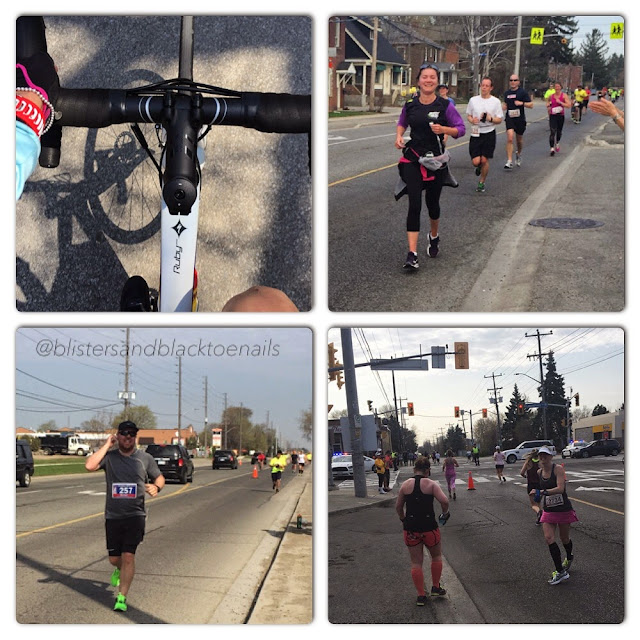 So this weekend was a BIG one.  As was my week for the most part.  I think I pushed myself a bit too hard this past week so I'm going to take a recovery week this week.  No high intensity anything.  I have a massage scheduled on Thursday night that can't come soon enough.  This is how my week went down:

I keep having grand plans of getting out and doing a long run of 19km but I haven't been able to make that work yet.  I"d like to get at least one 21km run under my belt before race day.  And I need to start getting more bricks in.  Even if it's just 10 minutes off the bike.

How was your weekend?  Who else raced?

I hope I'm laughing in the photo. I can see that Sam is, and they way I look, I hope I'm not running that way! So great to see you on course and SO MUCH fun to cheer you through the 10k end! Can't wait for your race report.

Nice to see you this weekend! Congrats again on a great race on Saturday.

Fun fact - the guy I was leading who was in third for the marathon when you passed us? he ended up winning the race! Dude was in the ZONE. He was entirely too cheerful when he moved up into third and then second. Crazy stuff!

I had a busy weekend too--between my race yesterday and my son's rugby matches, oh and I worked too--I'm exhausted. Taking a recovery week myself.

What a busy weekend! Congrats on your AG! :D

Nice race! Smokin fast...I need to work on my run speed. What bike do you have? I suffer from #bikelove and keep adding to my collection.