Pump Up the Volume: #Mingsanity Week 10

As I mentioned last week, this weeks workouts started with a warning from my Coach: "This is going to be tough, just plow through it".   It wasn't really what I wanted to hear but hard weeks are part of the program.  Without them, you can't grow as an athlete.  Knowing it was going to be a tough one, I had a deep tissue massage on Sunday.  And then a Graston treatment on Tuesday morning.  I think that might have been a bit too much for my poor little legs but, it did help them feel a lot better once I finally recovered from it all (which was Wednesday btw).  I didn't have any knee pain Monday through to Thursday.  My treadmill run on Thursday seemed to have aggravated something and my knee pain was back by EOD Thursday.  However, it was mild compared to what it used to be.  Perhaps because I am acutely aware of any pain I feel in my knees now, who knows.

On to the fun part of this post:  what I actually got up to this week.  It was a big one folks.  As usual I'm linking up with the #Bestfoot gang:  Krysten, Erica and Amanda.  Follow along as we put our Bestfoot forward this week.  Let's get down to it....

Monday:  Impromptu day off:  My massage left me feeling quite tired and I was really sore so I slept in.
Tuesday:  a.m. 10km run with 8km at tempo pace.  Didn't happen.  I ran, but it turned into a "do what you can" run because my legs hadn't recovered from my massage yet.  I followed that with a body weight circuit, which was also kind of sucky.  p.m:  90 minute boring as hell trainer ride.  Decided to use it to do a Game of Thrones recap.  Tested out a new saddle as well.  Jury is still out on that.
Wednesday:  2200m swim.
Thursday:  12km run with 5x1200m repeats @ 4:40.  Nailed it.  But I did have one weird knee pain moment, then everything was fine.  Followed that up with a body weight workout.  P.M.:  80 minute trainer ride.  Another snooze fest.
Friday:  2200m swim.
Saturday:  35.53km run followed by a weight workout.  Ran through High Park with my friend Stephanie.  I was so happy to have the company for a change.  I was supposed to run 10km at 4:20 pace but since it was such a hilly run, I opted to push the pace for the last 6km of my run.  I wanted to see what I could do on tired legs.  I actually felt like I could have gone longer. 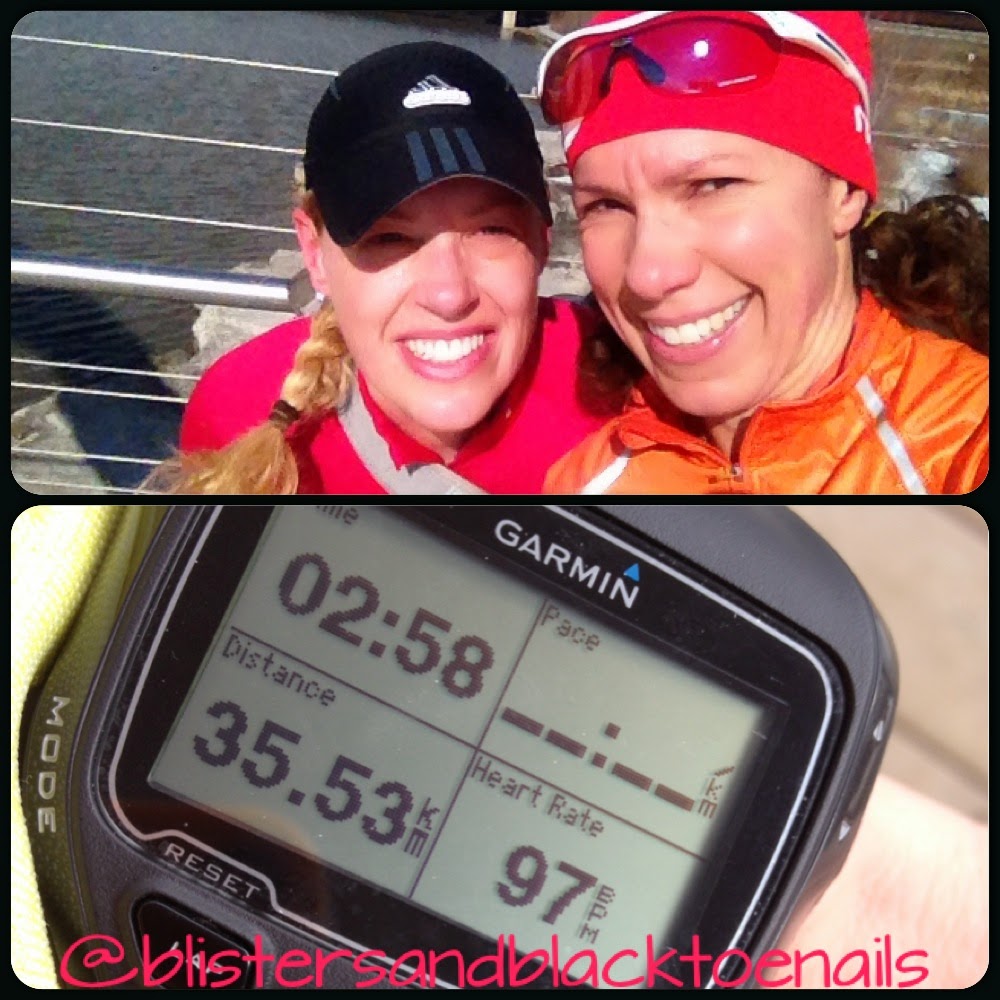 Sunday:  3200m swim followed by a 90 minute trainer ride with 2x30 min @ 120/140w.  Amazingly my legs felt alright.  They were a little sluggish at the start but once I got going they felt pretty good considering the beat down I put on them the day before.

Total time:  13h 27 minutes.  Good.  Lord.  I have to wonder what my peak weeks will look like once I really get into the "meat" of my 70.3 training.  Granted I won't be doing 35km long runs but I suspect that time will be replaced by time in the saddle.

Work is going to be a bit nutty this week so I'm not sure what I'll be able to get done especially since we're shooting overnight on Tuesday which means I won't be swimming on Wednesday morning.  Unless I don't bother going to bed but that's sooo not going to happen.  So we'll see how I manage to fare this week.

How was your week of workouts?

Posted by Phaedra Kennedy at 8:19 AM

You are a beast! Work your bad self out lady!

My week was good. Slowly picking up time and intensity in my training.

WOW, I'm exhausted just reading this! lol. But you rocked it and that is motivating to me! Keep up the great work!

My week was ok, but now that I am focused, I started my 13.1 training today. Wish me luck!

You are a running machine. That is a lot of distance to cover in one week - and then you add in the swim and bike. Animal!

Geeeez woman. I don't know how you do that much. Seriously. You must have to eat like 10 times a day! I can't wait for the day when I run 25km and can say "I felt like I could go longer"! Haha!! Teach me your ways!

My week hasn't been my favourite but I'm starting to finally get back into it now. With just over 6 weeks until my marathon, it's time to get my butt in gear!

Way to go, running coach! What an awesome achievement and new chapter in your life. I’m sure it will be a very rewarding. Boston strong – you are ready!! I hope to someday get there. Random (and you’ll probably be shocked as a running coach) – I did my first speed workout at the track yesterday and loved it! After being a runner for several years, how have I NEVER incorporated speed work!?!