I can't believe that our Europe trip is less than 3 months away!  We've finally finalized all our travel plans for our big European road trip.  Since we are flying in and out of Paris, we were hoping to spend some time in France other than in the airport.  Our original plan was to stay in the countryside, perhaps near Alp d'Huez but apparently there are a ton of races happening the week we're looking at staying there and a lot of the accommodation has been booked up already.  So, we went back to our original plan of visiting the south of France.  When we leave Italy, we'll drive along the coast and spend 4 days in Nice.  Ohhh la la.  I'm pretty sure a day trip to Monaco will happen while we're there.  From Nice, we're going to head to Grenoble and spend 2 nights there so we can drive to Alp d'Huez and ride up it.  I'm still freaking out about that descent although I think it will be much nicer on my fancy rental bike. 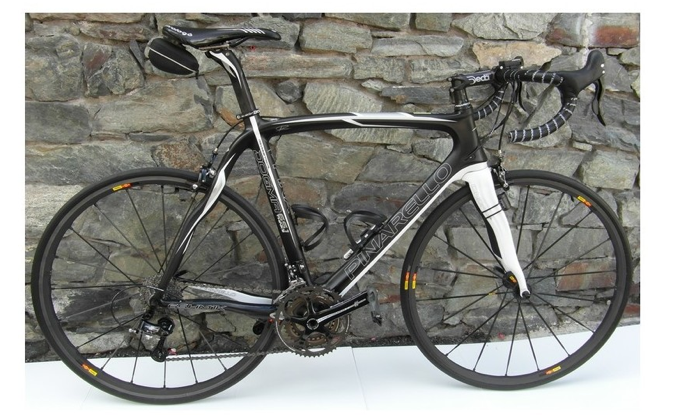 That, my friends is a Pinarello Dogma.  We had a few options to choose from and I went with that.  I wanted to ride something that I could never justify buying.  Here's hoping I don't crash it.

After our stay in Grenoble, it's off to Paris to spend one last night in France before heading home.  A bit of a whirlwind yes, but it's a whirlwind I'm looking forward to!

It seems like such a long way off but I know it will be here before I know it.  I'm already thinking about what to pack, ha ha.  I'm sure the list making will start in a couple of months.  Details details.

Speaking of details, it turns out there will be a few other details I'm going to have to figure out before we go.   Specifically when to eat breakfast on race day because apparently our race starts at 12:00 noon.  Yes, you read that right.  NOON.  WTH?  Although there is another area on the website that says it starts at 10:05 so who knows.  If it is noon, that's just insane.  Most 70.3 races start at 7:00-8:00 am.  Maybe as late as 10:00 am in some cases.  But NOON???  That opens up a whole other can of worms in terms of fueling.  I'm either going to have to eat a double breakfast or try to sleep in as late as possible (if I manage to sleep at all) and eat my pre-race meal later in the morning.  I'm sure I could try to practice this in training but that's going to make for a whole lot of late training rides which I'm not sure I'm too crazy about.

The good news is that this race has wave starts so I will be with all the other "old broads" in my AG.  Right now there are 34 women in my AG including me.   The wave starts run between noon and 1:30 pm.  So the finish line party will start once the last wave has gone off and will go until 7:30 pm when they close the race course.  If it's anything like the finish line party at IM Switzerland, it's going to be a blast.  Maybe they'll have a D.J. and Red Bull on the run course too!  After all of that there is the official finishers party as well. I definitely want to stick around for that.

Of course I've been doing as much online course recon as I possibly can.  Especially regarding the swim.   Thank goodness for Google Street view!  I now know what the river we're swimming in looks like.  I know exactly the area that we swim in and I have a decent idea as to what I can use for sighting.  That's the thing with destination races, especially ones that you don't have the opportunity to train on ahead of time.  If you're like me and want to be prepared for certain in things on race day, you need to try to do as much course recon as possible before race day.  Unless of course you're my husband who will pretty much race anything, anytime.

This is the river we will be swimming in.  It's quite pretty!  And that's the bridge that I *should* be able to use to help me sight.  In fact, in some of the other aerial shots I saw, I think I've figured out where transition will be etc.  So exciting!! Clearly the swim is what I am most preoccupied with as it is the thing I am least comfortable with.  I'm dealing with some "issues" regarding this leg of the race that will probably end up in a separate post on another day.   At least I have a few months to try and get my head sorted out.  Buckle up friends because that's going to be a FUN ride!


Anyone have any recos for places to go, things to do while in any of these places?  Other than drink lots of wine and tour vineyards, ha ha.

Posted by Phaedra Kennedy at 1:44 PM

Sounds amazing! Are you nervous about riding an unfamiliar bike?

Not really, although the components are a different system than what I normally ride - this is Campy and I normally ride Shimano so the shifting is different. I've ridden Campy before so it's not totally foreign to me but it will take me some getting used to. I'm most nervous about the descent DOWN the Alp - lots of steep hair pin turns. Totally freaks me out.

Yay for being amazing!!