Yesterday G and I opted to dice up our normal Saturday training routine.   We have two places we normally go and ride;  out in Bolton and then out at Lake Wilcox in Richmond Hill.  Yesterday we went to Caledon, which, if we're going to get nit picky, is not that far from Bolton.   However, we normally just get on our bikes and go.  Sometimes we'll do a short run after the ride.   Yesterday we decided to throw an open water swim in there as well.  Both of us need the practice and short of swimming in Lake Ontario (which is kinda gross), there isn't really too much opportunity to get much open water swim training done when you're in the city.  So to find out that there was this amazing little spot in Caledon, which is about a 40 minute drive for us, made us both pretty happy.

The swim course is set up in an old quarry.  They open the gates at 7:00 am and it goes until 8:30 so if you're there right at the start and stay until the end, you can get a lot of swimming done.   There were a lot of folks out and I'd say 99.9% of them were triathletes.  There are buoys set up that mark a 1030m loop.  There are 2 other green buoys a little further out that mark a 1300m loop.  You can see the shore at all times, which always makes me feel better, even though I know how to swim.  The water had a slightly green-ish tinge to it which is apparently normal for quarries.  It was the perfect temperature too.  A little chilly when I first got in but once I got going, it was perfect.  I swam one loop in just over 18 minutes.  I wasn't sure if I was going to do a second loop as my shoulders were feeling tired.  I wandered back to shore and then saw G who said he was going to do another lap so I said I'd probably do another partial lap so I followed him out.  My partial lap turned out to be another 1000m because I can't really swim straight.  I could really feel the fatigue setting in in my shoulders.  They are incredibly tight right now and when you don't swim in a wetsuit very often, that extra resistance really makes a difference.  I started to feel sloppy as I made my way towards the shore.  I swam into shore, stood up, stretched and watched for G.  He came in and said he was going to do another lap (!?!?)  Crazy man.  I opted to go back out and swim along the roped off area on the beach.  As soon as I started swimming my shoulders said um, no more please.  But me being the hard head that I am, I kept going and swam out to the first buoy and turned around.  That gave me another 300m for a total of 2310m in just under 40 minutes.  2 years ago that same distance would have taken me at least 45 minutes.  So I was pretty pleased with that.
After the swim we packed everything up and drove about 15 minutes to a nearby community centre.  Many of the folks that had been swimming at the quarry were there.  It had started to get really hot.  I grabbed my Team Running Free tri top as an after thought.  I put it on without much of a struggle which made me a little suspicious.  It was also waaayyy longer than normal.  Hmmm...I quickly realized that I had somehow grabbed G's top instead of mine.  Ha ha ha.  It still fit kinda tight, just not as tight as it should.  Oh well.   We hopped on our bikes and headed out.  We planned on riding between 2-3 hours.  I figured it would be a hilly ride but thankfully it wasn't too bad.  I wasn't sure if my legs would be able to take 2-3 hours of climbing, especially in the heat.  My legs are in desperate need of a massage (scheduled for tomorrow!) so I just wanted to survive this weekend without totally killing myself.  It was a lovely ride that took us into the town of Glen Williams and through farm country.  I'd definitely ride that route again.  About 1:45 in I started to get uncomfortable.  I can't seem to find a good position on my bike when I ride longer than 90 minutes.  The constant pressure on my girlie bits is not nice.  I definitely need a new saddle and I think I probably need to be re-fit on my bike.   G could tell that the Crank Factor was setting in so we started to make our way back to the Community Centre.  Both of us were sweating buckets by the time we got back.  We logged just over 62km in 2:14 and I happily managed to keep my heart rate in zone 2.

G decided he wasn't going to do a run but I figured I might as well so I laced up the Yellow Birds and hit the pavement.  Nothing like doing a run at high noon on a insanely hot and humid day.  My legs felt like tree trunks.  I figured I'd keep it short, somewhere between 10 and 15 minutes.  After about 5 minutes I figured I'd probably only run for about 10 minutes.  I wasn't feeling it at all.  I was ready to turn around and walk back to the car.  But I didn't.  Homey don't play that.  Once I set out to do something, I usually suck it up and do it no matter how much I may not want to.  Instead,  I ran a whopping 2.52 km for the win. 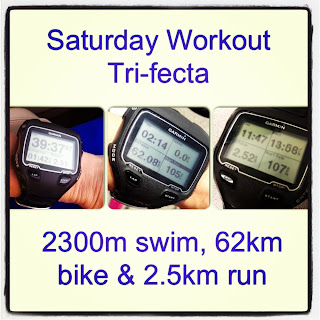 Not a bad way to spend a Saturday morning.   Needless to say I was pretty tired by the time 4:00 pm rolled around.  Add to that a frosty Innis & Gunn Rum Finish beer and it was pretty much nap time.  I had a hard time keeping my eyes open while watching The Tour.

All of that activity made for some very heavy legs this morning.  Which wasn't necessarily a bad thing as it forced me to run slower than normal.  As I mentioned in yesterday's post, I'm trying to keep my heart rate below 145.  I had a couple of points during the run where I got a little carried away and I hit the low 150's.  I could feel the difference in my breathing and I didn't even have to look at my Garmin to tell me that I was over 145.  Even though my legs didn't feel great, I still managed to keep a decent pace.  Once again I ran for time instead of distance.  The goal was to run for 90 minutes.  I covered 17.20 km in 1:31:15 for an average pace of 5:18 km's.  The best part?  My average heart rate for the run was only 140 bpm. Do you train on the same routes or do you change it up?  I have to admit, I'm a creature of habit.  I do all my long runs on the same path.

Posted by Phaedra Kennedy at 3:32 PM

I used to swim in the quarry with the C3 guys, but it then became too far to travel to every weekend. Good setup, though. Way to kill it Phaedra!

I used to swim at the quarry last year with the C3 guys, training for my IM. Now I just find the travel time is too much, so I just go to Wilcox instead. Way to kill it, Phaedra!

Nice work!! I need to start paying more attention to my heart rate.