I don't know about you but I love me a good smoothie.  I'm actually kind of addicted to them.  I have one pretty much every day, post workout.  Sometimes I have them in place of a meal if I'm pressed for time but most of the time they end up being a snack.  I've made them with everything from bananas and strawberries, to avocados, spinach & cocoa powder (don't knock it till you try it!).   In fact, I usually use my smoothies as a way to get some extra veggies in.  Pretty much every smoothie I make has a large handful of spinach in it, or if I happen to have it, some Greens Plus.  I like using spinach because it blends well.  I've tried using kale with no success.  I don't like my smoothies to be chunky.  They're smoothies, not chunkies.

Given my obsession with pumpkin it was only natural that I decided to make a smoothie with it.  I've been doing a variation of this recipe for the last couple of years.  The addition of the espresso powder was inspired by Stuft Mama's pumpkin mocha smoothie.  I gotta say, it rounds out the flavour nicely!

Put all the items in a blender pitcher with a bit of ice.  Blend up and enjoy! 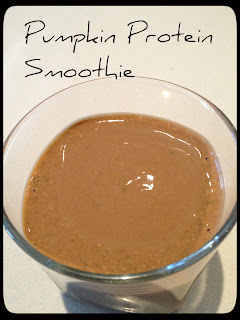 Next Monday I'll be wrapping up my ode to the glorious orange gourd!


Posted by Phaedra Kennedy at 7:08 AM