Once again I've been inspired by Pavement Runner and his post on race hardware.  I've done so many races I've lost count.  But there are several that will always stand out for me.  This list is a combination of sentimental favourites and the "just plain cool".  Without further adieu, here are my top 10.

10.  The Midsummer Night's Run 30km.  This was the first race I actually wore a "costume" for.  I ran 30km wearing a tutu and a "crown" of stars (it was really some kind of party decoration but whatever).  It was also the first race I ran at night.  I love the detail on the medal.  It ties in so well with the Shakspearean theme of the race.  (race report) 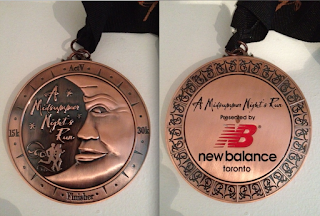 9.  Run the Runway 5km.  This race was held on one of the runways at Toronto's busiest airport, Pearson International.  It was pretty cool to be out there running while planes were taking off and landing a few runways away.  This was also a PB and an overall women's win for me. (race report) 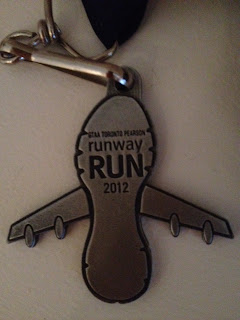 8.  The Toronto Women's Half Marathon:  2011 & 2012.  These are the first medals I don't feel like an idiot wearing around days after the race!  Last year I did every race in the Toronto Women's Run series and I can't speak highly enough about this race series.  It's fun, the race swag is always great and the atmosphere is so laid back.  It's totally geared towards a woman's sensibility.  I've worn both of these necklaces many times and I always get compliments on them.  You know I'll be signing up for next year so I can add to my jewelry collection! (2011 report & 2012 report) 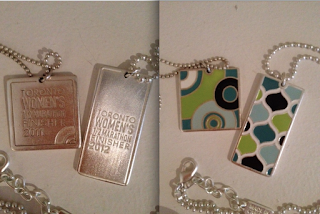 7.  Recharge with Milk Triathlon Series:  Cobourg Duathlon 2011.  There isn't anything special about the medal itself but it was my first ever overall race win, and it was completely unexpected so it makes it that much more special. (race report here) 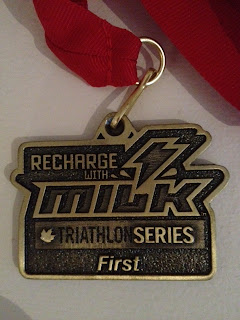 6.  Around the Bay 30km.  I've run this race several times and my goal has always been to get that elusive silver medal.  You are awarded different coloured medals based on your finishing time.  For women you have to break 2:30 to get a silver medal and 2:15 to get a gold medal.  This was my first big race this year so I wanted to be smart about it.  I paced myself really well and still had a lot left in the tank at the end to book it over the last 3km.  My final time was 2:17:17.  I got my silver medal and gained confidence in my ability to actually pace myself properly.  (race report here) 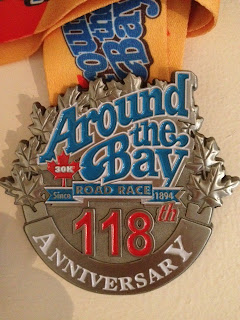 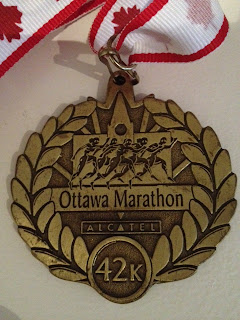 4.  Ironman Switzerland 2008.  This was my second Ironman and it was a stark contrast to my first one.  The day just went from bad to worse but I managed to finish and finish with a PB no less.  The best part of this day was the fact that there were a bunch of us racing.  8 of us made the trip to Zurich so it was a blast.  I raced with my best friend and my husband as well as a bunch of other friends.  It was also my first trip to Europe so that in itself overshadowed any negative experience I had on race day.  2 weeks in Europe with 8 friends and a big huge race in the middle...it doesn't get much better than that. (race report here) 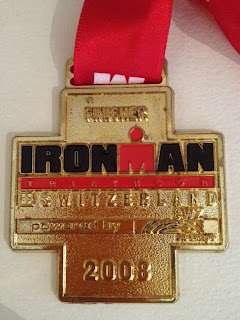 3.  The Vancouver Marathon 2001.  I  decided that I wanted to celebrate turning 30 by running a marathon so this is the race I chose.  I had never been to Vancouver but I had a friend that lived out there so I figured I might as well head out there and run this race.  Coincidentally it was the 30th anniversary of the race as well so the medal is the number 30.  Pretty cool momento. 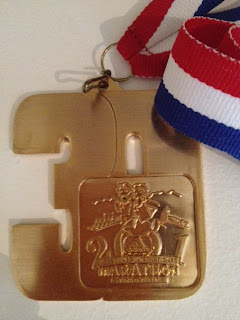 2.  The Boston Marathon 2003.   It was the best of times, it was the worst of times.  That was the title of my race report and I think it accurately sums up the day.  I caved big time, I wanted to quit & I cried a lot but I made it to the finish.  Whenever I look back on the day, I don't remember the pain I felt or the sunburn I got, I remember the crazy girls at Wellsley College, the line of revving Harleys in the Newton Hills & the drunk frat boy that ran with me up Heartbreak Hill.  Those things made it the best of times.  Boston may have broken me that year but I look forward to going back next year to hopefully set the record straight. 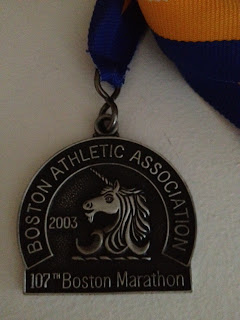 1.  Ironman Lake Placid 2006.  My first Ironman and hands down the best of day of my life aside from my wedding day.  10 months of training with my husband and a couple of friends culminated in the most fun I've ever had racing.  Our families and several of our friends came out to cheer us on and they positioned themselves at various places along the course so it was always a bit of a surprise to see them.  It was kinda like playing Where's Waldo.  Every time I saw them there was a lot of cheering and high fives.  I'm pretty sure I was smiling from start to finish.  After I finished freaking out about the swim of course.   The best part of the day was my husband giving me my finishers medal.  (race report here) 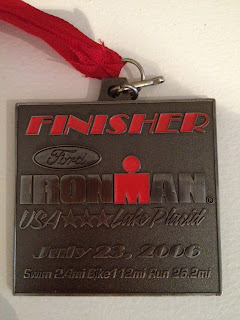 This is now where all of my medals rest, with the exception of the two that I actually wear.  I think I'm going to need a new vase pretty soon.  Either that or another way of displaying them. 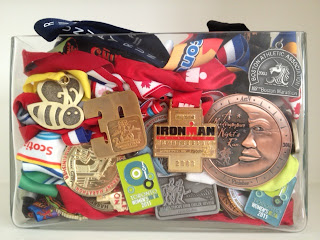 What are your favourite race medals and why?  Is it the medal itself or the memory of the race?


How do you display your race bling?

Posted by Phaedra Kennedy at 1:47 PM

Love the display vase. I'm sooo going to do that! You should pin that on Pinterest. HAHA - darn social media.

I can't take credit for that one. One of the girls from my run club told me that's how she displays her medals. But I think I WILL pin that on Pinterest!! ha ha ha.

Some fantastic medals there. Well done! :-)