Back in the Saddle - Literally

Another weekend, another Monday.  I'm getting back into a little bit of a routine so that means my weekly recaps are back.  They'll definitely be much shorter than normal given it's the off season!  I still had a pretty action packed weekend though.  It's funny how much you can actually get up to when you're NOT training, ha ha.

Saturday I resumed my duties as a Mizuno Run Bird at the Toronto Women's 8km.  I had so much fun doing it at the half so I was really looking forward to this.   I was going to be posted at the 8km turnaround point with Michelle.  Her and I tag teamed for the half and we had a blast.  She's so lovely.  I picked her up at 7:30 am on Saturday and we made our way up to Sunnybrook Park.  It was pretty darn chilly and we were both a little under dressed but thankfully Mizuno came through with some warmer gear!  As we were making our way to the check in, I spotted a familiar figure.  As she got closer I said " Well Hello There!"  and it took her a minute then she realized who I was.  It was Sasha Gollish - Pan Am Games Bronze Medalist.  Her and I have been following each other on Social Media for a while and we have a bunch of mutual friends.  This was the first time we met in person and she's just as nice in real life as she is online.  I got a HUGE hug from her and we chatted away for a bit.  She runs for Oiselle now and was wearing their new racing kit.   I wasn't sure if she was racing the 5km or the 8km but I brought my camera out on the course to snap some pics.  Turns out she was racing the 8km and she crushed it.  She ran it in 27 minutes and change.  SO FREAKING AMAZING.  Yes, she won. 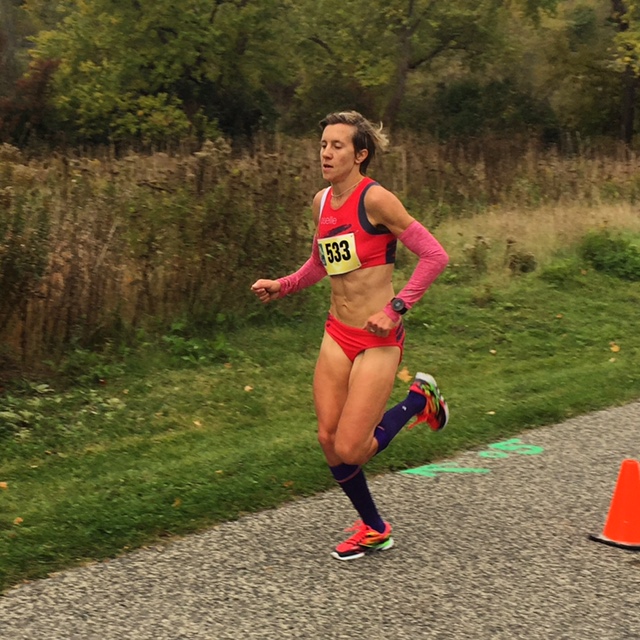 I ran back and forth and cheered ladies on.  I was standing near the turnaround, cheering when I spotted someone that looked familiar.  She called out my name and then I realized who it was.  It was Jaqueline.  I ran with her at the Women's Half and then she emailed me to thank me.  I jumped up and down and gave her a big hug and then ran with her for a couple of km.  She's going to be tackling her first marathon next year and has enlisted my help.  I'm so excited to work with her!  Of course I had to snap this. 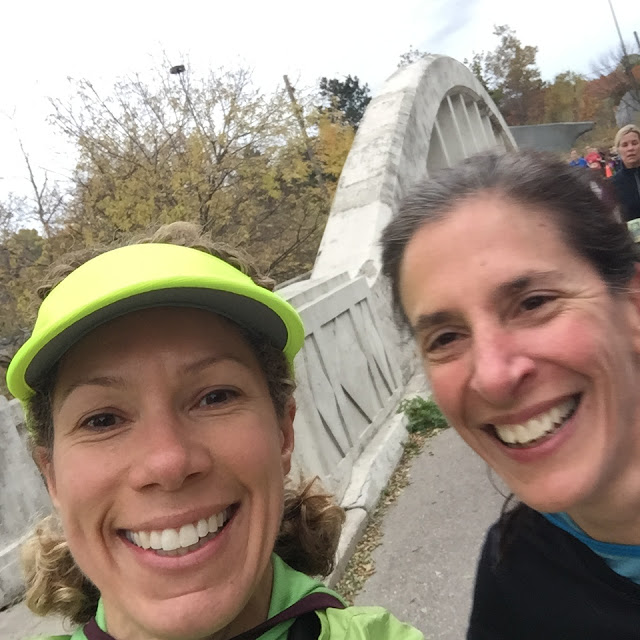 I hung around the turnaround for a while, waiting for the last participants to come through.  I was chatting with a volunteer when the last girl went by.  I caught up to her and told her I was going to keep her company.  She was so happy.  Her name was Kike and she was visiting from Nigeria.  She was walking the 8km.  She said when she knew she was coming to Toronto she looked up some events and picked this one.  So her and I walked and chatted, we met up with Robyn and Krysten at the 6km mark.  I had told Kike that she'd finish with a posse and that she did.  We picked up Michelle at the 400m to go mark and we all walked in with Kike, cheering and laughing.  What a great morning. 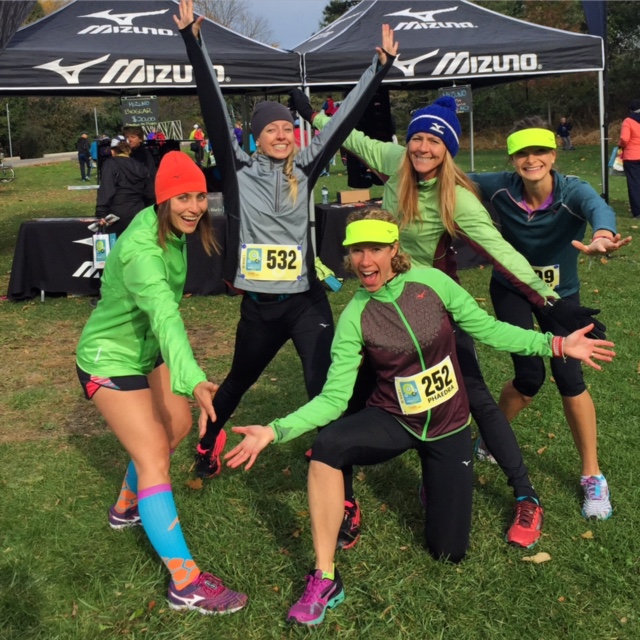 Saturday afternoon was fairly low key.  We did some grocery shopping and I had some good couch time.  My back has been bothering me as of late so I spent some time with my feet up and the heating pad on.

Sunday morning I was up early-ish again as G was doing his first cross race of the season out in Rockton.  We loaded up the car with his fancy new bike and new wheels (that I will get to use at some point - woohoo!) and headed out.  It was a lovely day, albeit it a bit windy and a bit cool but I was dressed for it.  I brought 4 cowbells and ran around the course cheering and taking pictures.  The course was actually fairly flat but there were a lot of twists and turns.  There were a few spots where you could get some good speed.  I think next year I may give this race a go.  I need some more time to get comfortable with my bike handling skills, ha ha.  But it does look like fun. 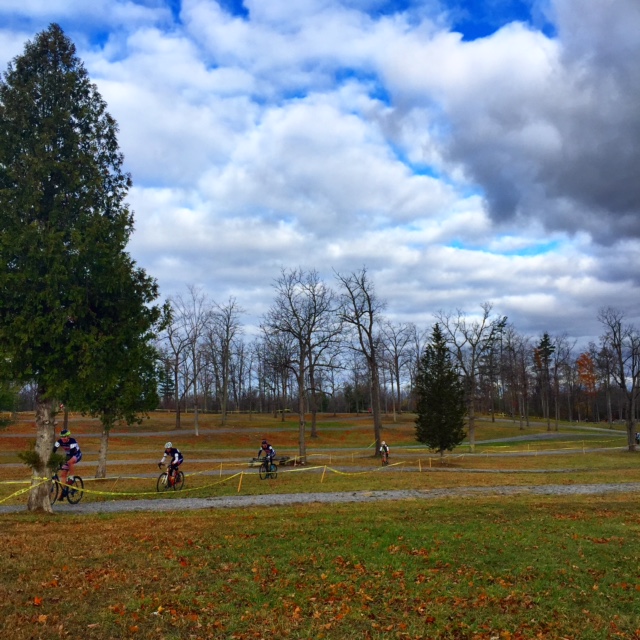 Sunday afternoon was spent prepping some food and then I made my way down stairs to the Pain Cave.  It's always a sad day when you do that first trainer ride.  I got back on Tom Sawyer.  I need to get my fit tweaked a bit so I thought it was high time I get back in the saddle to see what I want changed. 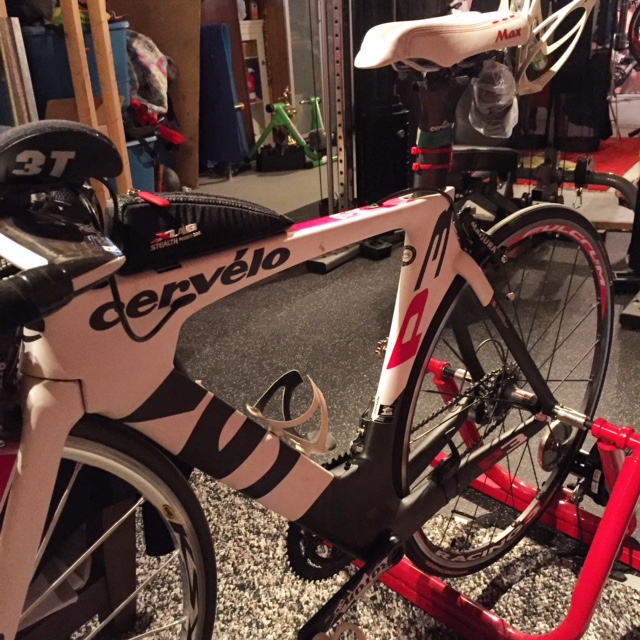 I'm not sure this was the best idea given the situation with my back.  I rode for just over an hour and by the time I finished my back was sore and tight.  I'm not sure what is going on but it's been like this for at least a month.  I thought it was just tight muscles but now I'm not so sure.  I'm going to make an appointment to see my chiro this week.  I'm really hoping it's nothing serious.

My activity this week was fairly limited.  After Scotia my Garmin told me I'd need 68 hours to recover, which is about right.  It usually takes me 2 days after a half marathon before I feel better.  Although I was quite surprised at how good my legs actually felt.  They were a bit sore on Monday but by Tuesday evening, they were totally fine.  I almost wanted to go out and run.  But I didn't.

5 hours and 15 minutes of activity.  Not a bad way to ease back into things.   My goal is to keep things easy to moderate and hit between 7-10 hours a week for the next couple of months.  Of course it will all depend on what my back lets me do.

How was your weekend?  Who else is enjoying their off season??

Posted by Phaedra Kennedy at 10:06 AM