#STWM Number 6 and a Recipe

In just under 4 weeks, I will be toeing the line to run my 6th Scotiabank Half Marathon.  I've seen pretty much every incarnation of the course as the first one I ran was way back in 2001.  I ran it again 5 years later, in 2006.  I took a hiatus from running and then came back in 2011 to try to break 1:40.  Did that, ran it again in 2012 as part of my last long run leading up to the New York Marathon and then it was the scene of my #sub130orbust half in 2013.  To say that I love this race would be an understatement.  It's grown so much in the last 15 years, it's amazing.   It's really become a world class running event.  The current route is my favourite.  The goal was to give participants a good tour of the city and I think they've succeeded in this.

I've been pretty lax with my training for this.  I don't even know if I should use the word training.  If you follow me on Strava, you'll see I've been spending more time on my bike than on my feet.  I've gotten a few quality long runs in, some shorter distance work on occasion during the week and the odd track and tempo workouts.  This will probably be the least prepared I've ever been for this race.  Normally I'd be really worried but if there's one thing I've learned this year, it's that just because I'm not running as much as normal, doesn't mean I can't run well, especially on a flat course.  I don't expect anything close to 2013's performance but I am hoping that I can land somewhere in the mid-1:30's.  I ran 21.3km yesterday just to see how my legs would feel and even though it was slow (for me) I felt alright.  Especially after coming off of a sinus infection and 10 days of no running.  I still have a few weeks to work on my speed so that's the plan for now.  I can thank the awesome gang at Burnbrae Farms for sponsoring me into the race this year and helping me fuel my training.

Speaking of fueling, I wanted to share a recipe for one of my go to pre-race / long run breakfasts:  Pumpkin Spice Protein Oatmeal!   Because it's almost fall and it's time for #allthepumpkin.  There's also a secret ingredient in it that makes it extra smooth and silky and gives you a boost of protein.  Yes, protein in oatmeal.  And it's not from what you'd expect.   Note:  The original recipe for this can be found in the Racing Weight cookbook.  The addition of egg whites was my two cents. 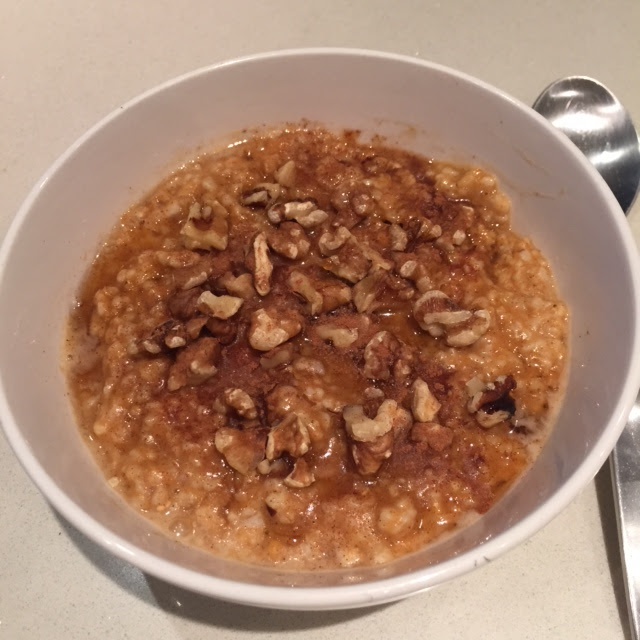 Cook steel cut oats according the package directions.   Once the oats are cooked, remove from heat and let them cool a bit.  Whisk in egg whites.   Add pumpkin and spice and mix in well.   Add maple syrup to taste and garnish with walnuts.  Enjoy!  Makes 2 very generous servings.

I find getting a bit of protein in with my carbs makes me feel fuller longer, thus the addition of the egg whites.   Not only is pumpkin tasty but it's rich in fiber, antioxidants and minerals.   I usually make this oatmeal the day before my long run or ride, put it in a container and store it in the fridge.  When I'm ready to eat it, I re-heat it in the microwave.  If it's a little lumpy, add some liquid (I usually use almond milk) and mix it in, then re-heat.

This tasty breakfast was what fueled my long run and my swim this past weekend.  After feeling like crap since last week and then coming down with a sinus infection, I had done nothing since last Sunday.  On Thursday I started to feel better (thank you antibiotics) so I went to the gym.  I really wanted to go for a run Thursday night but it was really hot and muggy and I didn't want to push things.   I was feeling a lot better by the weekend so I figured I'd test the legs, thus my 21.3 km run.   Despite being sick, I still got in a few good workouts.

I'm now feeling pretty much 100%.  Today is my last day on antibiotics - YAY!   I haven't had too many side effects other than a really bad headache that first day and some taste bud issues.  After I take them, usually a couple of hours later, all I taste is a chemical after taste.  Yuck.

I'm looking forward to getting back on the bike this week.   G and I are going to be riding 100km on Sunday for the 10th Annual Greg's Ride.   Hopefully it doesn't rain!   I also really need to get some speed work in for Scotia.  I've done a few good track workouts but nothing consistent.  Time to dial that in a bit.  Especially if I want to squeak into the 1:30's.

How was your week?   Are you a fan of pumpkin?

Posted by Phaedra Kennedy at 8:31 AM

I am a HUGE fan of pumpkin and must give this recipe a try. Minus the walnuts, of course! Breakfast is my favorite meal of the day and I'm always looking for new ideas.

That pumpkin oatmeal looks amazing. But I"m with Kristen, no walnuts (I prefer pecans). I'm also right there with you with more time on bike than feet recently. I don't have as good of running economy going into a stretch like that, though, so I would be hard pressed to run a sub-2 half right now. Good luck!

You are a FREAKING speed demon! Seriously!! You will rock Scotia I am sure!