Monday Schmonday.   I was having a fine weekend until you went and wrecked it.   I probably could have used today off.  I'm slowly recovering from a cold that snuck up on me Thursday afternoon.  I'm sure I didn't do myself any favours by spending 3 hours standing outside amongst 75,000 other people at Downsview Park to watch AC/DC but it was worth it.  They may be old but they can still rock. 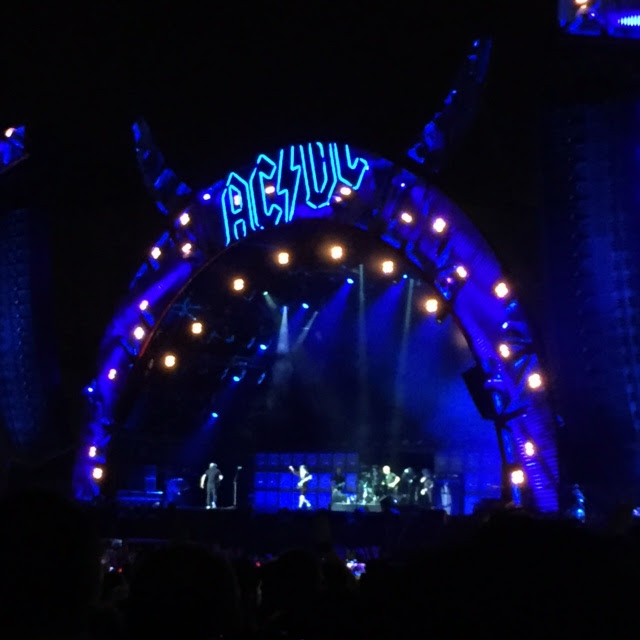 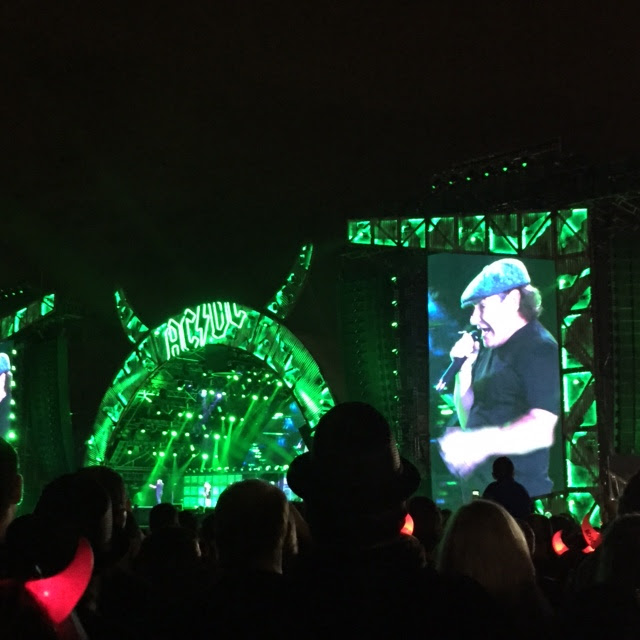 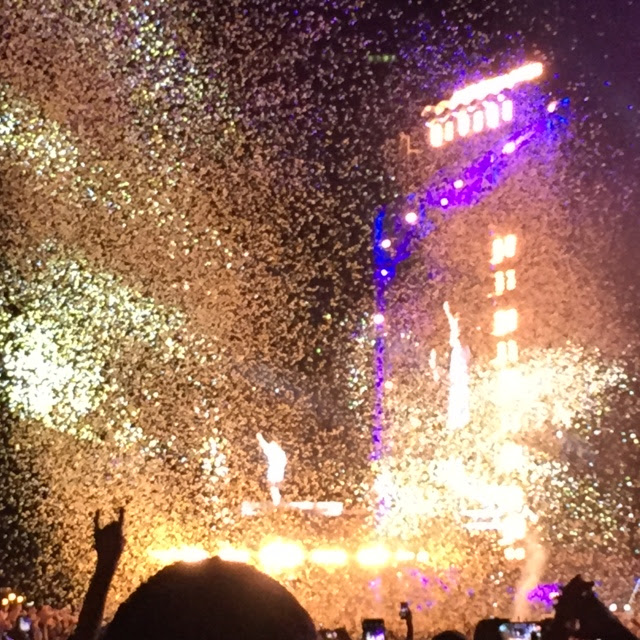 I do know that I'm too old to spend 3 hours standing around though.  And I really don't have the patience for large crowds.  Especially large crowds of drunk / stoned people.  So, that was my first and last concert at Downsview Park.  This old broad needs to be able to sit down during a show, ha ha.

Anyway, that cold knocked me sideways and I ended up sleeping in on Friday.  I left work a bit early and was in bed asleep by 8:30 on Friday night.  I had hoped to do a run on Saturday but was still feeling a bit rough so I spent the day on an organizational tear after popping an Advil Cold & Sinus.  I cleaned out all my dresser drawers, got rid of things I don't wear any more and cleaned out my closet as well.  I donated a large pile of clothes and have a few nice pieces that I'm going to hopefully sell at The Kind Exchange.   The next project I'm going to tackle will be my bathroom cabinet.  That's in need of some serious organization.  I also spent a few hours in the afternoon cooking.  This summer was so busy that meal prep time went right out the window.  Now that things are a bit quieter, I'm making an effort to cook more.   I felt a lot better by Saturday afternoon.  Not quite 100% but definitely better.  I hoped a good night sleep would put me at 100% because I was supposed to ride the Epic Tour of Halton 125km with the Double D's.

I didn't sleep well.   And it was pouring rain and cold.  But the boys promised pastries and good company.  And, I had paid almost $200 to do the ride so I was going.  I also wanted to finally nail the Strava Grand Fondo badge as I SO want to get my hands on the jersey they're offering.  It's really cool.

The boys arrived pastries in hand and we made our way out to Milton. 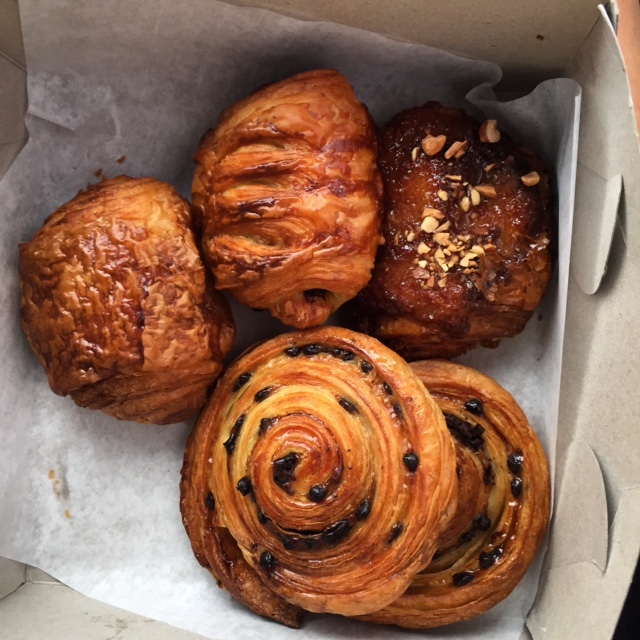 The rain started to get heavier as we went along.  David B was only going to ride about 60km with us as he had plans for the afternoon so he found a place to park that was just off of the route.  We followed him there and he hopped in the car with us and we made our way to the Kelso Quarry.  We had a bit of a late start and by the time we got ourselves sorted out and on the road, we had missed the start of our leg.  It didn't seem to matter as there were a ton of people on the road.  We just didn't have a pack to ride with.   My legs didn't feel amazing and my feet were cold and wet.  I neglected to bring booties with me.  It poured rain for the first hour and a bit and then the rain let up and became a slight drizzle.

While riding behind my buddy David L, I noticed what looked to be soap suds on his butt.  I got closer and realized I was right.  I started howling with laughter.  The wetter it got, the more soap suds appeared.  Obviously the chamois in his shorts didn't get rinsed out too well the last time they were washed.  Any downhill we hit, soap suds would fly off his butt and leave white splotches of suds on the road.  David B and I couldn't stop laughing.  It provided some welcome distraction from the crappy weather.   The sun tried to make an appearance but never actually managed to make it out completely.  The rain did stop for a while but the winds picked up.  Which made for a rather challenging ride.  Especially over all the hills.

We lost David B at around 60km and he the one was doing the majority of the work at the front of our little paceline so David L became the leader.   I was falling off the back on every single climb so the boys had to wait for me.  I was ok on the flats but the minute I started climbing up anything remotely steep, I was screwed.  My legs just said NOPE.  NO. WAY.    While I may have felt ok, I clearly wasn't recovered from my cold.   And this route had no shortage of climbs. 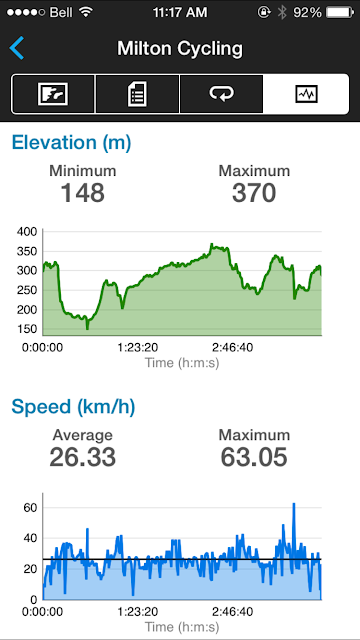 At about 85km in David said  "I don't want to be a whiner but my achilles is really bothering me so can we do the 110km route?"  He had been having issues with his achilles for a while, since before Ironman and I felt bad making him ride longer than was necessary just so I could get to 125km.  I really wanted to get that badge / jersey but I was also struggling and didn't think I'd actually make the 125km without having to get off my bike and walk.   The next course marker we came to pointed us in two different directions, one way for the 125km and another way for the 110km.  We turned down the 110km way.  David asked again if I was ok with it and I said yes.  I was tired and cold and was mentally starting to check out.  Sometimes things don't go the way you planned.  I had a feeling I should have just ridden the extra 5km when we were in Tremblant.  But hindsight is always 20/20 right?

I started to feel a bit better towards the end of the ride, maybe because I knew I was going to be getting off my bike, ha ha.   I was familiar with the roads we were on and I knew that we were going to have a pretty big climb to get back to the Quarry.  It was a climb I had done before and I really don't like it.  It's tough on a day where your legs feel good but when they don't, it's even tougher.  There were so many people walking up it, but David and I ground it out.  He passed me just before we got to the top.  I was happy to get to the car and get out of my cold wet clothes.  There was still one and half pastries left, which David and I devoured.  Thanks to the other David, he got us access to the V.I.P area so we got some real food and got to stand under a tent and out of the wind and rain.   We both wanted something salty so we stopped at McDonalds on our way home and each got some large fries.  So good.  Despite the crappy weather and my rather unhappy legs, I had fun.  I really enjoyed the company - the Double D's are great guys and the route is quite challenging.  It's definitely something I'd like to try riding again.  Sooner rather than later given that I really want that Grand Fondo badge, ha ha.

Thanks to that lovely cold, my goal to get back in the pool twice last week, didn't happen.  Nor did meeting my weekly running goal.  But what can you do.  Shit happens.  I still managed a decent week none the less.

This is how I ended my weekend.  Surprisingly, not a single beer was consumed this weekend either! 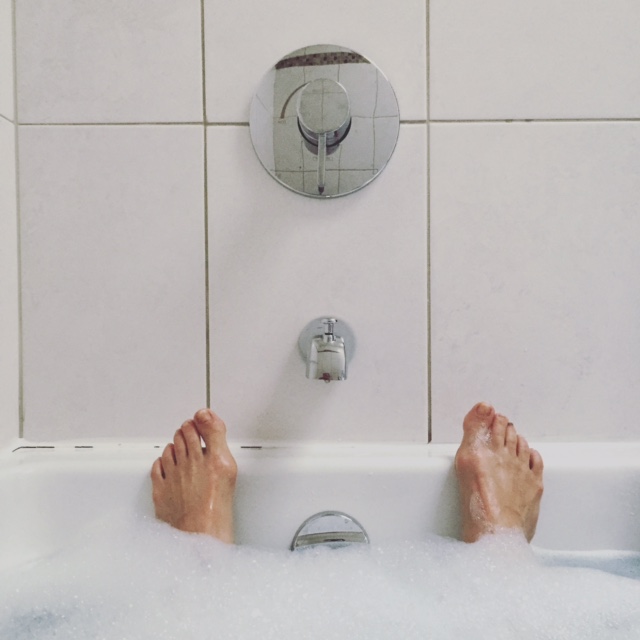 Here's hoping this week things can get back to normal.   I should probably look at starting to get some regular run training in since Scotia is only about 5 weeks away, ha ha.


How was your week?  Who's counting down to a fall race?

Climb up Appleby? Was the Gorilla there this year? Way to stick out 107k on that course yesterday; it wouldn't have been easy.

I don't recall seeing a Gorilla! Damn. I think it was Appleby that we climbed up. Bloody hell it was hard. So glad I have a million gears on my road bike.

Ah so I'm not the only one eyeing that Strava Granfondo kit! You've still got time (plus I think they'll offer the same one for a while, at least I'm hoping because I won't be able to do 120 until October...)

Nice ride! And nice bubble bath. I had two tub soaks this weekend - after a cyclocross race and then a sprint tri on back to back days. I'm not as high volume this time of year but I'm certainly getting in the intensity.