It's been a while since I've taken the time to sit down and write a "this is where things are at" kinda post.  So.  Here it is.  I feel like I am getting to a much better place physically and mentally.  When my back / sciatic issues started in May, I felt like I had just kind of dealt with one hurdle (my knees), only to have to deal with another.  It really did a number on my psyche.  I tried to remain positive and adjusted my training as needed (i.e didn't run).  I really still wanted to race though, so I raced through a fair bit of discomfort.  Whether that was smart or not remains to be seen.  I am finally starting to feel better and see some progress which is great considering it wasn't too long ago that I was feeling pretty crappy and unmotivated.  I really wanted the race season to be over.  Actually what I really wanted was a do-over.  I know I haven't trained the way I would have liked.  Instead I did what I could.  I am grateful that I was even able to do that.  But training while in discomfort takes the joy out of training, at least for me.  It took the joy out of my favourite thing (running) and replaced it with apathy.  I do feel that is changing, especially after having two really good runs this past week and an excellent track session last week.  The joy is starting to come back but I don't want to push it.  I have a couple more races on the docket for the year but after that I'm looking forward to taking some time off of running to work on other things.

I have a solid game plan for the off season that involves strength work and flexibility.  Two things I really need to work on before the 2016 race season starts.  Since I've stopped lifting heavy, my legs have lost a fair bit of power.  I really notice it when I'm climbing on the bike.  So that will be the first order of business.  Especially since I signed up for this on Monday. 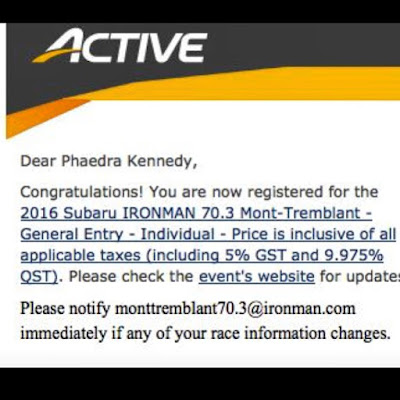 There are at least 7 of us that will be racing.  And a bunch of others on IG that have also committed to it.  I think it's going to be pretty freaking awesome.   I sat at my desk and counted down the minutes until noon when registration opened.  I had the page up and ready to go.  I texted G at noon and said GO!!!  I suspect that a whole bunch of other people were doing exactly the same thing.  The race sold out by 8:00 pm on Monday night!  G and I are headed to Tremblant on the Labour Day long weekend to check it out and put in some quality time in the saddle.   I have some lofty goals for next year so I'd like to know what I'm getting myself into.   I'm not going to spill them just yet...I'll save that for the end of the year.

I have been spending a LOT more time on the bike and I think that has helped keep me at a decent level of fitness.  I joined Morning Glory and try to ride with them twice a week.  I'm riding with mostly guys (and the odd REALLY fast girl) so I find that I'm working WAY harder than I would if I was on my own or even on the trainer.  In the 6 weeks that I've been riding with them, my bike handling skills have improved immensely.  I am no longer skittish in a pack and I have no problems drafting off someone's wheel.  I'm learning proper gearing and my descending skills are starting to improve.  I've also noticed that my speed on the flats has improved a lot as has my ability to accelerate quickly.   I never thought I'd say this but I will miss the 5:40 am rides over the winter!  I'm going to have to work extra hard in the Kennedy Compound Pain Cave this off season so I can come out guns a blazin' in 2016.

This new found joy in bike riding has prompted me to start buying #allthethings - I've become especially obsessed with fun cycling socks.  Of course they have to match your kit.  This is problem for me because all of the stuff I own is piece meal.  But I did buy a Morning Glory kit so when I get that I will proudly wear it.  Along with these awesome matching socks. 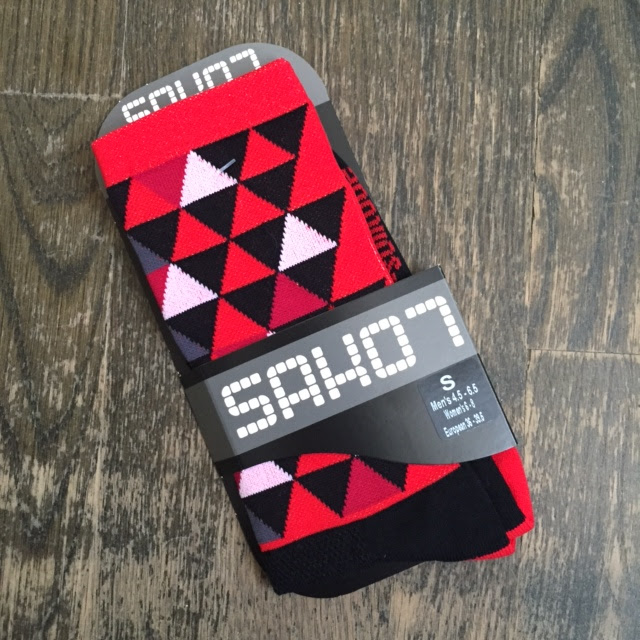 I'm currently trying to find a top that matches the blue in these socks.  Clearly I have a problem. 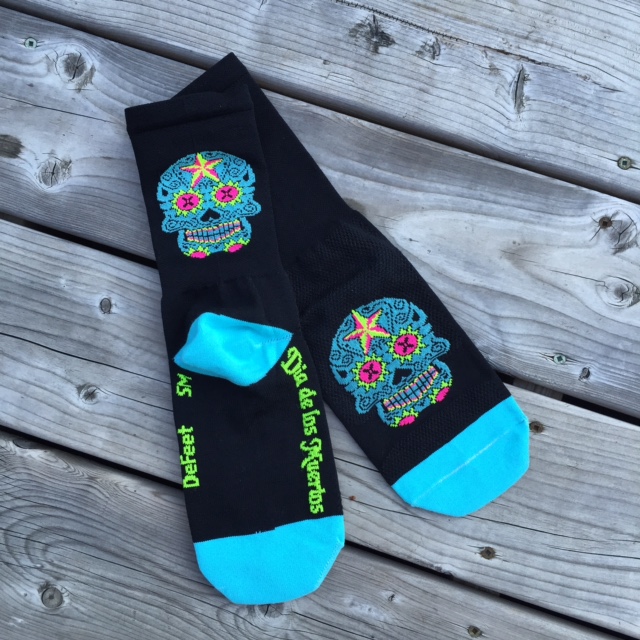 The other crazy thing that's happened is that I've ridden my road bike more than my tri bike in the last two months!  Even on our last couple of long rides, I've opted to ride my road bike.  Don't get me wrong, I still love Tom Sawyer but I feel like Snow Dog is helping me become a better rider.  That and tri bikes are generally frowned upon in group rides.  There have been a few that have been out but they usually stay at the back. Speaking of cycling, there is a new indoor training facility coming to the west end.  It's called Watts Up Cycling.  It's a computrainer studio much like the one RPM had.  RPM opted to remove the computrainers and use that space for something else, which really opened the door for Watts Up.  The really fun part?  I'll be leading a class there on Friday mornings!  Wahoo!  So if you want hang out with me and put in some hard work in the saddle, then keep your eyes peeled for updates on the Watts Up Cycling site.  There will be a free trial week in October and the studio officially opens on November 1st.

So there you have it.  I'm going to make a concerted effort to get back to blogging regularly.   My writing brain took a bit of a hiatus these last few months but I've got a few things I'm working on.  I'm also going to start using Periscope a bit more.  You can find me there @redrunningshoe - it's time for me to get over my camera shyness, ha ha.

I too have a sock obsession. I think it's because I want to pamper my feet. I have so many issues with them, and maybe they'll be happier in fun socks? A runner can only hope...

I'm looking forward to continuing to follow you into next year. I love how you keep pushing yourself! It's so inspiring to me!

I have those same sugar skull socks!! And I totally find that group rides push me harder than I would on my own or the trainer. There is a super intense practice crit that many of my race team attend (mostly guys and a few really fast girls). They tell me it takes a good season to develop the fitness to be able to hang the whole hour without being dropped repeatedly. And you will LOVE IMMT 70.3.

I think making it to one of your cycling classes became the first entry on my fall bucket list. So exciting!