Wow.  Just.  Wow.  What a weekend.  I don't know if I could have jammed anything else into it if I tried.  After a long-ish morning bike ride on Saturday morning, G and I headed out to Niagara Falls with our run club for the Niagara Falls International Marathon festivities.  There were over 30 of us that went with about 20 of us running in either the 5, 10, half or full.   Our goal was to make sure we were there by 4:00 pm at the latest so we could participate in the #PhatAssChallenge.  That, my friends, will be a post on it's own.  I will say one thing:  Take the Amazing Race and add costumes.  Kind of.

Time to get on with the festivities of the week.  I'm having good days and bad days when it comes to my knees.  I haven't stopped running completely, right now it's only once, maybe twice a week and it's short.   I'm ok with that.  I don't want to push things.  It's still early days in the rehab process so I know that some days will be better than others and I can't let the "bad" ones get to me.  This week was probably about 50/50 and was saved from being even worse by my PT and the application of "Miracle Tape" on Thursday, which I kept on my knees until last night.
Monday:  2550m swim.
Tuesday:  4km run on the treadmill, 70 minutes strength & mobility in the a.m., 24km on the computrainer in the p.m.
Wednesday:  2500m swim.  I actually felt really good today!
Thursday:  90 minutes strength & mobility.  Physio in p.m.
Friday:  Slept in
Saturday:  58km bike ride.  I could have ridden all day, it was awesome out.  It was probably one of the last rides we'll get to do outside in all the fall colours.  And it might have been the last ride I get to do with my friend Heather before she moves to B.C.  *Sad face* I shouldn't be allowed to take group selfies as I clearly don't know how to get everyone in the frame.  #SelfieFail 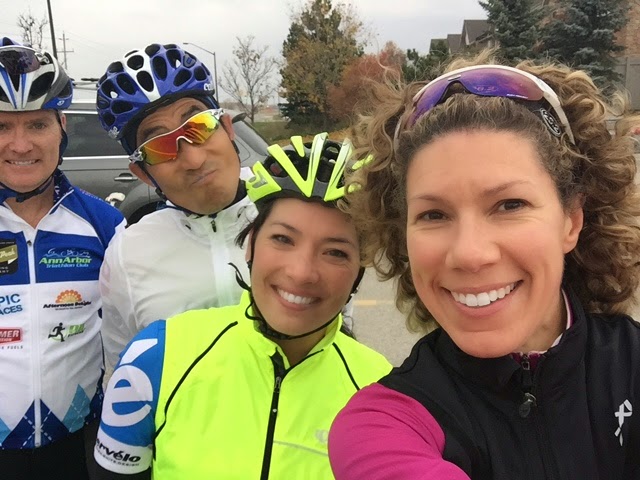 I did spend a large part of the morning yesterday jumping up and down at the finish line of the Niagara Half.  It was so much fun cheering on the folks from my run group. There were a few PR's in the group, but the one that made me the happiest was my friend Bob, whom I've coached for the last 3 months.  He's been trying to break 1:44 and yesterday he came in at 1:42:27 and he finished strong.  He ran a smart race, paced himself well and had enough in his legs to pick it up the last 5km.  That was the highlight of my weekend for sure.  I saw him with about 500m to go, knew that he was going to do it and just about lost my mind. 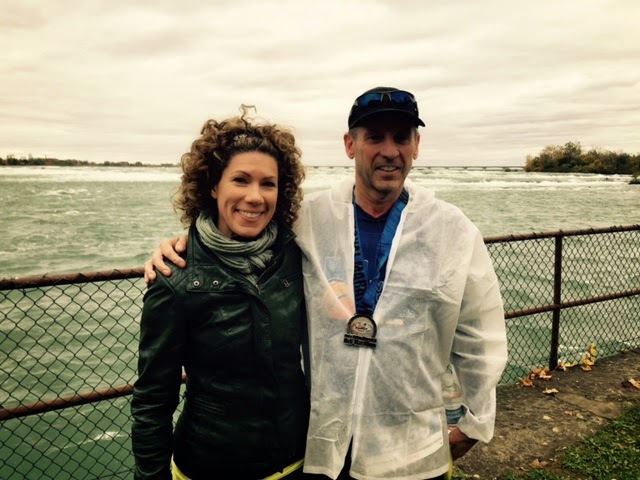 I also met up with two Facebook / Instagram pals in real life (Hi Shelley & Nicole!), which was a pleasure to say the least.  Speaking of Social Media, I had the funniest thing happen yesterday while we were spectating.  G and I were standing about 500m from the finish line cheering people on when this guy ran by, looked at me, pointed and said "Instagram!"  I just about died.  G couldn't stop laughing.  Oh the magic of the Interwebz once again.  Ian, if you're reading this, it was a pleasure to "meet" you and congrats on a fantastic race.

Everybody had a blast this weekend and we're already thinking about 2015 and how we can make it bigger and better.

Anyone else race this weekend?


Posted by Phaedra Kennedy at 9:47 AM

Great week! I'm guessing you'll also post about your 5k? Nice to meet you briefly yesterday and congrats to Bob again! It was actually not a bad day for a race. As you know, I paced the half.