What Do You Mean There's No Swim or Run?: My Very First Time Trial

In the cycling world it's commonly referred to as The Race of Truth, also known as the Individual Time Trial.  Road cycling is a team sport and the team works together.  In the individual time trial you have no teammates to help you out.  There's no peleton to protect you and there is no drafting.  It's just you against the clock.

This is not unfamiliar to me as that's essentially the bike portion of 99.9% of triathlons.  What's unfamiliar to me is doing this without a swim before it and a run proceeding it.   That's just plain weird.  But, I'm game for trying almost anything once and I really wanted to take Tom Sawyer out for a rip.  So, I decided to head up to Markham to participate in the Morning Glory Cycling Club Championships, sponsored by my race team, Real Deal.  Real Deal holds a regular Time Trial series every Thursday night during the summer.  It's open to anyone with a valid Triathlon Ontario or Ontario Cycling license.

G was doing it along with my co-worker Tom, who rides for Morning Glory.  My Real Deal teammate Graeme Rivers was also racing.  Graeme met us at the studio and we fought our way through rush our traffic.  If you live in the west end, it's a bit of a hike.  But I totally get why they hold it out that way.  The roads are great, there's a decent shoulder and not a whole lot of traffic.

I was really nervous.  I figured I was going to be racing against some seriously strong women (which I was).  When we registered we were asked to give an estimated time.  Since I had never ridden the course and didn't know what the weather conditions would bring, I guessed at 27 minutes for 15km.  I figured I could pull off 33kph for sure, maybe 35 if it wasn't too windy and the course wasn't too hilly.  You get seeded by estimated finishing time, slowest to fastest.  I ended up being right smack dab in the middle of the group, which was great as I prefer to have someone to chase.

We all lined up and watched the first rider go off.  We were leaving in 30 second intervals so I got to watch a couple of the girls go off first before it was my turn.  I rolled up to the line and Mike gave me some last minute tips on the course and how to tackle it (he's so awesome!).   Then he counted me down.  5-4-3-2-1 and I was off.  I had to clip into my left pedal which is sometimes problematic.  Then I hit my Garmin.  Yes, I wore my Garmin because I'm a data junkie and I was curious to see what my average watts would be.

The first part of the course is an uphill.  It's not a crazy uphill but it's enough that you're really working right away.  I had TS in the small ring just to get my legs spinning.  I flipped it to the big ring as I crested the hill and started to hammer.  I flew by the Church parking lot where the registration tent was and I heard G yell GO Phaedra!.  My legs were screaming and I wasn't even 5 minutes in.  I knew I should have done a better warm up.

As luck would have it, it was also pretty windy.  And of course, that first part of the course had us riding uphill into the wind.  Why would it be any other way? This is what happens on the bike, ha ha.  I figured when I made the turn onto Stouffville Road that I'd have the wind kind of at my back.  So I sucked it up and pushed as hard as I could.  My mouth was dry and pasty and I was really wishing I had drank more before I started.

I could see the girl that had started two people in front of me up ahead.  That spurred me on to work harder.  My legs were totally on fire.  We were coming up to our first turn and I was gaining on her.  As soon as we made the turn I put in a surge and I passed her.  Tom Sawyer was flying.  Holy smokes.  That bike.  It's like riding a rocket ship.  I could see the next girl a bit of a ways away but I thought I might be able to catch her.   I was cooking along at a good pace. (my Garmin showed 42 kph when I dared to look at it).  I heard someone coming and thought Oh crap but then I turned to see it was a dude.  He was f-l-y-i-n-g.  He blew by me like I was standing still.  I was getting close to the next turn and I really hoped that I'd be able to keep the momentum I had.  I figured since we climbed on the way out that this road should offer a bit of downhill.  It did, just not right away.  I turned the corner and had to climb a bit.  I was determined to stay in my aerobars for all the climbs no matter how much it hurt.

I could see the girl in front of me getting closer with each pedal stroke.  I finally caught and passed her.  My breathing was heavy and my chest was on fire.  I was turning myself inside out.  I had one other girl in front of me but I wasn't sure if I'd catch her.  I was going to try.  The back half of the course was slightly undulating.  There were a few good opportunities to get some solid speed but there were also a couple of small climbs that kind of sapped my energy.  I turned onto Kennedy road, knowing that I didn't have too much longer and pushed the pace as much as possible along here.  The road was bumpier than the others so I tried to steer clear of the bumps as much as possible.  There were a few more cars along here as well but they gave me a pretty wide berth.

By this point I felt like I was starting to lose a bit of steam.  My legs were starting to object to the effort.  I channeled my inner Jens Voigt and told my legs to shut up.  With an f-bomb in there for good measure.  I turned the final corner, expecting the finish line to be there.  It wasn't.  Ugh.  Which meant I had to climb the hill again.  I had lost sight of the girl in front of me as well so I didn't have a bunny any more.  I crested the top of the hill expecting the finish to be at the Church.  It wasn't.  My oxygen starved brain was totally not functioning so instead of continuing to ride, I slowed up and asked some of the other girls that had finished where the finish line was.  They yelled and pointed down to road.  Oh crap.  I tucked back into my aero bars and hammered, my legs and chest burning.  At least I had a bit of a downhill coming up.  Two seconds later, I heard someone yelling that they're coming up behind me.  I turn to see Michelle Pearlman.  She yells words of encouragement as she passes me, urging me to go with her.  I tried but she is much too mighty on the bike.  Her catching me, motivated me to dig deeper.  I didn't want to get caught again this close to the finish line.  I saw her fly through and then a few seconds later I crossed the line and waved to the photographer.  Because that's what you do at the end of a gut busting time trial, ha ha.

I did a slow ride back to the parking lot to cheer the rest of the riders on.  I stood and chatted with Nicole, one of the girls that had ridden in my group (we both had matching P3's!).  The final riders filed in and Mike and Barbie came in to announce all the times and then do the awards.  My Garmin had clocked me at riding 15.13km in 24:59.  But, I didn't start it right away, nor did I stop it right away so who knew how accurate that was.

Turns out it wasn't that far off.  I was 24:57.  A whole two minutes and change faster than what I had estimated, ha ha.  And, amazingly, that time was good enough for 3rd place overall!  YAY!  What really blows my mind is that I was able to average just over 36kph.  WTH?  Tom Sawyer really knows how to rock!

I really enjoyed myself and would definitely consider doing it again.  Real Deal does a great job at keeping it low key and fun yet still competitive.  They handle all the timing so you don't even need to have a timing device.   I'd highly recommend this to Toronto area triathletes.  It's a great way to see what you're really capable of without having to worry about running afterwards.  You can do that if you want but be prepared to be heckled.  Good naturedly of course.

Thanks to Morning Glory & Real Deal for putting on a fun event! 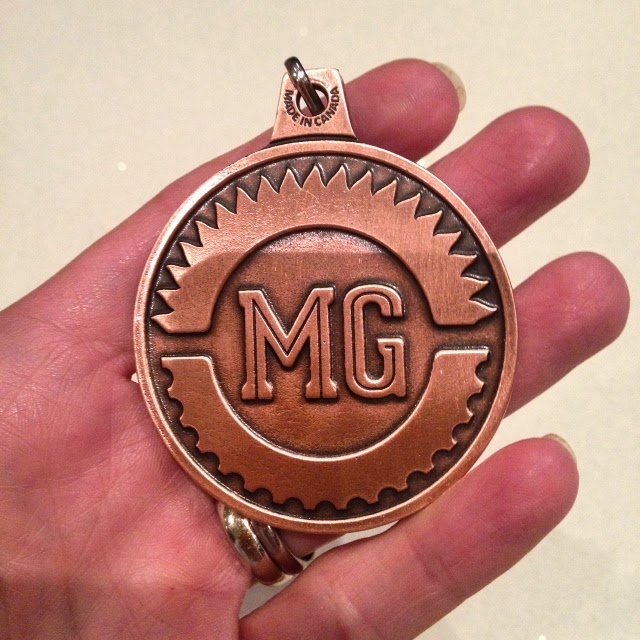 Posted by Phaedra Kennedy at 5:03 PM

Low key? Really? I felt like I was racing with you! Great recap, and great job! I'm drooling over your bike...

Glad to hear you had such an awesome experience on your new bike. Are you planning on doing road racing or more time-trials in the future? Third place? I think you should!!

I'm totally in love with my new bike!!!
Kristen- I am planning on doing another time trial this Wednesday weather permitting. Road racing scares me a bit. I don't like being on my bike in a pack because I'm afraid of crashing. That being said, I'm sure I'd benefit immensely from riding with some roadies and who knows, maybe that will happen in the future. :)