Busting A Gut at The Toronto Women's 10km

I'd been looking forward to this race for a while.  Race director Cory Freedman always puts on a good event and it's a lot of fun racing in a women's only field.  Plus the swag is always great.  This time around was no exception.   Another beautifully designed shirt by my pal Natalie Serkin, along with a great finishers medal.
The field at these races has become increasingly competitive according to Cory.  This is the 3rd year running for her race series and it has grown in popularity, with the Half Marathon usually selling out months in advance.

Knowing that there would be a lot of top notch runners here, I figured I'd have to pull out my A++ game to get on the podium.  I looked up last year's results and was pleasantly surprised to see that the woman that won my age group did it in 45:28.  Hmmm.  My goal was to run sub 45 minutes.  I figured if I could do that, then hopefully I'd manage to get on the podium.  It would all depend on who showed up to race. 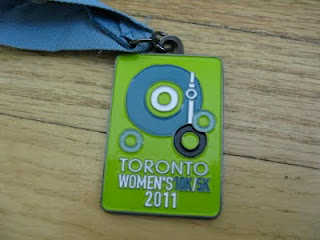 My week leading up to the race was relatively stress free at work, which was a nice change but my eating left a LOT to be desired.  Normally I eat really cleanly but not so this week.  There was a LOT of sugar consumption in the form of chocolate and various baked goods.  I had 2 super crappy workouts late in the week; a not so good interval session and a really bad swim.  I hoped that this was not indicative of what my race would be like!

Since we are living really close to the race start and I had to somehow get a 23km run in, I decided that I'd run out to the start line, race and then run home. I figured it was about 5-6 km out to Sunnybrook Park from where we're staying so that would be a nice warm up.  I left the house at 6:55 am and cruised over to the park.  It's pretty much downhill all the way which was nice.  I got to the park nice and warmed up.  Stretched a bit, checked my bag and wandered off to the porta potty.  I found Gary and Andrew (my nephew) and Gary snapped a couple of shots of Andrew and I together before I made my way over to the start line.

They had marshals with signs that had your estimated finishing time on them so we had to line up beside them.   I found the 40-48 minute finishing sign and hung out around there.  All of the really fast looking ladies were up there too.  Cory came out to the start and got us all to move up right to the end of the timing mats.  So I was right up at the front.  Geez.  The gun went off and took off like a shot.  It was me and another blonde girl in the lead.  What the hell was I doing?  This is not where I belong right now.  My heart rate spiked immediately and I thought "oh God, I'm going to implode if I keep this pace up".  A couple of women passed me as I started to slow down.  Then a few more passed me.  It's ok.  It's still early.  I need to run my own race and not worry about getting passed.  I knew when I hit the first km in 3:58 that I was seriously going to pay for it later on.  The question was, how long could I hang on?  Not the smartest way to race a 10km but I wanted to go "Balls Out" and see what I could do.  Next time I race a 10km, I'll actually have a race strategy.   I hit 2km in 8:04 so I knew I slowed down a bit.  3km blew by in 12:11.  Ok good.  I knew that if I managed to run sub 4:30 km's I'd be golden.  I was running roughly 4:06's so I had a good buffer.  Just past 3km I caught and passed 2 of the women that passed me.   Sweet.  Now I hoped that I could hold them off.
Getting to the 5km turnaround seemed to take forever.  I hit 5km in 20:24 (which is also a PB for me at that distance!) and I got to see where the other women were behind me.  Close but not too close which was great.  I knew that the way back was partially downhill so I hoped that I could make up a bit of time.  At the 6km mark I was really starting to suffer.  My ridiculously fast start was starting to catch up with me.   I ran through the aid station and grabbed a cupful of e-load, spilled half of it on my shirt and managed to get the rest in my mouth.  That boost of sugar helped but the lactic acid was really starting to build in my legs.  When I hit the evil bridge at Don Mills road I thought I was going to hurl.  That hill is just plain awful.  I made it up and looked back and didn't see anyone behind me (whew!).   I eased up heading down the bridge to try and catch my breath.  Once I got off the wooden slats and hit the pavement, I picked up the pace again.   At this point I joined the 5km runners.   They were the mid-packers so I ended up having to run in the middle of the path to get around them.  There were a couple of spots where I had to slow down because I had runners in front of me and runners coming towards me.  I managed to get around them and keep going.

I hit 8km in just under 33 minutes.  I didn't have much left in the tank at all.  I figured even I could hang on to 5 min/km's I could still pull off a sub 43 minute 10km.   I knew I was going faster than that so maybe I'd see a 42 minute finishing time.    I was totally dying though and my legs were really starting to tire.  The 9km mark seemed to take forever.  I hit 9km in just over 37 minutes.  I thought I might just be able to squeeze out a sub 42 minute 10km if I totally busted a gut.  I could hear the music at the finish line and I pushed for all I was worth.  I could see the clock counting down to 42 minutes.  One last push and I made it across the line in 41:55.  Sub 42 minutes by 5 seconds.  Whew.  And a PB by over 4 minutes over my previous 10km record that I set in May.  Crazy.

I saw my friend Nat waiting with Gary and Andrew and she gave me a big hug and congratulated me on my race.  Several of the really fast women came by and congratulated me on a great race.  I was pleasantly surprised.  Nat then informed me that she thought I made the top 5 overall finishers.  WHAT? I wasn't really paying attention to where I was in the pack to be honest, I just ran.

I wandered off to get some food and stretch a bit and then I went to check out the results.  Sure enough I was 5th overall and 1st in my age group!  WOOHOO!  All the women ahead of me were in the 30-39 age group.  That is one tough category to be racing in!

So despite my less than optimal week of eating, I still managed to surpass my goals.  The next time I race a 10km, I'm going to make sure I go out a lot slower.  I figured that I lost about 12 seconds per km in the last 5km.  That's a pretty big BOOM.

Posted by Phaedra Kennedy at 1:58 PM

Fantastic job, I'm really happy that your training and focus is paying off this year. I think you're believing in yourself more and more as the months go by :)

ha ha ha! Thanks Babs! Me too!! I can't wait to see what I can pull off come October!