Heart rate monitors have come a long way since they first arrived on the scene back in the 80's.  I didn't start training with one until 2002 when I decided to do my first marathon.  At the time they were super basic.  You got time, distance and your average and max heart rate.  There was no GPS capability until Garmin released the Forerunner series in 2003.  Now, the variety of watches and features is incredible.  One thing I have noticed is that the heart rate monitor strap has become an option in many of these packages.  An option???  If you're going to spend upwards of $500 on a fancy watch, why not make sure you have all the bits and pieces so you can take advantage of all the features?   Ok, mini rant over.

One of the features that Garmin came out with years ago when they introduced the Garmin 920xt and the Garmin Fenix 2, was an estimated Vo2 max feature.  I thought this was a pretty cool feature and often wondered how accurate it was.

What is Vo2 max and why is it important?  Vo2 max "is the maximum rate of oxygen consumption as measured during incremental exercise, most typically on a motorized treadmill.  Maximal oxygen consumption reflects the aerobic physical fitness of the individual and is an important determinant of their endurance capacity during prolonged sub-maximal exercise" (Wikipedia).

So, the higher your Vo2 max, the fitter and potentially faster you are.  I say potentially because a few things can come into play that can affect your speed:  1) running form and your physical limitations and 2) your mind / tolerance for pain.  There have been several studies over the last few years that essentially say that our brain dictates our effort and will cause you to ease up even when you have a bit more in the tank.  Knowing that, you really need to give it 110% during one of these tests.

Based on the Vo2 max determined by my Garmin and the predicted race times associated with it I should be able to run an 18 minute 5km, a 39 minute 10km, a 1:25 half and a 3:03 marathon.  If I look at my PRs for all those distances, I'm at 20 minutes for a 5km, 39:40 for a 10km, 1:27 for a half and a whopping 3:16 for a full.  The only one even remotely close was my 10km time at 39:39.  I like to think I know how to suffer so I don't think I can chalk it up to my brain (but who knows).  The only thing left is running form / physical limitations.  My running form is not ideal so I'm sure I'm losing a fair bit of time because of that.  Or, Garmin is grossly overestimating my abilities (which is also possible).

At the end of July, I had the opportunity to do a Vo2 max test.  Surprisingly it was the first time I've ever had this test done.  I've had lactate threshold tests and lactate balance point tests done but never a Vo2 max test so I was curious to see how my Garmin info would stack up to the test results and to see where my fitness would rank in terms of my age group.

The test is usually done on a treadmill and you have to either wear a mask that covers your nose and mouth or, breathe through a tube with your nose plugged.  It's kind of like breathing through a snorkel.  It's not natural and it can feel quite claustrophobic.  I had a few moments of panic at the start but once I got my breathing regulated I was fine.  The test is a graded test so you go through various stages of exertion.  I started by sitting on a stool on the treadmill with the "mask" on.  Then I started walking for 5 minutes to warm up.  After the warm up the testers set the treadmill to roughly my 10km pace and I started running.  They said they were going to increase the grade 1% every minute.  I settled into a good pace and before I knew it, they were increasing the grade again.  One of the testers asked me about the speed so I told her she could up it a little bit.  So they increased the treadmill speed a bit.  I kept going and they increased the grade again.  And then again.  Each time they increased the grade, I had to point to a rate of perceived exertion (RPE) on a chart.  The grade was increased again.  My breathing was becoming more laboured.  I was definitely starting to work harder.  The grade was increased again and then again.  I had to signal when I thought I had one minute left.  I was really starting to labour.  The testers were both women and they were awesome at encouraging me to keep going. They increased the grade again.  That increase was it.  I signalled I had one minute left and fought with everything to keep pushing for that one minute.

Holy smokes was that hard. 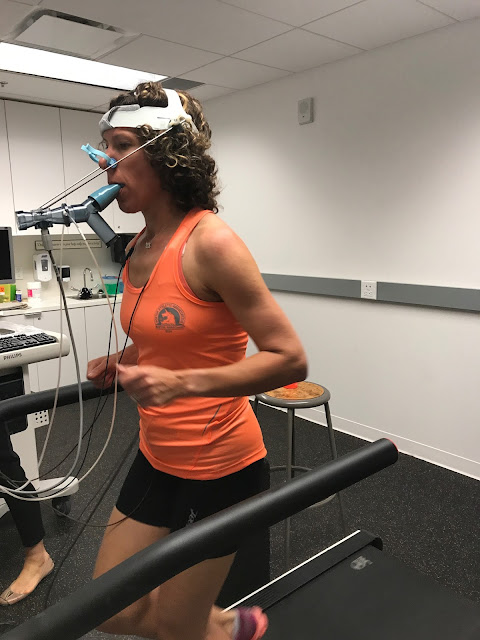 Could I have gone harder?  Maybe.  If I wasn't breathing through a tube, then yes, of course I could have.  But that's not how this test works.

So, what was my end number:  53.1 ml/kg which puts me well above the norm in my age group.  It even puts me above the top end of the 25-29 year old age group.  I'm not surprised given that I'm a long time endurance athlete.  What I am surprised about is how close that measurement came to what my Garmin predicted.  My Garmin predicted a Vo2 max of 54ml/kg.  According to what I've read on various forums, Garmin has been pretty accurate in it's predictions.

The other thing that surprised me was my max heart rate, which came out at 184.  I have hit higher than this number in training both running and on the bike, which leads me to believe that I didn't give it my all in the test but that my head got the better of me.  My legs were just starting to feel that lactic acid burn when I signalled one minute left.  My lungs were burning and my breathing was laboured but in retrospect, I think I could have done one more minute, possibly even two.  That probably would have gotten me closer to what I suspect my max HR to be.

Why does all of this matter?  Well, as a training tool Vo2 max is helpful in establishing heart rate training zones if the test is administered by someone that knows how to do that.  It's also a good way to measure improvements in performance.  However, the key to an accurate test is to give it your all and that means pushing through your perceived limits.   You need to train your brain just as much as your body.

Have you ever had a Vo2 max test done?  What other types of performance testing have you done?

Posted by Phaedra Kennedy at 10:20 AM