Ok where did last week go?  I had every intention of posting more than once last week but that never happened.  Life got very busy and I was too mentally exhausted to even think about finishing one of the many draft posts I have tucked away.  Sad I know.  Sometimes even the best intentions are never realized.   Luckily for you guys, I spent a good chunk of time this weekend finishing up a few posts that I will publish this week.  Good thing, because these next few weeks look like they are going to be B-U-S-Y for me.  Multiple shoots, consecutive days.  Enough said.  We'll see how my training goes over the next couple of weeks.

I had a really solid week this past week even with my knees acting up.  I no longer have knee pain when I run, it's only post run and it's a low grade burning pain / soreness / tightness all around my knee cap that I feel when I'm going up or down stairs.  Kris has been trying acupuncture to treat it.  Sometimes it helps, other times, not so much.  I've resorted to icing and taking Aleve a couple of times a week.  I really don't like taking anti inflammatories as they mess with my stomach but I gotta say, I felt like a million bucks after taking them.  Between that and smearing Voltaren all over my kneecaps at night, I've been managing the pain.  It's frustrating because I feel like I'm doing everything right.  I'm retraining my gait so I'm no longer over striding.  I'm landing with my foot under my body so the load has been taken off my knees yet my knees still hurt.  I refuse to accept that this is my new normal.  Not when I have to take drugs to manage the pain.  Not only do my knees hurt but I'm also experiencing sciatic nerve pain on the left side of my body.  I think my left side is so tight, especially in the glute and hip area, that it's putting pressure on my sciatic nerve.  I'm good for about the first 5-6km of a run and then I can feel it starting to flare up.  Maintaining my form when that starts to happen is a real challenge.  I had a bit of meltdown on the phone with G on Thursday because I was just so frustrated.   I get that with healing, there's always going to be peaks and valleys.  I guess I'm currently making my way through a valley right now.  But, at least I'm running so there's that.

I led another Computrainer class on Sunday which was fun.  The regular instructor is back next week so I'll get back on track with my regular Saturday morning run.  Although the group did invite me to come back and ride with them next week since one of the members will be away.  I may actually take them up on that.  Unless of course it's nice out.  Then I may end up going outside and riding.  There's just over one month until Paris to Ancaster and I REALLY should get out on my mountain bike.  YIKES.

Anyway, that's a freak out for another day.  For now let's recap my week.

Monday:  3000m swim in the a.m.  4km run followed by Pilates in the p.m.  More rotation work.  To quote Elyse: Rotation is my friend!  I felt so good at the end of that session, I slept like a baby.  She showed me this shoulder / back extension thing that I can do on the foam roller and OMG it loosened up my shoulders and back so much.  I felt so relaxed afterwards.  I did it again at the gym a few days later.  Sooooo good.

Tuesday:  60 minutes of strength work, then I was off to the Runner's Academy.  Knees were so damn sore I couldn't really run so instead this happened: 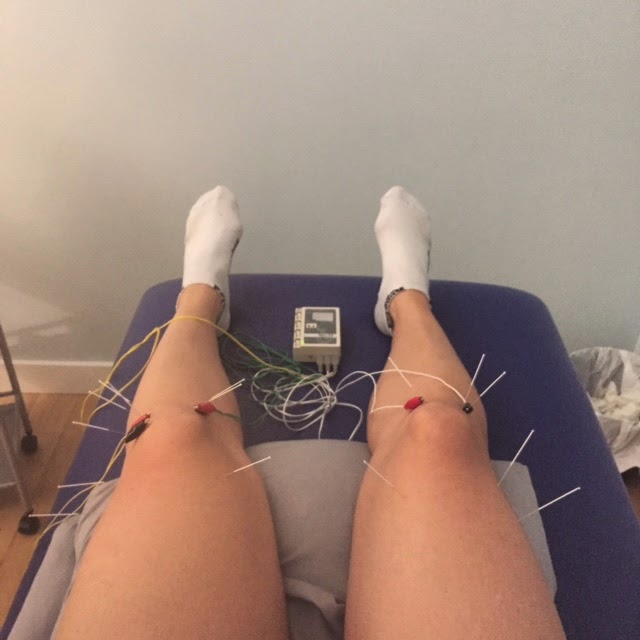 Did a solid 60 minute ride on the trainer in the p.m. as the thought of running didn't really appeal to me and my sore knees.  And it was super windy out.

Friday:  a glorious, well deserved sleep in.  I had every intention of going to hot yoga after work but at about 3:00 pm that afternoon, I gave up on that idea and went for this instead.  I did lie on the living room floor and stretch after.  That counts for something right? 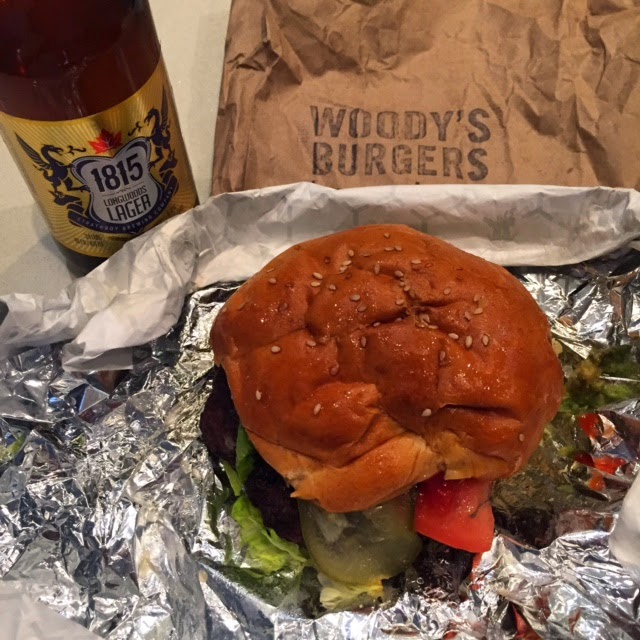 Saturday:  12.43km run in an hour.  That, my friends, is my longest run this year.  It wasn't pretty but I got it done. My legs certainly felt it by the end of the day. 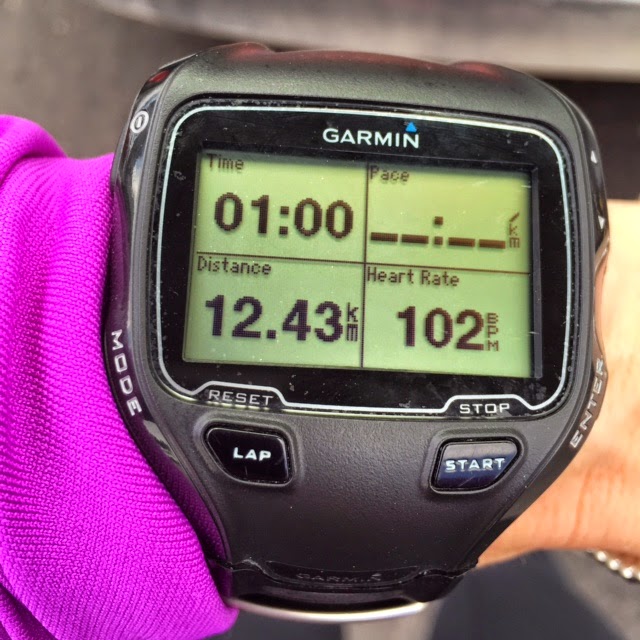 Sunday: 2400m swim followed by my longest trainer ride this year: Just over 55km in 1h 45 minutes.  Followed by eating everything in sight and encasing my legs in compression tights. 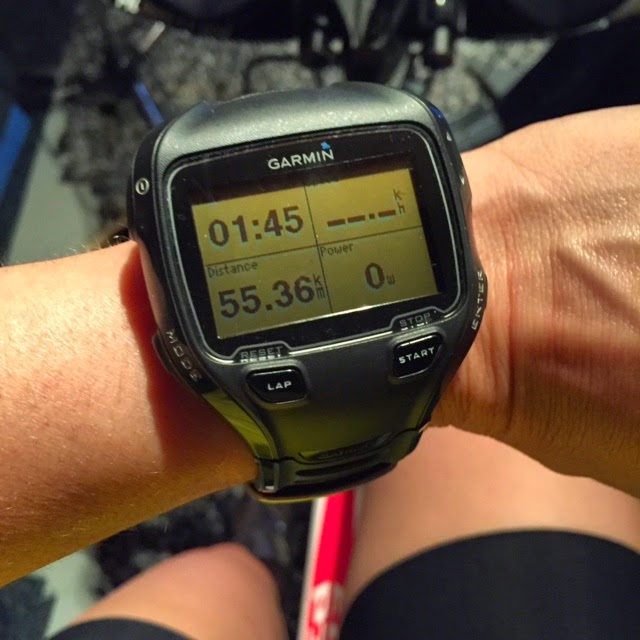 This has been my biggest week of training in a while at 11 hours 32 minutes.  I'm hoping to build on that this week with a bit more running and some more time in the saddle.

How was your week of training?  Who raced this past weekend?

Posted by Phaedra Kennedy at 8:31 AM

Ugh, sorry about the uncooperative knees :(

The sciatica, though, now that's something I'm familiar with! I have recurring problems with sciatic pain and I've found over the last year that there's a couple of trigger points in my low back/glutes that seem to cause it. when I hit the right spot with a tennis ball or the foam roller, it's like magic how rapidly the sciatic pain vanishes. It eventually comes back, but often not for a few months. Worth a try, anyway!

I have had a burger craving for weeks. I gotta get one of those!

And it looks like you are crushing your workouts girl!

Isn’t it interesting when an injury or soreness doesn’t hurt during an activity, but always after or doing something minor like walking up a set of stairs? Sorry to hear you are still struggling on and off with pain. I’m glad that you are still able to run, it’s just a bummer you can’t do so without some penalty.

That picture with all the pokies in and around your knee looks crazy. Is it painful?

Woody’s Burgers looks amazing. I’m glad that is one craving of mine that has not changed during pregnancy. ☺ Great week of training!

Oh man, I totally feel for you on the chronic running pain. I think I'm going to relegated to permanent calf pains and aches at this point. I feel like such a mess. And sometimes my right IT band will suddenly tighten up mid run and of course my right leg is a bit shorter, so then my whole gait and form go to hell. Just know with every run I'm out there commiserating along side you.