You know it's been a brutally cold winter when you think that a high of -5 is balmy.  I have news for you.  That's still flipping cold.  Especially when there's a little bit of wind.  That was the forecast for Sunday's Frosty 5km.  Not having run outside much these last few weeks (or at all really), I was totally unsure what to wear.  I knew that my Zoot jacket would be too heavy.  So I thought layers would be a good idea.  As an afterthought I packed my 2XU wind blocker vest.  Best decision ever.  That outfit below was promptly changed when I went outside race morning, ha. 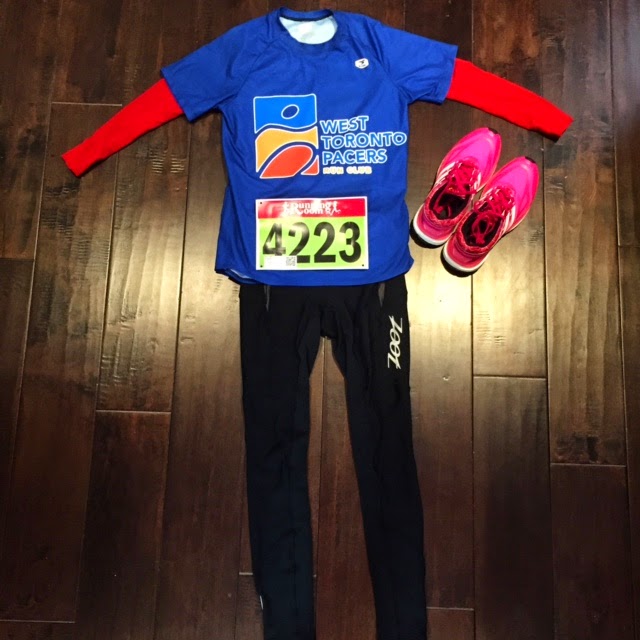 I contemplated a heavier long sleeve and then thought "Nah", I'll be fine.  Famous last words.  But as usual I'm getting ahead of myself.

I signed up for this race in January when my knees seemed to be getting better.  I was hopeful I was on the mend.  But then things started to seem to be regressing and I got frustrated so I stopped running regularly and went back to once a week.  If that.  Although when we were away I ran three times.  I couldn't pass that hot weather up.  I had good intentions of doing speed work and I did do a few harder paced runs.  But mostly I stuck to riding my bike, swimming and doing my physio exercises.  I figured I was only getting so far with the physio work, I needed a second opinion.  I started going to the Runners Academy to work on retraining my gait - there will definitely be a post about this as things progress.  At my most recent appointment, last Thursday, three days before the race, we actually got down to doing some drills and treadmill work.  This work involved me lifting me knees more and really using my calves to push up.  They were a bit sore after but not too bad.  I stretched when I got to work and then foam rolled them when I got home.  When I got up on Friday they were tender and sore and by the end of the day they were killing me.  Saturday was even worse.  I went to the pool to try and swim out some of the soreness and then I spent the rest of the day in compression socks.  I was really worried I might not be able to run.

Sunday morning I got up and my calves were still tender to the touch.  Not as bad as the day before, thankfully.  I decided I should go out and test my legs.  So I got dressed, laced up and headed out the door.  Amazingly, once I got going, they felt ok.  My gait was slightly altered but I figured with a good warm up, I should probably be ok.  I got myself sorted, ate my breakfast and hit the road.  It only took me about 30 minutes to get to Burlington so I parked in the usual lot, sat in the car and enjoyed my coffee, then opted to make my way to the Performing Arts Building to drop off my bag.  I hung out in there for as long as possible then went out and did a warm up run.  It was then that I realized just how bloody cold it was and how inappropriately dressed I was.  Awesome.  It was still really early so I made my way over to the Waterfront Hotel where the start of the 5km was and went inside to get warm and use the facilities.  I hung out in there until there was about 10 minutes until the start then I went out and did a bit more running and some drills.

I wedged myself into the crowd and positioned myself a little bit towards the front of the crowd.  I had ZERO expectations for this race, as I typically do given that it's the first race of the year.  This was going to be a benchmark for me to see just how much work I had to do to break 20 minutes for a 5km.  I was thinking that given my lack of proper speed work, I'd probably come in between 21-22 minutes.  Anything faster than that was going to be a massive bonus.

The race start got delayed by two minutes so I had to continue my jumping up and down.  My arms were cold.  As were my hands.  I had gloves on but clearly they weren't warm enough.  I kept blowing into my hands, hoping that once I started running, my hands would warm up.  Finally they started the countdown and we were off.

There were a few women in front of me, a couple of which took off like a shot.  There was no way I'd catch them.  But, there were a few others that were just slightly out in front of me.  A 5km is about pushing as hard as you can for as long as you can.  I am notorious for going out too fast in events like this and this was no exception.  I caught one of the ladies within the first half km.  When I hit the first kilometer mark I look at my watch and saw 3:51.  Had I not been gasping for air I would have said WTF?   I didn't think I'd be able to maintain that but I was sure as heck going to try. I caught the other two ladies just before the 2km mark.  My 2km split was 4:01.  That was still way faster than I thought I'd be.

I could see the turnaround up ahead.  The lead girl had already gone around it and was making her way back just as I hit the 2km mark.  She was FAST.   At that point I realized that I was in 3rd place.  Say What?  Certainly not what I expected.  Now I just had to hang on to it.  I was really starting to hurt as I made my way towards the 3km mark and I thought for sure that I was slowing down.  I heard my Garmin beep and I looked down to see 4:00 on the nose.  Holy crap.  I had no idea where this was coming from, other than perhaps my newly recruited glutes, but I was happy.

At the turnaround we started running into a slight headwind.  It wasn't horrible but it was cold.  By 3km my hands were frozen, my nose was running like a tap and my lungs were burning.  I just wanted to be done.  I remember telling myself that I only had about 8 minutes left if I didn't fall apart.  I could feel my form starting to get really sloppy and I figured this next km wasn't going to be pretty.  I heard someone call my name and I saw Brenda from the Toronto Triathlon Club.  I was nice to see a familiar face!  I was really hurting when I saw her so it took my mind off the pain for a minute.  As I got closer to the 4km mark, I could feel the wheels slowly falling off the wagon.  My legs were fatiguing.  Sure enough, that km was 4:07.  The worst part was that I knew there was a small hill and the false flat up to the finish line in the last km.  I thought for sure I'd totally cave.  But I somehow found another gear and pushed a bit harder.  I heard footsteps behind me and glanced to my left to see a guy catch me and pass me.  Then another one.  As long as it wasn't a woman, I was happy.

I rounded the corner towards the finish line, right behind them.  They pulled away up the incline and it took everything I had to push my body towards the finish line.  I could see the clock counting down to 20 minutes.  I thought for a second I might actually make it.  Then I thought I might actually have a PR.  I heard Kevin McKinnon announce my name, followed by "and she'll take the overall Masters Female win".

I crossed the line and stopped my Garmin.  20:09.  Two seconds off my current 5km PR.  Apart from wanting to barf, I was completely gobsmacked.

I got my medal and immediately went to get my jacket.  I was FROZEN.  While I was getting warmed up they posted the results so I went over to take a look.  Apparently my Garmin was wrong.  I was actually 20:07.  Which is my current 5km PR that I set in August last year.   It's gotta be the glutes, man.  It's gotta be. 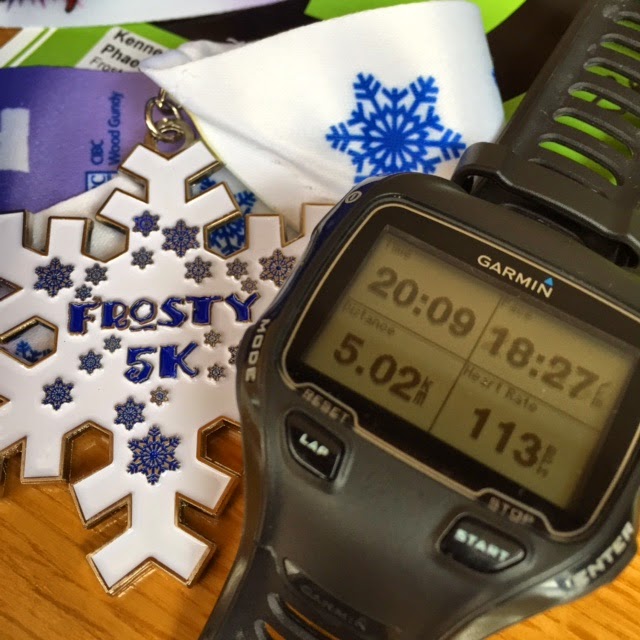 Mind=Blown.  Once again.  This has given me so much hope for a stellar year of racing once I actually get back to proper training.  The fact that I did this with NO speed work means that a sub 20 minute 5km is in my future.  It's totally going to happen. I'm so close I can almost taste it.

Posted by Phaedra Kennedy at 8:51 AM

Awesome! I spent the morning stalking social media to see how everyone was doing! Glad everything is working out well and there will definitely be a sub 20 5k at some point!

YOU ARE A ROCKSTAR GIRLIE!! Congrats on a fantastic run!

Way to go! Awards are great but when you don't expect it they are that much better

Holy moley girlfriend! Your glutes were on fire!

"Apart from wanting to barf, I was completely gobsmacked." --> okay this made me laugh.