Today's Featured Athlete is Shaun Johnson and he blogs over at Top Runners Review.  This is the story behind his first step.  You might want to grab a tissue, I know I did.

I want to clarify,  I have always loved running. In elementary school I was considered the fastest kid at my school.  In Jr. High I would wow the coaches with my mile time.  In high school, I did not do track because the track coach was fat, and I though that a fat guy would have nothing to teach me about running, but I did do football, and I could run almost as fast backwards, as my opponents could run forewards.  I have always loved running, but it was not really a part of my life until 2010.  2010 was a bad year for me.

I can still remember the day, September 12, 2009.   My wife and I had gotten into a horrible fight. She took our kid and went up to her parents house to cool off.  I thought this was it.  Our relationship had been on the rocks for a while and I though that this was the straw that broke the camels back. I hated the thought of divorce.  I feel that when you get married, barring extreme circumstances, you are in it for the long haul.  A big fight is far from extreme circumstances, but I still felt like this was it.

I did not know what to do.  I spent the evening by myself.  I tried to use the tv to distract me, but that didn't work.  Loud music, reading, playstation, nothing seemed to work for me.  I couldn't stop stressing.  I lay in bed for a couple of hours, but I wasn't tired.  At 1:00 in the morning,  I put on some cross trainers and shorts and headed out into the rain.  Yes, on a night like that I though it appropriate for a run.

I walked to a local park and ignored the sign that says that the park closes at 10PM.  That's where I relearned to run.  Lap after lap, I didn't want to stop. I didn't even take walking breaks.  A few laps in my nose started to bleed, I didn't care.  I was there to run.  That is where I came up with the term, 'Just me and the wind'

When my friends ask why I run, I tell them, 'because it is just me and the wind', and that is what this run really was.

That night I didn't really do a lot of thinking,  but I did manage to relax.   I convinced myself that it would all work out.  I realized that there is so much in life that doesn't matter.  I learned to enjoy every moment of life, just like I began to enjoy running again that night.  I learned to run.

But I quickly forgot it again.

After running for 3 hours I went home just in time to receive a phone call from my wife telling me that she was sorry, and she wanted me with her...and that is the last run I had until the end of the year.

December 4, 2009, same story, different chapter...different ending.  An even bigger fight, nothing had changed since the September fight, things had only gotten worse.  Her parents hear about it and come to pick her up the next day.  I helped to pack her up and then I kissed her goodbye.  Yes, we kissed goodbye as my wife drove off to move in with her parents while we try to get things straightened out in our marriage.

After she left I went inside, and instantly I knew the solution.  I dusted off the treadmill, and I ran.  I put in a movie this time, and again, I got so lost that I found myself.  It was starting to click how important running was to me, how I needed to run. 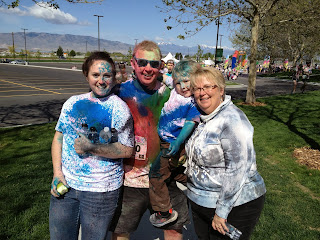 Throughout the first half of 2010 I really tried hard to fix my marriage.  I signed up for marriage counseling, but my wife would never show up. I took my wife out on dates, and they were fun, but they always ended back on her parents door step. Every so often, I could feel things building up inside, and I would run on those days. By May, I had gotten sick of trying to fix the marriage alone, I went for a run, and then I filled out the divorce papers, and then I went on another run that same day. 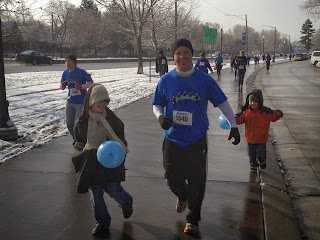 June 2010, my brother got in a horrible long board accident and we were told that he only had a small chance that he would live through the night.  I couldn't run, but I wanted to.  The first chance that I felt like I could step away from the hospital (a couple of days after the accident and my brother had stabilized) I ran.  This run was much like the first, just me and the wind, no deep thoughts, no pain in my legs, just me, and a realization that part of my life is to run.  That is when it clicked,  I am a runner. 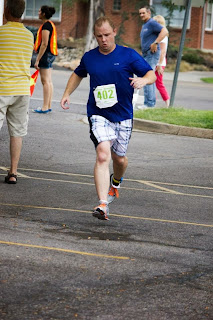 I haven't had a perfect running schedule, there have been months where I don't run, but I always come back.

My brother has recovered to 90% of normal and I'm now divorced.   I've also become a runner.

That is Why I Run!


Thank you Shaun for sharing your story!

Facebook:  Top Runners Review
Posted by Phaedra Kennedy at 9:12 AM

Email ThisBlogThis!Share to TwitterShare to FacebookShare to Pinterest
Labels: featured athlete, Shaun Johnson, Why We Train

Good for you Shaun for re-finding running! It is a great stress reliever and a source of joy.