This week's Why We Train Featured Athlete is Courtney Fields.  Courtney and I "met" through the Sweat Pink community.  She is a fellow triathlete who has set some awesome goals for herself next year.  Today she shares her story as to how she got started in the sport of triathlon and what keeps her going.
********************************************************
Perhaps a bit of background about myself would be nice. I'm Courtney, 25, recently married, currently underemployed for my education and experience level, own a house and a crazy chocolate lab named Griswold with my husband Rob, and we live in the thriving heart of New York wine country.

I've been athletic my whole life just about. My parents had my brother and I in all sorts of sports growing up. I dabbled in gymnastic, showed horses competitively for three years and did a season of swim team that I was not a fan of. But I found my athletic niche early; running.

I joined modified track at the tender age of 12 and from there I developed a love for running. I ran track all through junior high and high school and even qualified for states as a short distance hurdler, the 110 meter and 200 meter hurdles respectively. Don't let my skill over the hurdles fool you though. I top out at 5'3.5" on a good day, but I'm bottom heavy so I'm all thigh, which made me an excellent jumper. I also competed in, and frequently placed at, the long jump. And even taking full course loads, working full time a BBQ joint, and taking a night class at a local community college, I managed to make time for track up until my senior year, and even after that I still ran and worked out regularly.

Off to college I went and it was at orientation that I learned of women's rugby. I had always been fascinated by full contact sports and longed to play one, so I joined rugby my second semester at college. This was both good and bad. I loved rugby, and still do, but I felt underutilized and over looked. It was a club sport and we didn't have a coach, so our team was run by captains and playing time was seemingly directly correlated to how much you partied with the team in your free time. And while I do enjoy a raucous college party as much as the next kid, I had my own friends I preferred to party with, so my field time suffered. Over the two years I did spend on the team though, I played enough to have some fun and get hurt a few times. One broken knuckle, one torn meniscus, and one cracked rib that was my final straw (the knee and the rib were back to back weekends too, which should tell you how hardcore women ruggers truly are. Don't think we don't tackle bitches just as hard, if not harder, than the boys). And while the pain in my knee flairs up, usually from too much driving, my rib dent has almost all but returned to a normal, not sunken in and terrifying state.

It was with Rob at college that I competed in my first 5k. I had been only running here and there and from time to time at this point, nothing consistent. We tried to get out and trail run or go to the gym sometimes but it was infrequent. The day of the race it was horridly hot and humid and the course was an out and back in the direct sunlight on the shoulder of a busy county road. I walked twice, complained, panted and cried. As someone who was a state qualifying track star, this was a low place to be. 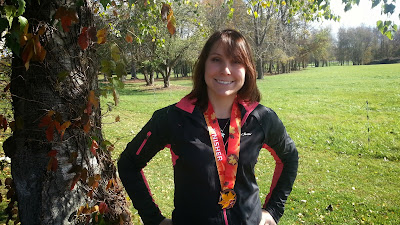 It took some time post college for me to get back into running and working out on a regular basis. I accepted my first big girl job right out of college, a teaching position at the worst (I'm not lying, the state and national statistics back my claims) school district in the state and one of the worst in the entire country. The full time job I was verbally offered fell through after I was hired and by the time I signed my contract I had a piece meal job working in three different school all on opposite sides of the city, teaching half the day outside my certification to Spanish speaking students (I speak zero Spanish, in case you're wondering). It was exhausting, mentally, physically, emotionally. I spent an hour drive in, about half an hour driving from school to school, and an hour drive home. My weight suffered terribly and the kids were horribly mean. They spit on me, cussed me out, threw things at me, told me they hated me, called me fat, you name it. Nine times out of ten the parents didn't give a crap about the behavior their kids exhibited and the administration was even worse. It varied from school to school and when one would become successful they'd refuse to share whatever secret they had figured out with the rest of the district. I got scolded, belittled, and demoralized. And even though in February of that school year I was offered employment elsewhere, I toughed it out. But you better believe in August when they called me back at a cut position I politely declined.

From there I spent about eight months unemployed. As if working in Hell prior wasn't defeating enough, being unemployed definitely was. Nonstop job applications just to never even merit a rejection letter and the only places offering me employment paid minimum wage by the hour. I was so over qualified for the educational requirements that were generally high school diploma or GED, and there I sat half way through my Masters.

Finally, I got a call from The Council. They were offering me a job. They were the job I turned down in February, re-interviewed for in August and got turned down for the position, and now they were calling just straight up offering me a job. And I jumped. While the pay isn't great, and it's not teaching, my passion, it utilizes my health degrees and the benefits are fantastic so I can't really complain. And now I've been here about a year and half and it's just peachy (minus being chained to desk 9-5 unless I'm out at a program, ugh).

Triathlon was always something that intrigued me. But it wasn't until August of 2011 that I said, "I can do that". That year, a number of people I had gone to college or high school seemingly participated in the Syracuse Iron Girl, a longer sprint tri. I saw the pictures and facebook statuses and thought "pfft, if they can than so can I". And I did. When registration opened at midnight on November 1st for the 2012 race I registered. It sold out in 23 hours. Now, with a goal in mind and paid for, I had to get back to working out. I started running again and I had started going to a beginner’s lunch time spin class while I was unemployed. Once spring rolled around I started popping into the local YMCA to use the pool. And on August 5th, 2012 I stood on the shore of Oneida Lake ready to plunge into my first ever triathlon. 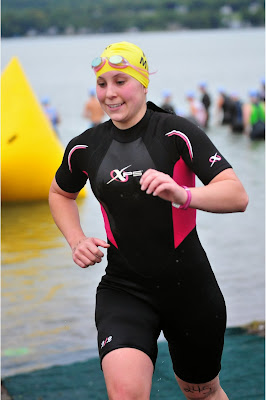 The Syracuse Iron Girl is the longest of the IG triathlons, topping out at a 600 meter swim, a 30K(18.6 mile) bike ride, and a 5k run. I crossed the finish line in 2:14:45 and something in me changed. I’ve never really been able to describe what it is about triathlon that is so different from other sports, but there is something unique, an indescribable and overwhelming feeling of accomplishment unlike that of any other sport I had participated in. And as someone who had done so many other sports throughout my life, I can say with certainty that it is something unique and great. Something just clicks that first time you cross the finish line of one. And from that point forward I was hooked. 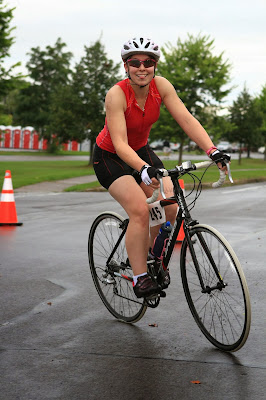 This summer I ran three triathlons, two sprints and an Olympic, and five road races including my first half marathon. I frequently place for my age group in 5k’s and 10k’s thanks to all the hard training I’ve put in. Next season I’m already looking at six potential triathlons including the grueling Rat Snake Reverse Tri and my first half Ironman, Ironman 70.3 Syracuse, which I’m already registered for. I plan on running my first full distance Ironman in 2015 either in Chattanooga or Lake placid. 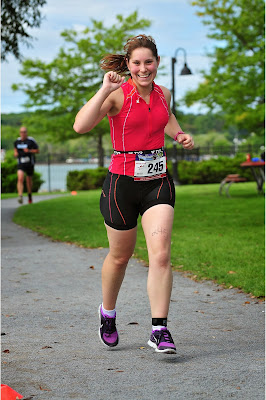 You can find Courtney online at:

Thank you Courtney for allowing me to share your story!  Best of luck with all your races next year!  I know I'll be watching and cheering you on!

Posted by Phaedra Kennedy at 9:23 AM

Thanks so much for featuring Courtney on your blog! I follow Tri Girl Chronicles and loved hearing more of her story.