Well gang, we're already halfway through November (WTH?!?) and judging by the influx of party invites that happened over the course of the weekend, the holiday insanity is literally just around the corner.  That means that my normally fairly regimented self is going to be shuffling things around over the next few weeks so I can get festive.  Thank goodness Boston training doesn't start till the week after Christmas!

This past weekend kicked off our busy season.  Friday night we were over at a friends place for drinks and we didn't get in till midnight (*gasp*).  I dragged my butt out of bed a little earlier than I wanted to thinking I'd have enough time to get my run done before we had to go out to Orangeville.  Uh, right.  I didn't so I did it when I got back.  But at least it got done.  We were in Orangeville for the MSC Triathlon awards banquet.  G and I were both getting age group awards.  It was one of my goals to get on the overall podium in this series for my age group this year.  I'm happy to say that I snagged first place in the women's 40-44 year old age category.  G got third in his age group.  What I didn't realize was that had I registered as an elite (which I could have based on my times) I would have been eligible for prize money!!  Given the fact that I actually placed as an overall finisher in 5 of my 7 races I could have had at least $250 in my pocket.  Oh well.  Next year I'll think about that, especially if I work on my bike over the winter.  However, I did get this awesome plaque with one of my favourite race photos on it. 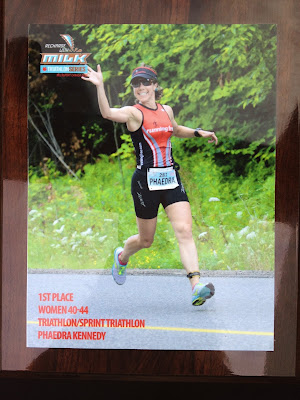 Speaking of working on my bike...I managed to last 90 minutes on the trainer yesterday without 1) losing my mind from boredom and 2) losing feeling in my crotch.  Number 2 is huge btw.   I have been having crotch issues all freaking season and it's come down to finding the right saddle.  That was my longest trainer ride this year and even then, I'm still not 100% sure about this new saddle.  Well, new to ME saddle.  It's the Adamo time trial saddle I bought G for Christmas last year.  He wanted it, I so I bought it, he ended up hating it, so now I have it.  Merry Christmas to me I guess, ha ha.  It's definitely better than my old saddle but I'm still not 100% sold.  I think it's just a bit too wide.  But I'll keep using it for the next couple of months.  Mainly because I don't want to spent the $250 on a new one right now what with Christmas just around the corner.
Speaking of Christmas...who has started their shopping?  Who's got their decorations up already?  I've bought ONE thing so far.  One.  As for decorations, since I live with the Grinch (and you thought G stood for Gary, ha ha) we probably won't have anything up until mid-December.  G isn't a huge Christmas lover....mainly because it means that winter is here and he hates winter.  So unfortunately Christmas, being at the time of year that it is, takes the brunt of the hate.  He's not a total Grinch, he's just not as enthusiastic as I am.  If I have my way, we'll have a tree in and set up by the first weekend in December.

Do you start your Christmas shopping early or wait till the last minute?  I usually start fairly early but somehow end up leaving a few things to the last minute every. single. year.

You are so cute! The year is whizzing by and the holidays are daunting. I still don't know what the heck I'm gonna do. I wonder if we can just let it slide right on by?

I cannot believe that it is already middle of November!! Where did this year go?? I haven't started Christmas shopping but I seriously need to!

Congratulations on your award! As far as Christmas goes, I'm like G - cannot stand winter, cannot stand Christmas... My kids keep working on my attitude:)

Congrats on the AG award! That's awesome. BTW, we're in the same AG so I'll have to make sure that we're not at any of the same races. LOL
I've bought nothing for Christmas yet and only have one of my sons lists. I hate the clutter that comes with Christmas. If it were up to me we wouldn't even put up a tree! LOL