This is the other part of a triathlon that a lot of people are apprehensive about.  There are a lot of things to remember to do in transition and since you're doing 3 different sports, each transition is going to deal with something different.

When you get to the race site, I'd recommend find your bib number (there is usually a chart posted) and then go directly into transition and find your spot to rack your bike.  Bikes are generally racked by bib number.  Sometimes it's done by AG (age group).  The series I race in usually does it by bib number and they try to keep age groups together by bib number i.e in the race I did last weekend my bib number was 282.  The girl that won my AG was bib 281 and the girl that came in second was bib 286.

I like to do this before I pick up my race kit or get body marked because transition can fill up pretty quickly so I like to be able to have the room to set all my things up before I go and do all that other stuff.

When you rack your bike, rack it with the seat hooked on the bar and the front wheel facing out.    You can then start to set up all the other things you'll need.  I always set up my gear to the right of my bike (it doesn't really matter which side you set it up on, I just seem to like the right side).  I usually bring a small towel to lay everything out on.  That also doubles as a place to wipe my feet when I get out of the swim if I have forgotten to bring a small hand towel.  I then lay out everything in the order that I will need it.  That means bike stuff first, followed by running stuff.   Note:  keep your helmet unbuckled so you can put the helmet on without having to undo the buckle.  I also usually keep my cycling shoes undone (they aren't in this picture) so I can just slip my feet into them.  The less you have to fuss with in T1, the faster you will be.  You're also going to want to remember where you racked your bike.  Sounds silly but if you don't pay attention to what is around you and where you are situation in transition when you're racking your bike you could run right past it (I've done that).  It's like remembering where you parked your car when you go to the mall.  G usually looks for a landmark that is somewhere near where his bike is.  I just remember the numbers posted at the end of the racks (i.e bib numbers 200-225).  Pick something that you think you'll remember. 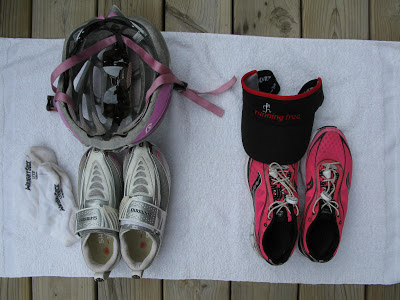 Swim to Bike:  Also known as T1 (transition one)

This is the toughest because you have to get out of your wetsuit.  That can be a struggle.  My first ever transition was just over 4 minutes.  I couldn't get out of my wetsuit.  I had the worst time trying to pull it off.   Fortunately I've had a lot of practice over the years and I think I've got it down pat (for the most part) Here's a short little how to video on wetsuit removal 101 and yes, that's me in my first ever vlog!   Sorry about the audio it's not the best, we're still trying to figure out how to shoot video on the camera, ha ha.


Once I'm out of my wetsuit, the first thing I do is grab my helmet, put it on and do it up.  As I'm putting my helmet on, I'm wiping my feet off on the towel I have laid out.  If I've brought a small hand towel, I'll give my feet a quick all over wipe before I put my socks on.  Then I put my cycling shoes and sunglasses on and then I'm good to go.  I usually wear my race number on a race belt under my wetsuit so that's one less thing I'm trying to put on in T1.

This transition is generally much faster than T1.  As soon as I've racked my bike, my helmet comes off and then my cycling shoes.  G does the opposite.  As soon as he gets into T2, he racks his bike, takes his cycling shoes off, puts his running shoes on and then takes off his helmet.  To each his own.  Figure out what way works for you and stick with it.  Once my cycling shoes are off,  I put my running shoes on, grab my visor and make my way out of transition.  I will put my visor on as I'm running.  There's no need to stand by your bike and do that, it's easy enough to do while running.

Race Day Extras you may want to have with you:

An extra towel (something small) to dry your feet with in T1.  And if it's raining, another towel to dry yourself off with after the race.
A race belt -instead of using the supplied safety pins so you're not putting holes in your nice fancy athletic wear.
Flip flops for post race wear.  You're probably going to want to let your feet breathe after all that.
Wet Wipes for post race clean up.  If it's super hot, it's nice to be able to wipe the salt off.  And they smell nice so if you clean yourself up with a couple, you probably won't stink to high heaven.
A change of clothes.  Not really necessary but given how much I sweat and how much I generally stink after a race, it's nice to get out of my smelly clothes and I'm sure everyone around me appreciates it.

I hope that you've found this series helpful!  Happy racing!

Posted by Phaedra Kennedy at 3:21 PM

Just wanted to say thank you for all these triathlon 101 posts! I remembered that you posted these a while back and I'm just reviewing them now that I'm starting to think about triathlons this year.

Wet wipes - YES!! And a pair of flip flops - feels so good getting into a pair of cozy flops after a long hot race.

Thanks for linking up your post on our Tri Talk Tuesday - your info is always so great!

All very good tips! I like the video about getting the wetsuit off. Yes it does takes lots of practice. I can finally say I have it nailed down! In fact my lady race they had wetsuit strippers I bypassed them because I was worried they wouldn't do it fast enough and mess up my system. Stubborn, I know.