I probably should have posted this yesterday since it was National Running Day but these thoughts were only seeds until last nights run when they actually bloomed.  That is one of the many things running does for me.  It somehow allows me to magically shut out all the daily chatter in my brain and just be.  It's in those moments of "be-ing" that many of my blog posts come to fruition.

When I started running 15 years ago, all I really hoped for was to shed a few pounds.  It slowly crept its way into my heart and my life until it became part of who I was.   The pounds fell away and were replaced by a level of confidence that I never thought I'd have.  Running helped me come out of my shell.  It also gave me focus and purpose.  I had finally found something that I was passionate about.   It played to my ADD tendencies.  It was ever changing and every run had the potential to be a new experience.  Some days were great and some weren't and that's what kept me coming back.  You never knew what you were going to get.

Running introduced me to a host of amazing people and a whole new world of sport.  If I hadn't started running, there is a very good chance I never would have met G.  My love of running hooked me up with my Running Love.  If I hadn't started running, I may never have ventured into the world of triathlon.  I would have missed out on the friendship of some amazing women.  Thankfully I made the choice 15 years ago to lace up my shoes and take that first step.

It's amazing how much we can take something as simple as running for granted.  As runners I don't know if we actually really think about that until we're in a situation where we can't run.  I've had a few injuries in my life and it's awful to have to sit on the sidelines.  In 2009 - 2010, I had to sit on the sidelines for a very different reason.  G and I decided to try and start a family.  We actually started trying in 2007 to no avail.  I suspected there were problems but nothing was addressed until mid 2008 when we discovered that I had stage 4 endometriosis.  I had scar tissue on almost every single internal organ.  My fallopian tubes were completely blocked.  Our doctor said there was no way I'd conceive naturally.  I remember lying in the recovery room after my laparoscopy and just crying while G held my hand.   I was heartbroken.  In the days following I wanted nothing more than to be able to go for a run but I was so sore and tired that all I could do was dream about running.   Little did I know that that would be the beginning of 2 year long roller coaster ride where everything I loved doing would take a backseat to trying to start a family.

After our last round of IVF failed in May of 2010, I immediately turned to running to ease the pain.  There were many tears shed on those runs, many curse words uttered to the universe.   I vowed to regain control over my body so I signed up for a fall marathon.  I had to have something to distract me, to change my focus to prove to myself that my body was not a failure.  After almost 2 years of early morning clinic visits,  weeks of no activity after each procedure, it was freeing to be able to lace up my shoes whenever I wanted and go for a run.   That fall marathon didn't go as I had hoped but it made me realize just how much I missed running.   In hindsight, if it wasn't for that heartbreaking journey, I can honestly say I don't think I'd be the runner that I am today.  After our emotional roller coaster ride and that disappointing fall marathon, I focused on rebuilding myself both emotionally and physically (part of that rebuilding process was starting this blog).  The physical part didn't take too long, and the emotional part, well that's still a work in progress.  Running has given me so much in the last few years, more than I could ever have dreamed.  It's given me a new found respect for my body and what it is capable of.  Instead of feeling like a failure as a woman, I now enjoy the strength that I have been able to develop.   I was given the opportunity to re-discover that initial confidence that running brought to me.  What's that saying again?   When a door closes, a window opens somewhere..?   Closing the door to having a family was not an easy choice and it wasn't without some regrets.   As the years have passed, the window that opened as a result of that choice has grown in leaps and bounds and I can honestly say, I wouldn't trade it for anything.  With every step I take, the pangs of regret and sadness grow fainter and fainter.   I look forward to a lifelong relationship with running.  As long as I'm able to walk, I'll be running and you can bet that I will be grateful for every single step. 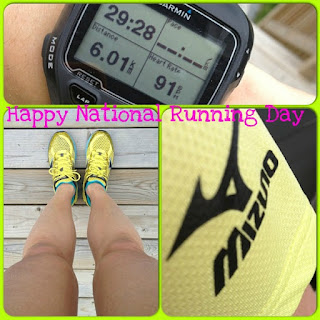 What has running brought to your life?  How has it changed you?

That's a really powerful story. Thanks for sharing. Running came to me later in life after some health issues. I now wonder why it took me so long, but I don't think I would have appreciated it as much earlier in life as I do now.

Great post! I started running at age 29, only so I could check "Run a 5K without passing out" off my list of things to do before 30. That 5K actually ended up being a 1/2 marathon and the rest is history. Running has helped me deal with life's ups and downs - without it, I am quite sure I would have needed a therapist.

Thanks Ladies!
Lisa - so true! I think the older I get the more I appreciate being able to move and push myself the way I do.
TX Runner Mom - ha ha ha, I'm right there with you!