So You Want to Try a Tri?

I remember watching the Hawaii Ironman years ago and thinking holy cow, this is amazing, I'm not sure I could ever do something like that.  Fast forward about 8 years and lo and behold I found myself toeing the start line of my first Ironman.  I didn't jump right into Ironman though.  I started short(ish) and worked my way up, much like I did with my running.  When I started running my first thought was not "I'm going to do a marathon".  It was "I'm going to do a 5km".  Then it was an 8km, then 10km and well, the rest is history.  Once I tackled the marathon, my goal was to get to Boston.  When I hit that goal in 2003, I thought ok, what next?

Actually, I knew exactly what was next.  I was going to do a triathlon.  I had been dating G for about 6 months when I went to watch him do his first Ironman in 2002.  I got completely caught up in the emotion of the day and vowed that one day I would do an Ironman.  It took me 4 years to wrap my head around it but eventually I did it.  In those 4 years, I did everything from a sprint distance race to a half Ironman.  I actually didn't jump right into triathlon though.  I started my foray into Multisport by doing a few duathlons first because I didn't feel 100% comfortable with my swimming ability.  A duathlon is a three leg race as well but it's only two sports, running and cycling.  The breakdown is run, bike, run.  It may sound easy but truthfully I think they are way harder than triathlons because your legs take a total beating.  At least with a triathlon, you start with the swim which doesn't tax your legs much.

I did a few duathlons and really enjoyed them so I figured I'd stick with this multisport thing for a while.  I found a Masters group to swim with and really concentrated on working on my swim technique.  Eventually I got the courage to sign up for my first triathlon.  I had been training with a bunch of people that were doing Ironman so my rides and my runs were already quite long.  Many of these folks also swam with my Masters group so my swim workouts gradually became longer and longer.  I knew I had the ability and endurance to do a longer race so in the summer of 2004, I opted to do the Muskoka Long Course which was a 2km swim, 55km bike and a 15km run.  It was a bit insane for me to sign up for a race like that as a first one but I didn't know any better and all of my friends were doing it.   The most daunting part for me was the open water swim.  In retrospect, I probably should have signed up for a sprint race (750m swim, 30km bike and 5 - 7.5km run depending).  However, I never really felt like I was in over my head other than in the swim and I think that was just due to anxiety.

Luckily most race series now offer shorter distance races for folks that just want to try a triathlon to get a feel for it without perhaps having to put in a ton of time training depending on their athletic background.  The two Ontario series, Subaru and Recharge With Milk (also known as Multisport Canada), offer either Try a Tri (Subaru) or Give it a Tri (Recharge).  The distances are usually a 300-400m swim, 10km bike and 2km run.  Easily doable if you have a decent endurance base.  Easily attainable even if you don't.  Like any endurance event, it will require training.  A 300m swim would be 12 laps in a 25m pool.   A 10km bike ride at 20km an hour would take you half an hour and a 2km run maybe 10-15 minutes depending on how your legs feel.  And then there are your transitions:  swim to bike and bike to run.  These count against your race time so the faster you are in transition, the better.  It's essentially free speed if you're quick at them.  I'll address the "art" of the transition in a separate post.

It's easy to get a bit intimidated by all the fancy gear in triathlon.  If you're just going to try the sport out, I don't think there is any need to invest any serious amount of money into it.   My sister did her first triathlon on G's old mountain bike (we put slicks on it instead of the knobby tires), I lent her my wetsuit and a pair of cycling shorts and my bike helmet and she already had a decent pair of running shoes.   Voila, she was good to go.

In my opinion, these are the essential basics you'll need to do your first triathlon comfortably.

Wetsuit - If you're the slightest bit apprehensive about open water swimming, I would highly recommend looking into renting one.  There are lots of places that rent them nowadays.  They provide buoyancy which comes in handy if you happen to have a panic attack in the middle of a swim (like I've done) and you feel the need to roll over on your back and float for a bit just to calm down.  They also put your body in the most optimal position for swimming so it generally makes swimming a whole lot easier.   The less energy you expend in the swim, the better you'll feel on the bike.

Goggles - Seems like a no brainer but I've seen people try to swim open water without them.  Not easy.   For open water swimming, I recommend something that is tinted.  There's nothing worse than trying to sight a buoy and being blinded by the sun.

Fitted Attire -  If you're going to be putting a wetsuit on, I'd recommend wearing spandex shorts and for women, a fitted tank top underneath.  You're generally not able to change in transition in the shorter distance races.  Well I suppose you can if you don't mind stripping down in public.  I say fitted clothing because once you get on the bike, you're not really going to want to have shorts and a t-shirt flapping around in the wind.  It can be annoying and somewhat uncomfortable, especially since loose shorts tend to ride up your legs.  But, the important thing is to wear what you are comfortable in.  If it flaps in the wind, so be it.

Bike Helmet - This is mandatory.  You will not be allowed out on the bike course without one.  Beg, borrow or steal one.  Although if you are riding your bike without one, then SHAME ON YOU.

Good Running Shoes -   Even though you're only running 2, maybe 3km, I think it's important to run in proper running shoes.   Cross trainers and the like will only give you blisters and / or shin splints and that's not fun.

A Smile - Even if it hurts a bit (which I'm sure it will) smiling generally makes you forget you're hurting and there are always photographers out on the race course!

Over the next week, I'll talk about each leg of the race along with the various rules of the sport so if you're planning on trying a tri anytime soon, stay tuned!

Do you have any other questions or things you want to see addressed in the next few posts?  If so, ask away!! 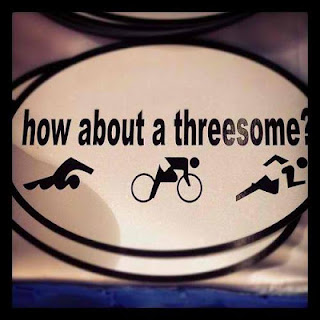 Posted by Phaedra Kennedy at 11:46 AM

Thank you for sharing this! Do you think it's worth it to get a tri suit instead of wearing cycling shorts/tank under a wetsuit? Trying to decide which is the better investment. Or is that even how a tri suit works? LOL I'm such a newb.